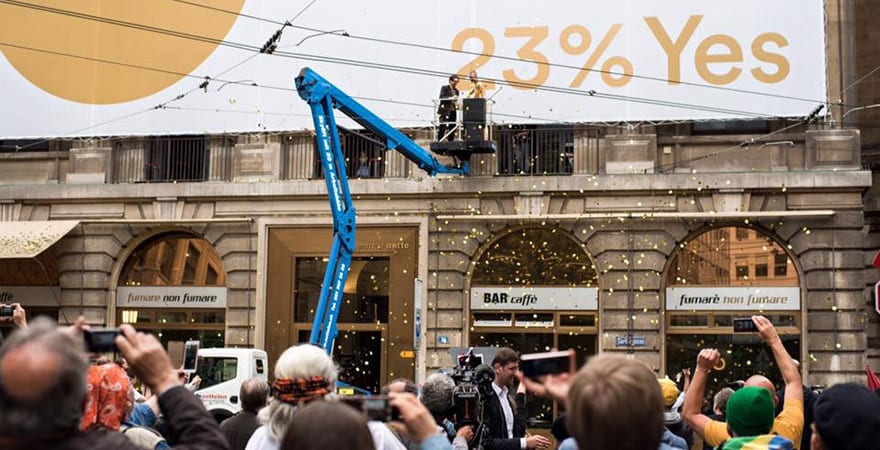 On June 5, 2016, Swiss people voted on a referendum that included a question about implementing a universal basic income. Although the official text for the vote did not specify the level, the campaigners proposed 2,500 Swiss francs for adults and 625 francs for children per month.

The referendum on Unconditional Base Income (UBI), as they call it, has been building since 2013 when the Swiss Citizen’s Initiative, co-initiated by Enno Schmidt, gathered enough signatures (more than 100,000) to successfully trigger their right to have a national referendum on the issue. Although the Swiss Federal Council rejected the initiative in August 2014, the rejection was more of a symbolic suggestion to vote against the basic income than a consequential political action: the Swiss people had already asserted their constitutional right to the referendum.

Basic income advocates utilized headline-grabbing tactics to gain publicity for the referendum.  Upon submitting the initiative in 2013, basic income supporters dumped 8 million five-rappen coins (one for each Swiss citizen) outside the Federal Palace in Bern. Then, in the final weeks before the vote, members of the Swiss Initiative for an Unconditional Basic Income unveiled a poster that broke the poster size world record.

While this referendum may have been voted down, the Swiss basic income movement helped spark an international dialogue on how a basic income can help fix issues related to poverty, social policy, and technology, among other topics.  This conversation has caught the imaginations of citizens all over the world and has led to commitments from governments or non-profit organizations to establish basic income pilot projects in Finland, the Netherlands, Canada, Uganda, Kenya, India, and in Silicon Valley, as well as public considerations for basic income research in New Zealand, the United Kingdom, France, and Namibia. This dialogue is truly global, and media outlets all over the world have begun writing articles and making videos debating the merits and principles for a basic income.

Even with a defeated referendum, the basic income movement is poised to march forward toward a brighter future in the coming years: thanks, in part, to the efforts of the Swiss basic income advocates who triggered this momentous referendum.  We extend a special “thank you” from the BI News editorial team to all of those involved in the Swiss movement who have publicized basic income and worked so tirelessly on this referendum.

More information on the results themselves can be seen here.