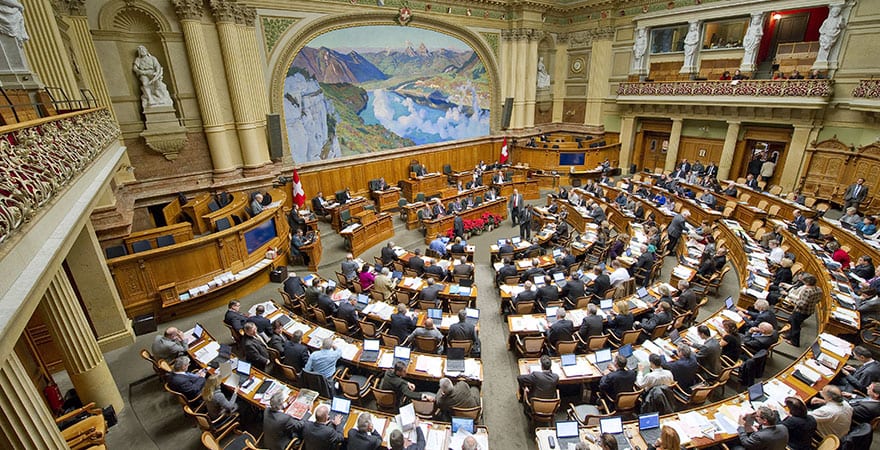 Last week (Sept 23rd 2015) the Swiss Parliament voted for a motion calling on the Swiss people to reject the Popular Initiative for Unconditional Basic Income.

Update: the date of the referendum has be set to 5th June 2016

After hours of debate, the National council (the lower house of the Federal Assembly of Switzerland) voted for a recommendation by the ruling party to reject the popular initiative for unconditional basic income after six hours of debate.

The motion was passed with a large majority (146 votes), with only a minority of 14 MPs supporting the initiative and 12 abstentions (see the detailed vote report here).

“The most dangerous and harmful initiative ever”

Basic income was opposed by all political groups, but the harshest critics came from the Centre and Right-wing parties. Sebastian Frehner (Centrist) described the initiative as “the most dangerous and harmful initiative that has ever been submitted,” mentioning the risks of immigration, disincentive to work, and that the basic income proposed would not be financeable anyway.

For similar reasons, the Liberal party spokesman Daniel Stolz described the initiative as “intellectually stimulating,” but that it is also a “cocked hand grenade that threatens to tear the whole system to pieces.” His party colleague Ausserrhoden Andrea Caroni spoke of basic income as a “bomb in the heart of our society and our economy.”

The most noticeable supporter of basic income was probably the Socialist MP Silvia Schenker who argued that basic income was the answer to the complexity and loopholes of the current welfare system and a better way to integrate the people “who have no place in the world of work.”

This was not enough however to convince the Greens and other Socialists. “The Greens support the objectives of the Popular Initiative for an Unconditional Basic Income, but as it stands, it endangers our social system,” said Christian van Singer, spokesperson for the Greens. He argued that while one goal of the initiative is to simplify the social system, “it could level down the benefit system to the detriment of those who do not find work or cannot work.”

Similarly, the Socialist MP Jean-Christophe Schwaab said he opposed basic income because it could be a pretext to dismantle the welfare system and reduce wages. 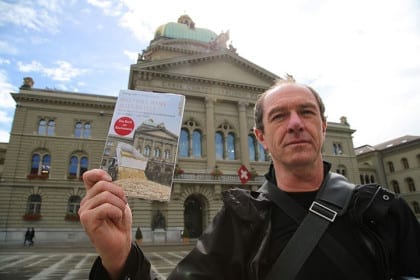 Basic income campaigners just published a new book and distributed in front of the Parliament.

Ironically, while politicians were voting against basic income by a large majority, an online poll (Tagesanzeiger.ch) showed that 49% of the Swiss would vote in favour, while 43% are against it, and another 8% said it depends on the amount.

The general outcome of the six-hour session was not a surprise. The strong opposition to basic income followed a similar opinion from the Federal Council (the executive branch of government) which rejected the initiative in August 2014. Earlier this year the two relevant parliamentary committees on social affairs had also recommended opposition to the initiative. The Upper chamber of the Parliament will deliberate on the issue over the winter.

Under the Swiss Constitution, all citizens’ initiatives that collect more than 100,000 signatures get the right to have a referendum. However, this referendum only takes place after a series of official deliberations in the Federal Council and the National Council. In practice, this can allow the legislative power to immediately adopt into law proposed citizens’ initiatives if representatives agree with it, thus accelerating the process.

This vote is therefore not decisive, it is only a recommendation. Whatever the politicians decide, a nationwide referendum will be organised for 2016.

The Popular Initiative for Unconditional Basic Income was launched in March 2012 and successfully collected 125,000 signatures by October 2014.

“Politicians are afraid of the People”

Despite the unsuccessful vote in Parliament, “The debate was good for the idea and the movement for Basic Income,” wrote basic income campaigner Che Wagner in a column for the Swiss newspaper Tages Woches.

Wagner said the debate revealed how afraid politicians are of the people: “Among the political class, the fear has spread, a threat has been identified: they are afraid of the people of this country and their potential epidemic laziness. Until the referendum in Autumn 2016 we will find out whether and how much these dangerous people are afraid of themselves too.”