US: Poll of “Left Agenda” Examines Support for Basic Income

A recently released survey shows support for an income-tax-funded basic income from people of color and the working class, but opposition from college-educated white Americans.

The think tank hopes to remedy a lack of data concerning voter support for such policies, policies that politicians might be inclined to dismiss as too radical to gain sufficient support from the electorate:

“Because the policies that are exciting progressive voters have not yet caught the attention of most pollsters, debates over how ready the broader electorate is for a more progressive Democratic platform have been reduced to mere speculation. We set out to change that … We chose policies that haven’t been polled often, but could be central to the 2020 Presidential election.”

Policies considered in the poll included not only UBI but also a federal job guarantee, a stakeholder grant or “baby bond”, reparations for black Americans, and a 90 percent marginal income tax on millionaires, among other proposals.

In collaboration with YouGov Blue (a division of market research organization YouGov that serves clients from the political left), Data for Progress interviewed 1515 eligible US voters between July 13 and 16, 2018. Respondents were randomly selected and represented the full US political spectrum, not only progressives (e.g. about 44 percent of respondents who voted in the 2016 Presidential election backed Republican nominee Donald Trump).

Although the survey did not explicitly use the term, UBI was the intended target of one of the survey’s ten policy questions:

Would you support or oppose giving every American a monthly check from the government of $1,000, which would be paid for by raising taxes on individuals earning more than $150,000 a year?

Overall, 37 percent of respondents supported the policy (23 percent strongly and 14 percent “somewhat”), while 43 percent opposed it (31 percent strongly), and the rest remained neutral or undecided. However, as discussed below, net support for the policy was observed within some demographic groups, such as Blacks, Hispanics, women, eligible voters under 45 years of age, and those without any college education.

It bears note that the questionnaire did not query respondents about UBI per se but about a specific type of UBI: one of a certain specified amount (US$1000 per month) and funding mechanism (a higher personal income tax for individuals making more than US$150,000 per year).

Because of this, we must be cautious in making comparisons between the Data for Progress poll and other recent surveys of Americans’ opinions on UBI, such as those conducted in 2017 by Ipsos, Morning Consult, or Gallup, or the poll commissioned by the Economic Security Project in 2016. None of the latter polls included reference to a specific amount or funding mechanism in initial questions about UBI (although some proposed specific sources of funds in follow-up questions). At the same time, included other extraneous qualifications (e.g. Gallup’s poll asked specifically about a UBI introduced “as a way to help Americans who lose their jobs because of advances in artificial intelligence”). Thus, although ostensibly all surveys about Americans’ attitudes UBI, these studies cannot be said all to have measured the exact same thing.

Of particular significance is the fact that the Data for Progress questionnaire asked specifically about a UBI funded by a personal income tax. Data from earlier surveys already indicate that support for UBI decreases when respondents are told that the program would be accompanied by higher taxes.

A 2017 survey of British adults, for example, found that 49 percent of respondents would support “a regular income paid in cash to every individual adult in the UK, regardless of their working status and income from other sources”, but support dropped to 30 percent if the policy would entail an increase in taxes. Similarly, as Jurgen De Wispelaere has pointed out, a government-sponsored working group in Finland “found that Finnish support for basic income decreased quite radically once questions about the amount of basic income are paired with corresponding questions about the taxes needed to fund it”. And a 2016 Canadian poll found 67 percent of respondents in favor of a guaranteed income of C$30,000 per year, but only 34 percent said they themselves would be willing to pay more in taxes to support a government-sponsored guaranteed income.

Past American surveys have shown similar results. In the aforementioned Gallup poll, 48 percent of individuals surveyed supported “a universal basic income program as a way to help Americans who lose their jobs because of advances in artificial intelligence”. However, out of those who expressed support for the program, only a minority (46 percent) replied affirmatively to a follow-up question asking whether they would be willing to pay higher taxes to fund it. Moreover, the Economic Security Project study revealed a drop in support for a “base income” from 45 to 39 percent, and an increase in opposition from 35 to 50 percent, after respondents were informed that the program “would be paid for by tax revenues”. Notably in the latter case, the survey respondents were not told specifically that they themselves would have to pay higher taxes.

It is not uncommon to hear American basic income advocates speak of a US$1000 basic income funded in part by an increase in personal income taxes. However, there are other reasons why details are not immaterial. For one important example, note that UBI proponents also frequently cite the popularity of Alaska’s Permanent Fund Dividend (PFD), an unconditional cash payment to all state residents, to argue that the policy could garner mainstream appeal in the US. The PFD, however, is a vastly different program from the description specified in the Data for Progress poll: Alaska’s PFD is distributed annually rather than monthly, closer to US$1000 per year than per month (its amount varies but stood at US$1100 in 2017 and US$1022 in 2016), and funded not from personal income taxes — Alaska is, in fact, one of a handful of US states with no state income tax — but from investment earnings on revenue from oil and other state-owned resources.

I will make one final note on questionnaire wording before turning to examine some results of “Polling the Left Agenda” in more detail: it is also important be mindful of what details are not explicitly noted in the survey question on UBI, such as the fact that the payment is not conditional on work or other requirements. The previously cited Economic Security Project survey found that support also declined when respondents were directly told that receipt of a UBI “is not tied to work or having a job” or that the money “could be used for anything”. Although the unconditionality of the grant is implicit in the description of “giving every American a monthly check”, individuals’ reactions and responses can vary depending one what is made salient and explicit when questioned.

The UBI proposal received the strongest support from people of color and non-college educated Americans (or “working class” as Data for Progress labels the latter group). 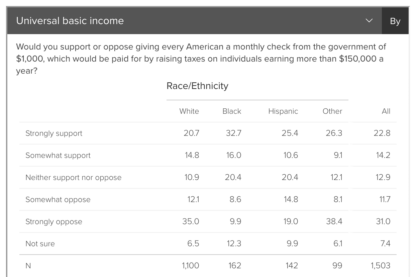 Across education levels, the policy proposal received net support only among those with no college education (40 percent in support to 29 percent opposed). Overall, over 40 percent of college graduates strongly opposed the policy. 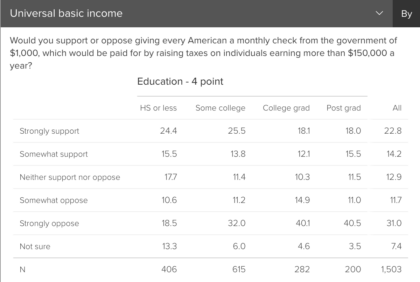 These demographic trends remain consistent with the results of the 2017 National Tracking Poll conducted by Morning Consult and Politico, which queried over 1400 eligible US voters on their support or opposition to “a proposal in which the government would provide all Americans a regular, unconditional sum of money, sometimes referred to as universal basic income” (see the discussion by Patrick Hoare in a Basic Income News article on the survey).

The UBI proposal also received majority support from respondents who voted for Democratic candidate Hillary Clinton during the 2016 presidential election, with 35 percent of Clinton voters strongly supporting the policy. (We might here note that, while Clinton herself is sometimes classified as a UBI supporter due to a jettisoned proposal described in her memoir, she opposed UBI during her campaign, and her rejected proposal was for a resource dividend inspired by Alaska’s PFD, not financed by a higher personal income taxes.)

In contrast, less than 17 percent of Trump voters in the survey supported the idea of an income-tax-funded UBI. Indeed, among those who voted for the Republican candidate, 64 percent strongly opposed the policy. 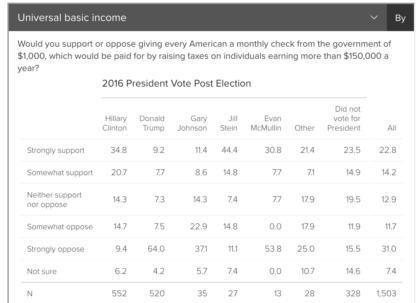 Once again, this result aligns with last year’s National Tracking Poll, which found that 56 percent of Clinton voters supported a UBI, with 28 percent opposed to the proposal. In contrast, only 32 percent of respondents who voted for Trump expressed support for the idea of UBI, while 52 percent expressed opposition. Similarly, the Gallup poll found that only 28 percent of Republican respondents supported UBI as a policy to address technological unemployment, in contrast to 65 percent of Democrats.

Some UBI supporters, being keen to depict the policy as broadly trans-partisan (“not left or right but forward”), might balk at portraying the idea as specifically “progressive” or as a potential part of “the left agenda”. If these recent surveys are a valid measure, however, there is evidence that UBI is indeed an idea that strikes a much greater resonance with America’s left.

Women displayed a slight margin of net support for the proposal (39 percent to 37 percent), although 10 percent remained unsure, while male respondents rejected the idea 50 percent to 35 percent (with 4 percent remaining unsure).

Additionally, while the policy proposal garnered net support from young voters (in both the “under 30” and “30-44” age groups), it received net opposition from those 45 and older, and nearly half of respondents over 65 strongly opposed it. 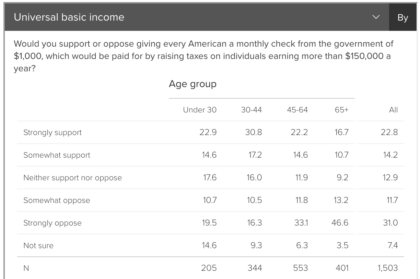 Again, these general demographic trends tend to reflect previous survey research, such as the 2017 Gallup poll, which found greater supporter for UBI among female respondents and declining support through each of its four age categories. The National Tracking Poll also revealed stronger opposition from older age groups (especially among those over 65). In the latter survey, however, men were seen to be slightly more favorable to a general UBI proposal than were women.

Finally, the Data for Progress poll showed that lower incomes tend to be associated with a higher degree of support for UBI; while supporters outnumbered opponents among respondents with family incomes under US$40,000 per year, opponents predominated in higher income categories. This finding also remains consistent with other recent studies.

Reaction from The Nation

So, then, is basic income a viable progressive proposal? Should Democrats back the idea in the 2020 election? Journalist Clio Chang is one commentator who believes that the survey results do indeed suggest an affirmative answer, as she writes in The Nation, the popular American progressive political journal:

“[S]ome sort of cash welfare should be part of the progressive agenda, not in small part because it would help blow up the racist idea that benefits should be tied to work and finally kill Reagan’s welfare-queen myth. As the polling shows, even the most radically progressive proposals are not the political death sentences that critics would have you believe.”