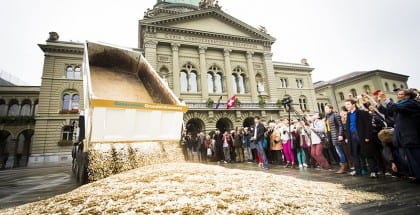 Yesterday, the Swiss voted on the proposal to provide a basic income sufficient to allow the people to live in a dignified manner and participate in public life. The proposal was voted down with 23.1% of the voters in favour and 76.9% against. With a participation rate of 46.3% that boils down to little over 10% of the Swiss population supporting basic income. No doubt the Swiss campaigners as well as those watching the referendum closely will be conducting a post-mortem of what happened and how to interpret these results.

I for one believe this is a result that the Swiss campaign should be proud of. A 23% yes vote in a popular vote against the background of pretty much unanimous establishment resistance is a major achievement. Yesterday’s vote breaks firm ground for a basic income debate in years to come. The Swiss debate is not over, not by a long shot! Perhaps even more importantly, as many commentators have rightly pointed out, the Swiss campaign – one of the most creative and professional I have seen in a long time – managed to create wave after wave in the media. With policy attention following media attention, it is fair to say without the Swiss we wouldn’t be where we are now in Finland, Netherlands, Canada or France. So for that, Switzerland we thank you!

But appreciating what Switzerland has achieved shouldn’t prevent us from asking important (and perhaps some hard) questions about what happened or didn’t happen in the Swiss campaign. What political strategy lessons can we learn from Switzerland? And how can we use those lessons in countries as diverse as Finland, Canada or Portugal? We can all learn from the Swiss experience, and conversely this is the time for the Swiss campaign to educate us on the upsides and downsides of their strategies.

One obvious point of contention – one that affects every jurisdiction campaigning for basic income – is whether to promote the principle of an unconditional and universal basic income granted or instead to focus on a concrete proposal, including a clear indication of how high the basic income will be and how it would be funded. The Swiss referendum asked voters to vote on the principled argument, leaving both amount and funding to be determined by legislation. This may put off some voters who are risk- and, above all, ambiguity-averse (preferring current certainty over future possibility). Partly to counter this, the Swiss campaigned for a basic income pitched at 2,500 Swiss francs (approximately €2250, £1,750 or USD2,555). Many no doubt will argue that this high sum traded-off uncertainty for genuine anxiety amongst many voters, and that a lower level of basic income may have been a more prudent approach. The reality is we don’t really know, and for that reason a genuine post-mortem would be a very useful step going forward.

I’d like to point out another lesson from the Swiss referendum, and perhaps an uncomfortable one for most basic income advocates. In recent months a number of polls have been put forward indicating growing levels of support for basic income. Most recently there was the Dahlia Research poll which suggested on average 64% (of surveyed EU countries) were supportive of a basic income. These results are regarded as indicative or even evidence of robust basic income support. But the Swiss case puts a sobering note here. A poll conducted in April asking 20000 Swiss citizens their voting intentions found 40% intended to vote in favour. The reality turned out quite different, with only 10% of Swiss coming up to vote and then voting yes.

This shouldn’t surprise us because political polling is a notoriously difficult enterprise, and polls around basic income are easily influenced by framing of the questions as well as real-world events. For an example of the latter, the Finnish working group coordinated by Kela found that Finnish support for basic income decreased quite radically once questions about the amount of basic income are paired with corresponding questions about the taxes needed to fund it. This is also why we should really stop being overexcited by polls claiming to offer evidence that only 2% (or 4%, or whatever really) of surveyed individuals would stop working: the so-called social desirability bias means that polls are simply the wrong tool to answer the question of what people would do when they get a basic income.

The bigger question – and lesson to be learned from Switzerland – is whether we have a really good understanding of the level of support for basic income amongst ordinary citizens as well as key policy stakeholders. Basic income support is growing as more people become familiar with the idea, but there is still a lot of work to be done understanding how to translate this support into a robust political constituency. I think our Swiss friends will be able to help us understand the next steps to push basic income onto the policy agenda.

Jurgen De Wispelaere is a Visiting Research Fellow at the University of Tampere (Finland), where he is part of the Kela-led research team preparing a national basic income experiment in Finland.