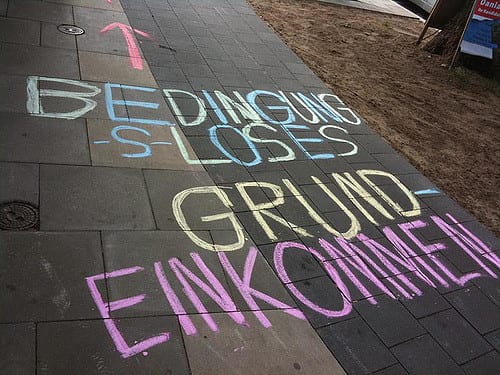 Ipsos, a Paris-based market research and consulting firm, has published the results of a multinational opinion survey on basic income, surveying 9500 people in 12 countries.

Between April 21 and May 5, 2017, Ipsos collected online survey data from a total of approximately 9500 individuals, drawn from 12 countries. The firm polled about 1000 individuals in each of Canada, France, Germany, Italy, Spain, the United Kingdom, and the United States, and about 500 in each of Belgium, Mexico, Poland, Serbia, and Sweden. (Note that, at a 95% confidence level, the margin of error is about 3.1% for a sample of 1000 and 4.4% for a sample of 500.)

Survey participants were selected among adults aged 18 to 64 in the US and Canada, and adults aged 16 to 64 in other countries. Ipsos notes that the samples in Mexico and Serbia should not be considered representative of the countries’ populations since, in these countries, respondents to online surveys are disproportionately urban, affluent, and well-educated. For the other 10 countries, the results were weighted to reflect the demographics of each respective country’s adult population, according to its most recent census data.

The survey queried respondents on whether they agreed or disagreed (or neither) with the following statements:

Respondents in Poland, Germany, the US, and Canada were the most optimistic about the ability of basic income to alleviate domestic poverty and allow people to spend more time with families and local communities. Those in France were the most pessimistic about all three outcomes. In general, respondents were more accepting of basic income’s ability to ameliorate poverty or increase family time than its ability to promote community involvement.

American and French respondents demonstrated the greatest rates of concern that a basic income would make people financially dependent on the state, discourage labor market participation, and increase taxation to unaffordable levels. In all countries but Germany, a majority of respondents expressed agreement with the first concern. And, in all but Sweden, a majority expressed agreement with the second.

For the full breakdown of responses by country, with percentages, see Ipsos’ “Public Perspectives” report (note that this particular report is framed for a Canadian audience).

Ipsos’ survey is one of the largest multinational opinion surveys on basic income since Dalia Research’s EU-wide survey conducted in March 2017. In general, the Ipsos data suggest lower support for basic income among Europeans than do those of Dalia Research (although a full analysis and comparison is well beyond the scope of the present article).