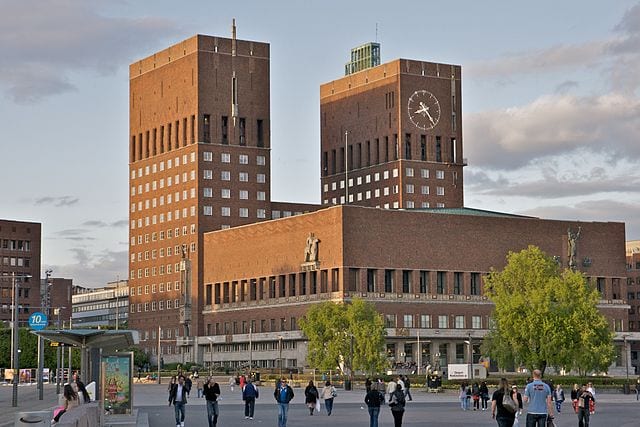 The conference,organized by the Norwegian Labour and Welfare Administration, which also include discussion of Finland’s impending basic income experiment.

More information about the conference (in Norwegian) is available here: “Nordisk sosialforsikringsmøte 2016” (NAV).

Later in the month, Standing will speak at the I.S.E.O. Summer School in Italy, which will also feature lectures from three Nobel laureates in economics, and Folkemødet, a gathering of Danish politicians and political activists.

This is the video from the biannual conference held by the Norwegian Social Forum (Norwegian branch of the World Social Forum), composed by BIEN Norway and 65 other member organizations. Guy Standing, Ståle Wig (University of Oslo), Hilde Opoku (Green Party in Norway) and Eve Kløve (NORAD) were some of the speakers at the event.

“Basic income is a radical idea which has gained more attention in many countries in recent years, as traditional welfare states are having trouble solving the problems they were created to solve. Basic income promises to solve many of these problems in an effective and simple way. The purpose of this thesis is to study basic income in a way which can supplement the existing literature, and make it relevant in a Norwegian perspective. Hopefully this can contribute towards placing basic income on the political agenda and in the public debate. A large amount of literature is written on basic income, but by comparing the arguments used to promote a basic income with empirical data from previously implemented social policy in Norway, I hope to contribute towards an area which is not well covered.

To do this I identify the arguments used to promote a basic income, and compare them to the arguments used to promote other universal social policy in Norway at the time they were introduced. The empirical cases of the universal child benefit and the universal old age pension in Norway has been chosen, because they resemble a basic income in many ways. The study is of a qualitative nature, and the method of document analysis is used to conduct the study. The data material for basic income is mainly scholarly literature. The data materials used for the analysis of the child benefit scheme and the old age pension are government documents, mainly preparatory work for new laws, legal propositions put forward in parliament, white papers, and transcripts of debates in parliament.

SUMMARY: This article argues for a citizens’ wages to all income without any obligation, saying such a scheme would go a long way in fighting poverty, and asking why are there no politicians who talk about it. The author presents the idea in general, and asks whether we can afford it, writing about poverty traps and about the moral issue of reciprocity. She concludes; this will be a tremendous help for those who find themselves in the labor market’s external borders, at the intersection of work and social security.

This article contains four detailed responses to an article written by Chris Armstrong about Sovereign Wealth Funds and global justice. The responses are by Oliviero Angeli, Andreas Follesdal, Angela Cummine, and Paul Segal. Some of the discussion involves the possibility of distributing oil revenue in the form of a dividend basic income guarantee.