My name is Jonathan Berg. I have been working as a medical anthropologist doing research with people living in poverty and marginalization since 2012. I currently work at the Erasmus University. In the past few years I have been involved as a researcher with an experiment in the Netherlands which I think might be of interest to BIEN website visitors.

For a period of three years, a group of 14 people under forensic psychiatric care (meaning having a criminal history and a severe mental affliction), received an almost rule-free extra income to find out if taking away their financial stress (scarcity theory) would reduce the amount of public nuisance they caused and crimes committed. All they had to do to keep receiving the money was: 1) not be incarcerated, 2) have an address in the city where the experiment took place, and 3) talk to researchers every 6 months.

We did a longitudinal qualitative study using the case history method to carefully map all developments and thus were able to study and describe the lives of the participants and observe changes in their behavior. When we first met the participants, many of them were living in in cycles of: poverty, debts, violent or criminal behavior, psychiatric troubles, and drug use. With little to no perspective of any improvement, many lacked the ability to see a future for themselves and some saw only death as a way out of their misery.

Since these participants often had a history of substance abuse, there were worries that they would spend the income of alcohol and drugs. However, a negligible amount the money actually was thus spent. Instead, they spent it making their houses more livable, and on food, self care, medical costs, transportation, and social activities. For most of the participants the money meant a world of change and we noted an overall improvement in their mental wellbeing and a decrease in the risk of recidivism.

We saw three ways in which the steady extra income helped reduce violent or otherwise criminal behavior. Firstly, the extra money provided income security. This made them less dependent on undeclared work and crime to make ends meet. Secondly, they had less financial stress, so they could control their impulses better and were better able to cope with setbacks that would have otherwise triggered, for example, violent behavior. Thirdly, they cherished the improved quality of life due to the extra income, and did not want to risk loosing it. Therefore, they were more thoughtful about any behaviors that might come with the risk of incarceration, since that would (temporarily) stop the monthly payment.

Unsurprisingly, during the experiment the participants did not turn into model citizens and we observed many other influences inhibiting them from living in the ways that they wanted. But, as one of the participants said: “Money is not everything, but everything is money”. It seems that for people living in extremely marginalized situations, like forensic psychiatric clients, a guaranteed minimum income could help shape preconditions needed to escape their chains of poverty, psychological afflictions, stress, and criminal or aggressive behavior.

Our research report, including all the inspiring and sometimes confrontational stories of the participants, is currently only available in Dutch. We will work on publishing it in an international academic journal at a later stage, but that will take some time.

The initiative for this experiment was taken by Irene Veldhuis and Wouter Boekweit, who at the time both worked in forensic psychiatric care. The Research was done by Jonathan Berg and Dorien Mul.

A Research Agenda for Basic Income

Malcolm Torry has been asked by Edward Elgar Publishing to write a book with the title A Research Agenda for Basic Income. To ensure that what he writes will be as useful and comprehensive as possible, he would like to receive as many answers as possible to the question:

What research is now required?

He will use the submissions to create a consultation paper on which further consultation can then take place.

Your reward will be a mention in the acknowledgements.

Dr. Malcolm Torry is a Visiting Fellow at the Institute for Policy Research at the University of Bath, the treasurer of BIEN, author of a number of books about Basic Income, and editor of the Palgrave International Handbook of Basic Income: https://torry.org.uk/basic-income.

A new project from FRIBIS: Universal Basic Income and Gender

The Freiburg Institute for Basic Income Studies (FRIBIS), a network of several faculties at the University of Freiburg, has expanded with a new international team which focuses on basic income and gender issues, pulled together by Enno Schmidt. It uses as a starting point, the study by Prof. Toru Yamamori on the British women’s liberation movement in 1970’s, which was already calling for a UBI. According to Yamamori, grassroots feminist economic and political thought forms a basis of the demand for basic income, and the beginning of this can be seen during the women’s liberation movement in 1970’s Britain. For this reason, the relationship between grassroots feminist economic and political thought and basic income deserves to be re-examined, as this area has often been overlooked.

As a comprehensive research and design goal, the initiative seeks to examine grassroots feminist economic understanding and behavior and its potential in forming a new social contract with a particular focus on asic income. Based on this main principle, to amplify the voice of women in basic income research and design, the initiative seeks three objectives.. First, the further elaboration of Toru Yamamori’s study with final book publication, supported in particular by the collaboration of Barb Jacobson and Dr. Liz Fouksman in the UK. Secondly, a study and documentation on the question of women’s understanding of and behaviour in the economy and cooperation with members of the Self-Employed Women’s Association (SEWA) in India under guidance of Renana Jhabvala. This will be supplemented by similar empirical research by Liz Fouksman in South Africa and Prof. Dr. Kaori Katada in Japan and by the experiences, data and results of basic income projects in Canada by Chloe Halpenny. As a third goal, enriched by the outputs of the other 2 goals, the initiative aims to embed their relevance in a potential new social contract for real gender equality. This is planned to be introduced as a pilot project, in a yet to be determined region in the USA under the guidance of Prof. Dr. Almaz Zelleke and others to come. However, the team is also open to new influences and directions that arise during the collaboration, for example an additional focus on China.

For these purposes, the research programme will take place in 4 stages. The first phase will include a manifesto and presentations based on research which is already ongoing and which will start shortly. At this stage, the data, interviews and questionnaires of the participating researchers will be used. In the second phase, the focus will be on the collective reconstruction and articulation of “grassroots feminist economic and political thought”. At this stage, the experiences of relevant people in the research team will be used. In the third stage, the aim is to determine the positions of the above research in academic disciplines. In this sense, theoretical and anthropological studies will be carried out at this stage and the theoretical infrastructure of the outputs of the first two stages will be established. Based on the presentation and evaluation of the nature of women’s cooperation and work, and women’s perspectives on work and economy, this will significantly benefit from the experience of SEWA, and the Basic Income Pilot Projects for women in New Delhi and the 2009-10 pilot project in Madhya Pradesh. The fourth and final stage as envisaged so far, will include the implementation of UBI and new laws in a community in the USA.

In summary, the project aims to combine the introduction of a basic income and the creation of a new social contract from the point of view of women. The output that is intended to be reached at the end of the project is the draft of a new social contract. In other words, the main goal here is to present in a holistic way a draft programme for a society based on unconditional basic income, which is necessary to bring women to equal status with men.

Further information about the initiative and the project can be found at the following links:

Endless thanks to Enno Schmidt for his valuable contribution to this article.

Four Chinese students have been working with BIEN for three months

From the 24th May to the 24th August 2021 four Chinese students undertook internships with BIEN. They attended a five day introductory course about Basic Income and the global Basic Income debate, translated pages and posts on the BIEN website into Chinese, summarised in English relevant documents in Chinese, constructed individual Basic Income schemes for China and worked together to create a joint Basic Income scheme, completed individual projects that connected what they had learnt about Basic Income with the subjects of their degrees, and attended the BIEN congress. it was a pleasure to be able to work with such intelligent and motivated students.

The translations of pages and posts on the BIEN website into Chinese can be found here;

summaries in English of relevant documents in Chinese here;

and the Basic Income scheme for China that the students created together is here.

Our thanks to Amanda, Sherry, Qihao and Joey for working with BIEN; to Dr. Furui Cheng, Tyler Prochazka, Li-Hsin Leen, Dr. Leah Hamilton, and other members of the Executive Committee, for assistance with the introductory course and other aspects of the internship programme; and to the Global Cultural Adventurers organisation for finding such intelligent and committed students for us to work with. 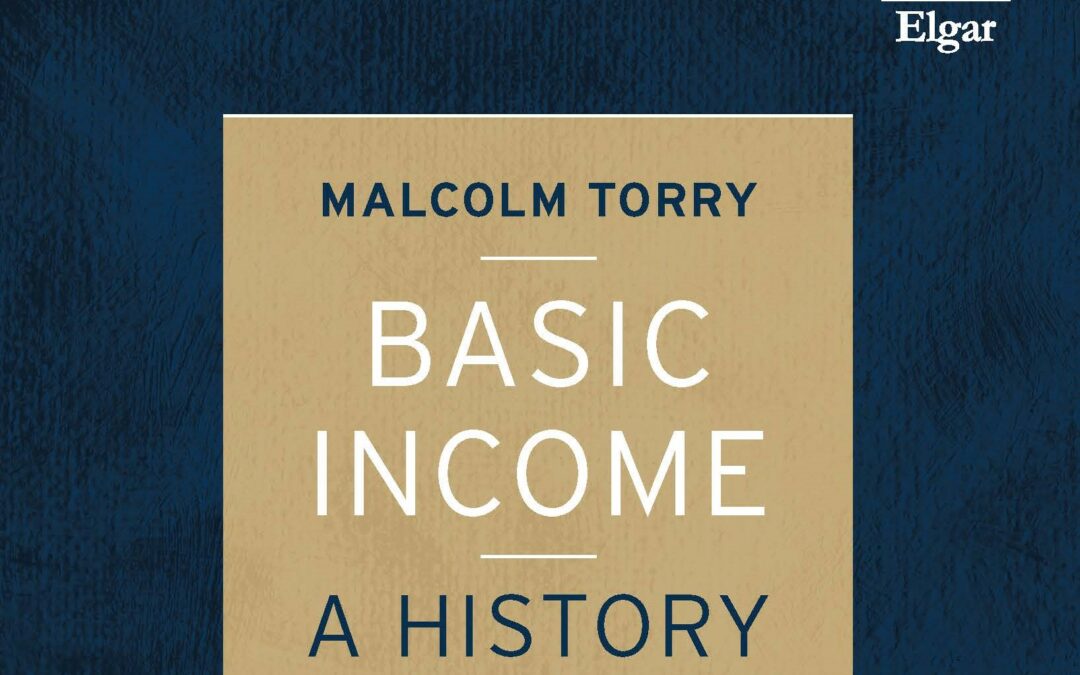 A comprehensive history of Basic Income

A comprehensive history of Basic Income is to be published this month.

The publisher says this about the book:

Presenting a truly comprehensive history of Basic Income, Malcolm Torry explores the evolution of the concept of a regular unconditional income for every individual, as well as examining other types of income as they relate to its history. Examining the beginnings of the modern debate at the end of the eighteenth century right up to the current global discussion, this book draws on a vast array of original historical sources and serves as both an in-depth study of, and introduction to, Basic Income and its history.

Summaries in English of some documents in Chinese

During the Summer of 2021 four Chinese students volunteered with BIEN, and one of the tasks that they fulfilled was to write summaries in English of a number of relevant documents in Chinese.