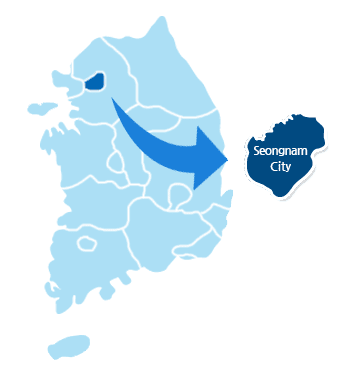 SEONGNAM, KOREA: A city with nearly a million population considering for a ‘Youth Dividend’

Seongnam city is considering implementing a ‘Youth Dividend’, based on the idea of a basic income. If it happens, it will be the first case in Korea.

The city（성남시 城南市）is located about 20 km south from the centre of Seoul, and has a population of around 980,000 in its 142 square kilometers of land.

The mayor, Lee Jae-myeong (이재명) has been keen for poverty reduction. With his initiative, the city considers an introduction of a ‘Youth Dividend’. Although the idea is inspired by a universal and unconditional basic income, the detail of a ‘Youth Dividend’ is not decided yet. The city commissioned to an external agency for research on feasibility of implementation of it last June.

The image of map is from https://www.seongnam.go.kr/EN/

Basic Income Generation is the product of a process started in late 2012 by two Korean Basic Income activists, Juon Kim and Kieun Song, who first proposed that a Basic Income Global Youth Network (BIGYN). After a few exchange of emails and a Skype meeting, it was decided that activists would gather up all the young people present at the next BIEN General Assembly to ask them what they thought of the idea and how to move it forward. The group thus organized two informal gatherings in Montreal, which led the group to turn into Basic Income Generation (on a proposal from Stanislas Jourdan), on the Swiss model of ‘Generation Basic Income’ that was created to support their national citizen initiative, and lead it to succeed.

More information about Basic Income Generation (including information on how to get involved) is on its Facebook page:  https://www.facebook.com/groups/248926788642187/

Information about the conference (in Korean) is online at this website.

Third, Kwen Moon Seok, a beloved steering committee member of the Basic Income Korean Network (BIKN), passed away in May 2013. He was only in his mid 30s and left his wife and an infant daughter behind. Before his death, he had devoted himself to setting up an new network called, “alba-yondae (Solidarity of tentative workers)” and had been respected by many young people who joined the network. According to a member of BIKN, “He was one of the most sincere and hard working activist. … May rest in peace.”

Popho E. S. Bark-Yi, “The System of Sexuality and Basic Income”
ABSTRACT: This paper suggests that the ideological idea that equates women to sexual objects, not to sexual subjects, is still pervasive in South Korean culture. The author argues that this idea puts women in an inferior position to men in social, economic, and political spheres. Arguing for this idea’s deconstruction, the author introduces the term ‘system of sexuality’. This highlights the key feature of the current system, in which relationships between women and men are deeply intertwined with and sustained by sexuality, economics and politics. Basic income implies unconditional cash payment to every individual regardless of gender, age, marital status, employment status or wealth. Negotiation power in relationships partially but significantly depends on one’s degree of economic independence. Women’s economic status, nevertheless, has been heavily weakened due to the heterosexual male-oriented economic system as well as the marriage system. Basic income which guarantees each and every woman a certain level of income will offer a meaningful contribution to enhance women’s negotiation power within the current system of sexuality.