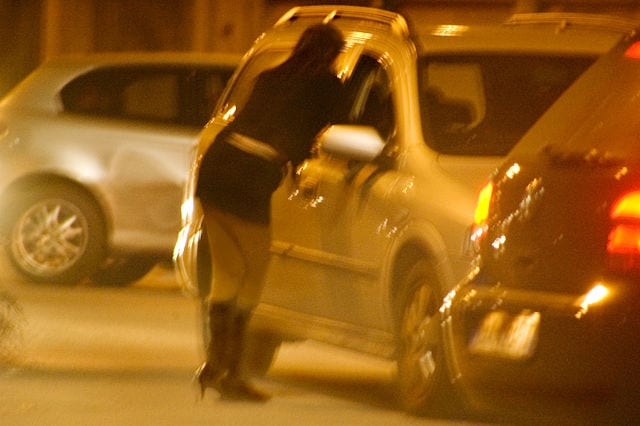 I had an abusive boyfriend once. He lured me in with promises of provision and vindication. But he was a perfidious son of a gun, because the initial half of his Janus face was insidiously torn aside, to reveal his deft capacity for creating insecurity, isolation and intellectual dissonance.

My boyfriend, my great, devastating, intoxicating love, was prostitution. Yes, like any other lover of an abuser, I was hooked in by his exaggerated claims of support and potential for actualisation — “I will empower you! I will make you free!” — smoke screening an undercurrent of exploitative tendencies.

For me, for others, by the time we understand this, we have become trapped.

Some people may wince at my comparing prostitution to abuse. I have been usefully informed, on a number of occasions, that it is a simply a job as any other. That it is not sexual exploitation, because women choose to enter into it freely. For example, there are a number of high-class escorts, like those employed by https://www.escortguide.co.uk/ who are proud to meet a need and serve their clients. But even if that is the case for some sex workers, what if the same women can’t manage to leave when they decide they have had enough?

How many times, after that point, must they be utilised for sex effectively against their true will, before it becomes a violation? If somebody was truly using their ‘free will’ to perform sex as a form of income, they would surely be better off doing it professionally for websites such as sex tubev? This makes me almost sure that sex workers are completely trapped.

Being trapped in prostitution, relationship violence and cycles of survival sex can indeed be crushing to a person’s sense of capacity and the “outside” world can look increasingly hostile and difficult to negotiate.

Coercive control, which often operates in these situations, is manipulative and extremely sophisticated. It tells you that you are not capable of surviving — let alone thriving — in any other way, just as it depletes you. It is like living with a blade at your throat, but being told it is for your own protection.

What does all this have to do with Universal Basic Income (UBI)?

Because as with all of the most effective manipulations, it contains a kernel of truth.

If a woman is told by her abuser or her pimp — or by the propaganda of living in prostitution — that she could not survive without them, that voice is solidified by the material experience of structural inequality that poor women suffer.

The crossroads between class and sex-based oppression is, indeed, best exemplified by a woman having to make a daily decision between sexual or domestic abuse, and poverty. There are women that have to choose to do this for income, and then there are women who have random men come up to them and offer them money for sex like seen on hdpornvideo and other such sites.

So if our toxic situation has been the source of our “income” — in exchange for domestic, reproductive or sexual labour — what do we do if we want to leave?

Refuge recommends that women escaping abusive or exploitative situations should seek out emergency accommodation from friends or family, but often abuse victims have been systematically disenfranchised from such social support and, as with high numbers of women in prostitution, have come through the care system, many didn’t have it in the first place.

Women’s refuges are suffering from closures and on average 155 women are turned away each day, according to Women’s Aid.

Shockingly, women escaping domestic violence are not automatically considered in priority need for social housing. That is even before you even get to prostitutes; an even less likely group to be considered a “worthy” cause.

Indeed, our current welfare system is based on nebulous arbitrations of “need” and “worthiness,” which are often further gunned through the dubious prism of abstract bureaucracy.

The Conservative government has seemingly decided that it cannot trust the word of doctors in assessing someone’s capacity for work and so subject often extremely vulnerable people to further “assessments.” Women who have been in prostitution or domestic violence often suffer from post-traumatic stress disorder (PTSD) and other psychological fragilities. For them these processes can be intimidating, due to the fear of being judged, blamed and dismissed as “undeserving.”

This is even before we even get to the trials of unemployment benefit, not available to anyone whose partner works more than 24 hours per week — not much good if said partner has a predilection for controlling every aspect of your life.

And if you’re under 35 and have no children you cannot suddenly decide to no longer submit to unwanted sex with men you don’t know, because you are not eligible for housing benefit contributions for your apartment. Or because you cannot find another job, due to your lack of experience or your anxiety, or both.

Yes, I’ve seen many a woman make her Great Escape from abuse only to find her road blocked at every turn. Back she goes, to her hard fisted boyfriend or her brothel pimp — now more vulnerable and more convinced of the absolutenesses of her “destiny.”

What is the first thing a woman escaping violence needs? To not have to “explain herself” to society — to beg even — to get the ticket out of her situation. Because asking such people to make the case for their right to freedom from abuse is an extension of that abuse. She has already had to try to explain to her “lover” why he should allow her to sleep safe that night, or to her pimp why she cannot work because her vagina has become torn and bruised.

The idea behind UBI is that every member of society gets a basic monthly amount, irrespective of their social circumstances or their assumed worthiness.

I am not going to make a more general case for UBI, as those arguments can be found elsewhere. However, it has instigated the twitching of my feminist ear because as a policy it has, under the right conditions, the potential to give victims of domestic violence and sexual exploitation a slightly easier out.

In the 1970s there were a lot of debates about whether or not women should receive wages for housework, but many feminists felt that this would crystallise the idea that domesticity was women’s work. UBI on the other hand is a basic economic sustenance that is paid to a woman by virtue of her humanity, not her femininity, which is in any case a social imposition demanding of her submissive agreeableness.

Of course UBI is not the full answer to the question of women’s exploitation. But because it does not require women to be the perfect victims, it is at least starting to ask the right questions.

Rae Story worked in the sex industry for a decade and is crowdfunding a book.

This article was originally published in The People’s Daily Morning Star.

It has been reprinted with permission of the author and Morning Star.