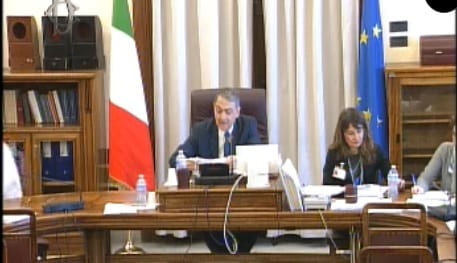 Founding members of BIN Italia attended the hearing of the Commission of Labour and Social Affairs of the Italian Parliament, on March 14, 2016.

The hearing had been requested to BIN Italy, regarding the examination of the draft 2016 Stability Law, which is about inequality, poverty, reorganization of social services and welfare system.

BIN Italia reminded the Commission of the importance of, and the reasons for, introducing a guaranteed income in Italy – one of the countries with the highest rate of risk of poverty and youth unemployment in Europe, and yet one that has not provided any universal income support scheme.

You can watch the video of the hearing here.

Saint Precarious (San Precario) is an iconic image created back in 2004 by a network of Italian activists who dealt with the concept of “precarity” since 2001. This unusual saint was declared patron of all precarious workers and used to recall Catholic saints believed to protect the faithful. This article not only explains the beginnings of San Precario movement and its early connections to international grassroots movements but also the reasons behind the failure of an international movement of precarious workers. For the introduction of a minimum income is one of the core battles for San Precario, the article also deals with this topic highlighting those campaigns which aim to such a measure both at national and European level.

A workshop entitled ‘Guaranteed Minimum Income and Fight Against Social Exclusion’ was organised on April 8th at Universita degli studi di Firenze. The workshop was lectured by Giuseppe Bronzini, Judge in the Supreme Court of Cassation in Italy, and coordinator of the scientific committee of BIN Italia. The event was part of a cycles of workshops organised by the Course of Labour Law of the University of Florence.

On April 8th the Association Progetto Diritti organised the presentation of both BIN Italia last book, Reddito minimo garantito, un progetto necessario e possibile [Guaranteed Minimum Income, a feasible and necessary project] (published by Edizioni Gruppo Abele) and the campaign ‘#Just Approve it!’ launched by the associations involved in the campaign for a popular initiative bill on guaranteed minimum income. During the event they screened the video ‘Reinventing the Welfare State: a European perspective’ by Francesca Bria and Sandro Gobetti.

On April 13th a public meeting on Common Goods and the so-called Commissione Rodotà (a parliamentary commission established in 2007 to change the rules of the Italian civil code on the subject of public goods and chaired by Stefano Rodotà, Professor Emeritus of Civil Law) was held at Teatro Valle Occupato. The meeting is an important step to form a coalition of scholars, jurists, and activist aiming at protecting the commons against neoliberal governance. Basic income has been listed as a common good along with the access to water, culture and nature.

More info (in Italian) is available on line at: https://www.teatrovalleoccupato.it/linarrestabile-ascesa-dei-beni-comuni-assemblea-pubblica-sabato-13-aprile-ore-15-30