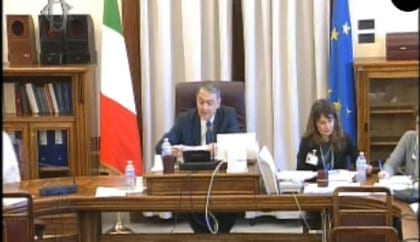 Founding members of BIN Italia attended the hearing of the Commission of Labour and Social Affairs of the Italian Parliament, on March 14, 2016.

The hearing had been requested to BIN Italy, regarding the examination of the draft 2016 Stability Law, which is about inequality, poverty, reorganization of social services and welfare system.

BIN Italia reminded the Commission of the importance of, and the reasons for, introducing a guaranteed income in Italy – one of the countries with the highest rate of risk of poverty and youth unemployment in Europe, and yet one that has not provided any universal income support scheme.

You can watch the video of the hearing here.

One comment Europe, Italian parliament, Italy
The views expressed in this Op-Ed piece are solely those of the author and do not necessarily represent the view of Basic Income News or BIEN. BIEN and Basic Income News do not endorse any particular policy, but Basic Income News welcomes discussion from all points of view in its Op-Ed section.