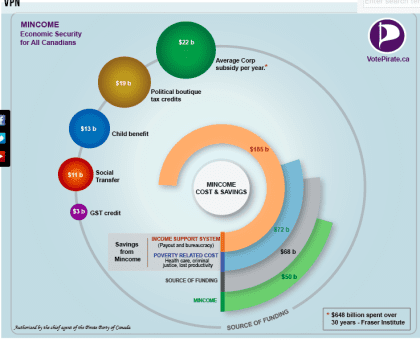 The Pirate Party of Canada has explicitly made a basic income guarantee one of four key components of their platform. As a national election is upcoming, the party has publicized several of their key issues and has made both a video and an infographic describing the benefits of a basic income in Canada and how it is attainable without raising taxes.

For more information on their platform and the benefits of basic income in Canada, see: their video here and their infographic here. You can learn more about the Pirate Party on their website at https://www.pirateparty.ca/

Carl Benedikt Frey, “How to Prevent the End of Economic Growth” 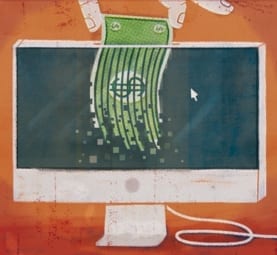 SUMMARY: Carl Benedikt Frey has written extensively about job loss due to technological advances. He finishes this piece by concluding that we need to create an environment that encourages more entrepreneurial risk taking: and that a basic income would help by softening the economic blow of failure while boosting spending and combating inequality.

Basic Income Action is a recently formed nonprofit organization with chapters across the United States whose mission is to win a basic income for all by educating and organizing people to take action. This group is a project of the National Institute for Science, Law, and Public Policy (NISLAPP).

This represents a key advance for those interested in basic income in the US as there are no other advocacy groups like this that are solely focused on advocating for basic income.

They encourage three specific actions from their supporters:

There is a local group of Basic Income supporters in New York City that has recently launched (with their first meeting on May 20, 2015) and is searching for new members. This group has created several channels through which supporters can get involved and is currently focusing on the prospect of a political movement for basic income in NYC.

Or reach out to them through twitter or email 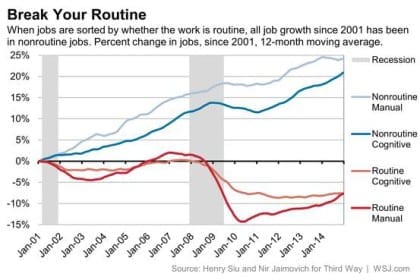 New research referenced in a Wall Street Journal article shows just how much the world of routine work has collapsed, citing that over the course of the last two recessions and recoveries (since 2001), the economy’s job growth has come entirely from non-routine work. This comes at a time when an increasing number of scholars, politicians, and citizens are talking about basic income as a solution to what some see as an inevitable job loss from technological advancement. Sources note that we no longer need to all humans to work, as we once did, for everyone to live comfortably and that we need to adjust our expectations and values accordingly.

Scott Santens, “Yes, it really is different this time and humans need not apply” scottsantens.com, January 15, 2015.

Alan Watts, “Money, Guilt, and the Machine” via ScottSantens.com.No date.