International: Rutger Bregman: He is saying out loud what the majority of people is thinking 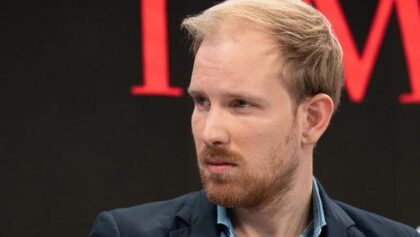 Rutger Bregman has been hitting the numbers the past few weeks. After a controversial participation at Davos, at the end of January, he went on for a controversial interview on Fox News that never got aired – but got “aired” on Twitter, and watched by more than eleven thousand people, and retwitted over sixty thousand times – and is, most probably, getting the spotlight out of a simple fact: he’s saying out loud what most people are thinking.

At Davos, on a shared panel, Bregman decided to touch the open wound, a particularly sensitive issue for all the millionaires and billionaires that fly over to this global elite event once every year: taxes. According to him, no private philanthropy can solve the real issue of tax avoidance, and that high taxes on the wealthy are an urgency in these troubled days (as well as terminating with tax havens). And he is not alone on this quest: most Americans support this general trend in tax policy – higher marginal tax rates, wealth taxes, inherence taxes and so on – and, if that’s the situation in the USA, then most possibly in the rest of the world that tendency is also real.

As an example, also cited by Bregman, Alexandria Ocasio-Cortez has been pushing for taxes on the wealthy as high as 70%. He adds that this is no coincidence, but a part of what he sees as an uprising on a “new generation waking up”. He believes this generation, in which he includes himself (a young 30 years-old Dutch historian), simply doesn’t believe anymore that inequality is some kind of fatality, and that (ordinary) people just have to deal with it. Bregman also voiced at Davos’s shared panel what he called “a moral equivalent of a war”, particularly when in reference to inequality (and also on environmental protection). Although imbued of a strong potency, it remains to be seen if warfare – real or a moral equivalent of it – has actually brought anything else to the world than heartbreak, death and destruction.

On Fox News, Bregman was interviewed by Tucker Carlson, a prominent Fox News anchor who, somehow, felt the need to affront him with harsh words. Apparently, the reason for that was Bregman’s boldness in saying that (about Carlson) “You are a millionaire, funded by billionaires, that’s what you are (…) and that’s why you’re not talking about certain things”. One of those things being, in particular, tax avoidance. Naturally, this word exchange didn’t come to any meaningful conclusion, but it may just be that Bregman went over to Fox News to speak for millions of people, who already suspect the collusion between big money and big media.

An edited eight-minute segment of the famous never aired interview can be watched over the link below (from Now This).

Watch Fox News host Tucker Carlson call one of his guests a 'tiny brain…moron' during an interview. NowThis has obtained the full segment with historian Rutger Bregman that Fox News is refusing to air. pic.twitter.com/kERYPUaGLY

Patrick King, “He took down the elite at Davos. Then he came for Fox News”, The New York Times, March 1st 2019

One comment Fox News, Inequality, taxes
The views expressed in this Op-Ed piece are solely those of the author and do not necessarily represent the view of Basic Income News or BIEN. BIEN and Basic Income News do not endorse any particular policy, but Basic Income News welcomes discussion from all points of view in its Op-Ed section.