Philippe Van Parijs lectures on “Basic Income: A Radical Proposal for a Free Society and a Sane Economy” 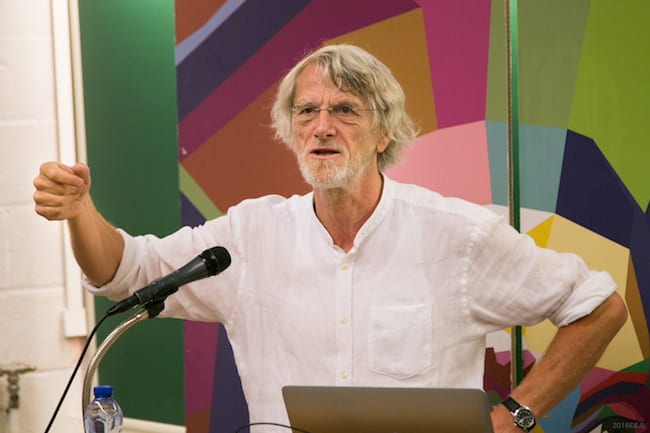 Basic Income: A Radical Proposal for a Free Society and a Sane Economy, a comprehensive book by BIEN’s Philippe Van Parijs and Yannick Vanderborght, was published last month on Harvard University Press.

In honor of the launch of the book, Van Parijs has delivered several public lectures, beginning with events in Copenhagen, Denmark (March 28) and Stockholm, Sweden (March 30).

The former was part of a workshop on basic income organized by the Department of Political Science at the University of Copenhagen in conjunction with two political parties, the Alternative and the Social Liberal Party, and held at the Danish Parliament, Christiansborg.

In his talk, Van Parijs describes the origins of his own support for basic income and his discovery of previous supporters of the idea. He goes on to discuss the current popularity of the idea, examining three events that have popularized basic income within the past year: the Swiss basic income referendum, the decision of the Finnish government to conduct a basic income pilot study, and the election of president candidate Benoît Hamon in France’s Socialist primary.

Van Parijs’s lecture was followed by two additional presentations on the topic — a critical perspective from Otto Brøns-Petersen of the think tank CEPOS, and a sympathetic one from Torsten Gejl of the Alternative, who relates that the party is beginning to investigate a model for a feasible basic income for Denmark.

The second launch event was a seminar at Stockholm University, moderated by Institute for Future Studies Director Gustaf Arrhenius.

In this lecture, Van Parijs considers basic income from the standpoint of philosophical ethics and social justice, addressing the common objection that it is unjust to provide money to individuals without requiring some type of work or contribution. In countering the “freeloader” objection, Van Parijs begins with what he calls “ad hominem” replies — accusing the objectors of applying inconsistent principles. He proceeds to provide a positive account to justify the provision of a basic income without requiring anything in return, viewing it instead as a social inheritance. According to Van Parijs, most of the wealth in society cannot be ascribed to the contributions of any particular individuals, and is best conceived as rightfully belonging to all of us collectively. At the same time, he stresses that we still need an “ethos of contribution”, which is compatible with the provision of an unconditional basic income.

Robeyns praises Basic Income, especially for its balanced and sympathetic treatment of critical views. Her comments provide a general critique of the discourse surrounding basic income, arguing that one cannot be “for” or “against” a basic income outright without specifying amount, funding source, and what other programs would be replaced.

Bergh also praises the book, calling it “convincing”, although he too has complaints with the current state of basic income discourse–beginning with the book’s subtitle. According to Bergh, basic income is not a “radical” proposal and, moreover, calling it such is unhelpful with respect to its political popularity. Bergh urges basic income advocates to “get their hands dirty with national politics”.

After the European book launch events, Van Parijs traveled to the United States for additional public lectures. These included a talk at Bowling Green State University in Ohio on April 7, where he was one of three keynote speakers (along with Evelyn Forget and Matt Zwolinski) at the university’s annual Political Theory Workshop–which, for 2017, focused on basic income and the future of work. On April 12, Van Parijs spoke at Stanford University, as the second major event hosted by the university’s newly founded Basic Income Lab.