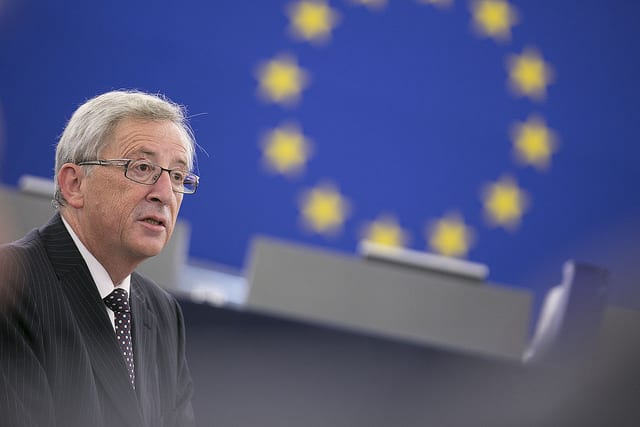 Some commentators have inaccurately claimed that EU leader Jean-Claude Juncker recommended basic income during a speech earlier in the year.

In January 2017, Jean-Claude Juncker, President of the European Commission (the Executive Branch of European Union), addressed a European conference on the Pillar of Social Rights. He advised EU member states to adopt minimum salaries and wages, stating, “There should be a minimum salary in each country of the European Union” and adding (according to a report in Reuters) that those seeking work should also have a guaranteed minimum level of income.

Basic Income News did not initially cover the story, as it is not directly relevant to basic income. Since this time, however, Juncker has been occasionally misreported as having advised members states to adopt a basic income. In fact, he said no such thing at the Pillar of Social Rights conference, where he merely called for minimum salaries to workers and unemployed job-seekers throughout the EU. Generally speaking, moreover, Juncker has not been known as an advocate of basic income, despite earlier statements suggesting that he might support the idea.

“While harmonised minimum income and minimum wage levels throughout Europe would be an improvement, this has nothing to do with moving towards a basic income.”

One of our proposals – that a ‘Eurodividend’ be paid to every EU citizen – would be a far more ambitious and transformative option where the EU could take the lead rather than waiting for the Member States to act. This would truly help support EU citizens through times of crisis, help balance income distribution throughout the EU and mitigate forced migration through lack of jobs and/or income. It could help those countries most affected by the economic crisis get back on their feet by making it possible for their youth to stay.

“Given the urgency of the economic and political situation, and the widening discussions of basic income both inside the European Parliament and its committees, we urge the European Commission to follow the lead of its Employment and Social Affairs Commissioner Marianne Thyssen. She has already pointed out the necessity of discussing basic income when thinking about future transformation of our social systems.

“Further laws and directives around minimum income and wages will have little effect on those countries already forced to cut their social security budgets under austerity measures. The EU should lead the way in providing some form of income security for all of its citizens if it wants to stem the rising tide of nationalism throughout Europe.”

On February 16, the European Parliament voted on a series of policy recommendations for the European Commission concerning the future of work. The Parliament rejected a proposal to recommend that “a general basic income should be seriously considered” to address the economic impact of automation and artificial intelligence.