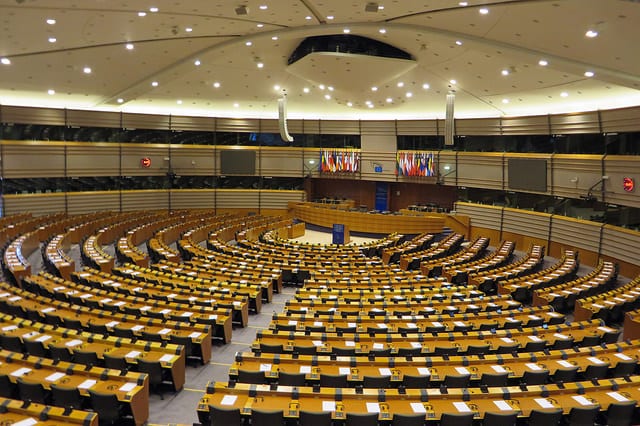 In a February 2017 vote on recommendations to address the effects of automation, the European Parliament rejected a proposal to recommend consideration of basic income.

As previously reported in Basic Income News, the Committee on Legal Affairs of the European Parliament prepared a draft report with recommendations concerning the regulation of artificial intelligence and robotics as well as their economic and societal effects.

Among numerous other recommendations to the European Commission, the draft stated that “in the light of the possible effects on the labour market of robotics and AI a general basic income should be seriously considered” and that it invited all Member States of the European Union to do so. Maddy Delvaux, the Socialist Member of the European Parliament (MEP) from Luxembourg who authored the report, has stated that she personally supports a universal basic income. The report, however, merely proposed to raise the idea for consideration without endorsing it.

The European Parliament voted on the Committee on Legal Affairs’ report on February 16, 2017. This vote determined the recommendations that would be delivered to the European Commission with respect to technology policy.

Daniel Feher, Vice-Chair of Unconditional Basic Income Europe (UBIE), was disappointed by the result, but sees a silver lining:

It’s a shame that the conservative and liberal parties seem to be afraid of an open-minded debate on basic income. On the positive side, we’re thankful MEP Mady Delvaux raised the issue, and provoked the first serious discussion of basic income at the European Parliament. The EP’s Legal Affairs Committee, in charge of this report, also supported universal basic income in the draft text. Since the vote was taken by roll call, we know who supported the proposal, and this gives us a much stronger basis for lobbying in the future. We will keep pushing the basic income debate for sure!

Other controversial recommendations put up for consideration included a tax on work performed by robots, which was also voted down (302 to 288, with 22 abstentions).

According to EurActiv.com, “A majority of MEPs preferred to focus at this stage on the issue of liability, one of the main elements included in the report, instead of discussing the introduction of controversial taxes. Instead of the universal basic income, legislators spoke in favour of support programmes to facilitate the transition to new jobs.”