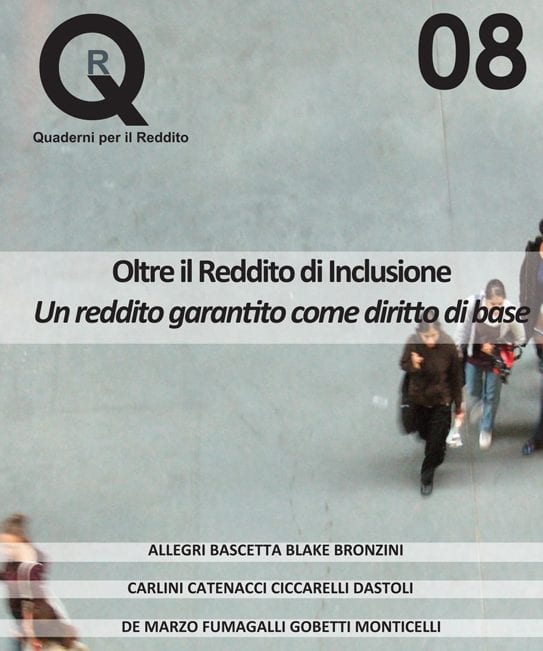 New book: Beyond the Income for Inclusion, for a guaranteed Income as a Basic Right. 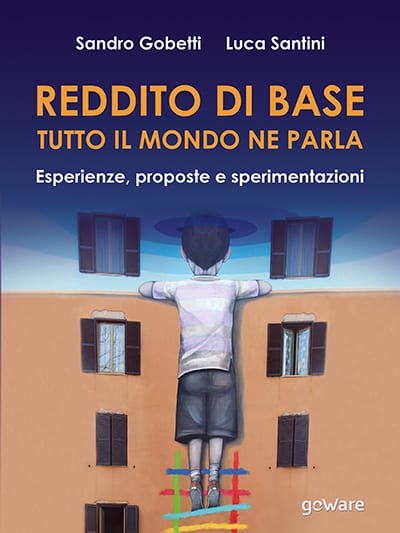 Basic income, the whole world talks about it. Experiences, proposals and experiments this is the title of a new book by Sandro Gobetti and Luca Santini, with a preface by Andrea Fumagalli, published by GoWare Edizioni (March 2018).
Description
At the dawn of a new great transformation with the advent of the technological revolution, robotics and artificial intelligence, and in the age of major crises (economic, financial, political and ecologic), comes the echo of a proposal that opens unpublished scenarios: a basic income for all. In the era of the capitalism as a unique economic model, the idea of ​​ a guaranteed income rises up as one of the main human rights.
From experiences of minimum income inEuropean countries to the experimentation of an unconditional basic income around the planet, the right to a guaranteed income becomes key to fully enter, with confidence, in the third millennium. A book of agile and quick reading, written by two major Italian experts, helps to understand where we are and what we can expect.
Summary
Preface by Andrea Fumagalli
Introduction
Guaranteed minimum income and basic income
universal
Protection against social risks and minimum income: from welfare state to guarantee income
Unemployment insurance and minimum income in Europe
Systems and models of protection in European countries
What this means in practice: some examples
The universal and unconditional basic income
People talk about it everywhere. The state of the art of experimentation in the world
Africa at the forefront
What happens in Latin America
Back in the “first world”: North America
Asia, a crossroads of experimentation
The old continent that wants to reinvent itself
The debate and the proposals in Italy
Without income, without a network
A categorial and fragmented welfare
Moving situation
Essential principles for a possible proposal
Relations with unemployment benefits
Beneficiaries’ platform
The question of accessibility
Basic Income amount
Connection with the service system
Individuality
Basic Income duration
The principle of congruence
To find out more: bibliographic references for topics
European models of guaranteed minimum income
Social and labor transformations and basic income
The fourth industrial revolution, artificial intelligence, robotics and basic income
Authors
Sandro Gobetti, independent researcher and author of articles with a particular enphasis on guaranteed income. He collaborated on the 4/2009 law definition about minimum guaranteed income in the Lazio Region, and the national proposal law for guaranteed income. He is a founding member and coordinator of the Basic Income Network-Italy.
Luca Santini, lawyer, expert on migration law and social security law and has signed several articles. Has collaborated on the proposed law for guaranteed minimum income in Italy. He is the president and founder of the Basic Income Network-Italy.
Sandro Gobetti, Luca Santini, “Reddito di base – Tutto il mondo ne parla [Basic income – the whole world talks about it]“, Goware, 2018 (in Italian)
This article has been reviewed by André Coelho 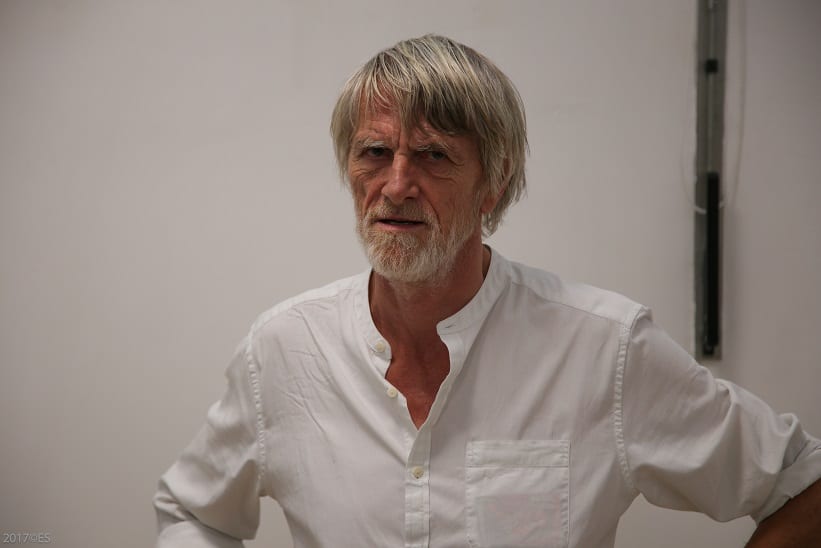 Phillipe van Parijs has delivered the 2017 annual Il Mulino lecture, which happened on Saturday, the 28th of October, at the Bologna University’s Aula Magna. This major event, attended by around 900 people, had the presence of former Prime Minister and European Commission president Romano Prodi, ex-minister Vincenzo Visco, the president of the Italian Central Bank and the Archbishop of Bologna, among other Italian political public figures.

The lecture was titled “Il reddito di base: tramonto della società del lavoro?” [“Basic income: sunset of the work society?”], and coincided with the publication of van Parijs and Yannick Vanderborght latest book “Basic Income: a radical proposal”, published in Italian under the title “Il reddito di base: una proposta radicale” (an edition by Il Mulino).

The event got massive coverage by the Italian media, including Corriere di Bologna, La Republica Bologna, La Nazione, the LEFT magazine, plus several radio stations and the national Italian TV (RAI). However, according to Sandro Gobetti, from BIN Italia (Basic Income Network Italy), Italian media tended not to grasp the main news message in this event. Gobetti argued in his article that it was not so much that political figures Visco and Prodi met and hugged, but that they had, in fact, attended a lesson on basic income by a prominent thinker in the field, Phillipe van Parijs. The relevance then, is not so much in knowing if these politicians agree or not with the basic income concept (they expressed many reservations), but recognizing this as a real issue, growing everyday as an international debate.

ITALY: 1000 squares for the “income of dignity”

Many associations, collectives, social movements, students and activists have joined the “Rete dei Numeri Pari” (Even Numbers Network – to which BIN Italia (Italian Basic Income Network) is also a part of), promoting a social campaign for the “income of dignity”. There will be 1000 squares across the country hosting public initiatives, debates and meetings where people will talk about the income of dignity proposal (a sort of guaranteed minimum income).

From the appeal: 1000 squares for the income of dignity
“Poverty, precariousness and inequalities are the reality of social suffering of millions of people in Europe and Italy, who pay the burden of a crisis they did not produce. All these people try to evade blame and responsibility, but we have not forgotten that it is the result of precise political and social choices. […] Over the years, we have witnessed the collapse of social policies: cuts in health, public transport, and social cooperation. We witnessed the rising cost of education and saw the right to study disappear from government agendas. Working conditions have worsened: the generations are divided between those who struggle to find a job and those who work in unacceptable conditions. This is evidenced by statistics on poverty, which now affects one Italian on three, while five million people are in absolute poverty.

We cannot wait anymore. […] Against growing social inequalities, it is necessary to affirm a new idea of ​​society and solidarity.

It is necessary to break the chains of solitude imposed by this economic system. We must guarantee the fundamental right to a life worth living. The introduction of a guaranteed minimum income and the provision of quality and universal public services are the bases for a new system of social welfare and social security to protect people from poverty, mafia and work without rights. […] Despite the mobilization of so many, many of whom have in the last few years created a proposal for “guaranteed minimum income”, the government has instead chosen to promote “Inclusion Income”, a totally unsatisfactory proposal for the number of beneficiaries and resources invested, which does not even respond to the needs of a third of the population in relative poverty. […] Government and parliamentary measures have introduced an unconstitutional form of “selective universalism” […]

From the 16th of June, the “Rete dei Numeri Pari” will be in the squares […] We will act alongside women who want to get rid of a model of patriarchal and masked society. We will act alongside migrants to build together the right to a true and friendly citizenship. We will be in the streets with students for free education. We will mobilize with the impoverished labor force: employees, intermittent, precarious, and all workers who suffer due to the burden of the labor policies of these recent years.

We will be in over one thousand squares to say that an alternative society is emerging from the bottom and that we must mobilize together.” 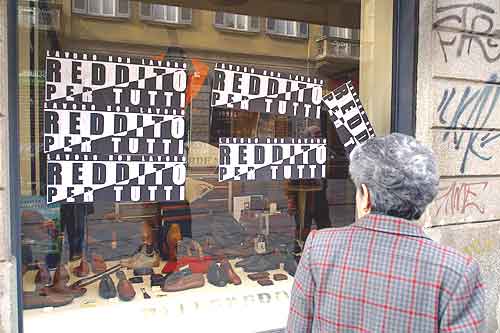 From the 23rd to 24th of June 2017, the National Meeting of the CLAP – Chambers of Autonomous and Precarious Worker – will be held in Rome. Two days of meetings and debates will be held, over issues of labor transformation, social and innovative syndicalism, new social protection policies and basic income.

On June 24th, at 5 pm, a round table will be held, titled “Basic income: an inevitable proposition to counteract the crisis and to really change”. The Basic Income Network Italy (BIN Italia) will be present and talk at this meeting.

The meeting will be held at ESC Atelier Autogestito, in Via dei Volsci 159, Rome.