Basic Income: A Radical Proposal for a Free Society and a Sane Economy, by Philippe Van Parijs and Yannick Vanderborght

BIEN co-founder Philippe van Parijs and his former student and recurring coauthor Yannick Vanderborght have coauthored a major new work: Basic Income: A Radical Proposal for a Free Society and a Sane Economy, published in March 2017 by Harvard University Press. 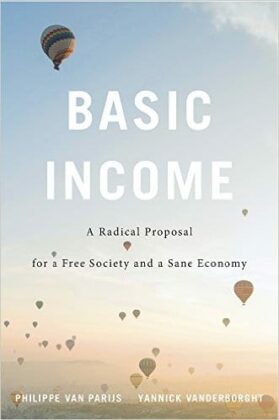 In the book, van Parijs and Vanderborght present a thorough history of basic income as well as a philosophical and practical defense. In the first chapter, they elaborate upon the concept of a basic income (“a regular income paid in cash to every individual member of a society, irrespective of income from other sources and with no strings attached”), explaining the significance of each of the key characteristics: it is paid in cash (rather than in kind), paid to individuals (rather than to households), universal, and obligation-free. In the second chapter they proceed to contrast basic income with alternative (but often closely related) proposals — such as the negative income tax (which is sometimes conflated with basic income), basic endowment, Earned Income Tax Credit, job guarantee, and working-time reduction.

In the following two chapters, van Parijs and Vanderborght turn to the history of the idea of basic income, beginning in the sixteenth century with the writings of Thomas More and his fellow humanist Juan Luis Vives, then progressing alongside policy developments from England’s Poor Laws to the Speenhamland system to Bismarck’s social insurance to contemporary welfare states. The fourth chapter delves in more detail into the intellectual history of the idea, starting from Thomas Paine’s seminal proposal in Agrarian Justice and the competing proposal of his contemporary Thomas Spence. Van Parijs and Vanderborght relate the ideas of subsequent thinkers — including J.S. Mill, Bertrand Russell, George D.H. Cole (who coined the term ‘basic income’) — in their historical context. The authors describe the varied strands of support for minimum income proposals in the United States during the 1960s and early 1970s, briefly review the creation of Alaska’s Permanent Fund Dividend, and overview the emergence of the European movement in the 1970s and 1980s, including the founding of BIEN.

After this history, the authors devote a series of chapters to analyzing and rebutting arguments against basic income — the ethically based “free riding objection” to the lack of a work requirement, the practical concern that a basic income could not be sustainably funded, and the worry that basic income is not politically feasible. Finally, they devote a chapter to the impact of globalization on the implementation of a basic income.

Basic Income has been featured as “Book of the week” by Times Higher Education, which published a review along with wide-ranging interviews with van Parijs and Vanderborght.

Nobel Laureate Amartya Sen has described the book as “essential reading for anyone interested in the problems of deprivation and unfreedom that survive even in the richest countries in the world” — calling it “powerful as well as highly engaging—a brilliant book.”