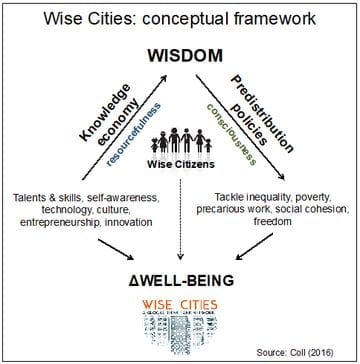 “Wise Cities & the Universal Basic Income: Facing the Challenges of Inequality, the 4th Industrial Revolution and the New Socioeconomic Paradigm” by Josep M. Coll, was published by the Barcelona Centre for International Affairs (CIDOB) in November 2017. CIDOB is an independent think tank in Barcelona; its primary focus is the research and analysis of international issues.

CIDOB has published other works about a concept it calls “Wise Cities,” a term intended to holistically encompass words like “green city” or “smart city” in popular usage. Wise Cities, as defined by CIDOB and others in the Wise Cities think tank network, are characterized by a joint focus on research and people, using new technologies to improve lives, and creating useful and trusting partnerships between citizens, government, academia, and the private sector.

The 2017 report by Coll opens with a discussion of the future of global economies; it highlights mechanization of labour, potential increases in unemployment, and financial inequality. It next points to cities as centres of both population and economic innovation and experimentation. A Wise City, the paper states, will be a hub of innovation that uses economic predistribution—where assets are equally distributed prior to government taxation and redistribution—to maximize quality of life for its citizens.

Universal Basic Income (UBI) is one example of a predistribution policy. After touching on UBI’s history and current popularity, Coll summarizes European projects in Finland, Utrecht, and Barcelona in order to highlight city-based predistribution experiments. Coll adds that while basic income is defined as unconditional cash payments, none of these pilots fit that definition: they all target participants who are currently, or were at some time, unemployed or low-income.

Finland’s project began in January 2017, and reduces the bureaucracy involved in social security services. It delivers an unconditional (in the sense of non-means-tested and non-work-tested after the program begins) income of 560 €/month for 2,000 randomly selected unemployed persons for two years. Eventual analysis will consist of a comparison with a larger control group of 175,000 people, and the pilot is a public initiative.

The city of Utrecht and Utrecht University designed an experiment which would also last two years, and would provide basic income of 980 €/month to participants already receiving social assistance. The evaluation would assess any change in job seeking, social activity, health and wellness, and an estimate of how much such a program would cost to implement in full. The author comments that the program was suspended by the Netherlands Ministry of Social Affairs, and the pilot is currently under negotiation.

Barcelona has begun an experiment with 1,000 adult participants in a particularly poor region of the city, who must have been social services recipients in the past. “B-Mincome” offers a graduated 400-500 €/month income depending on the household. After two years, the pilot will be assessed by examining labour market reintegration, including self-employment and education, as well as food security, health, wellbeing, social networks, and community participation. Because the income is household-based, and not paid equally to each individual, it is not a Basic Income, but the results could still provide useful evidence for the possible effects of a future Basic Income.

Coll identifies several key takeaways from a comparison of these projects. None of the experiments assess the potential behavioural change in rich or middle class basic income recipients. In addition, multi-level governance may cause problems for basic income pilots, but these issues may be mitigated as more evidence assessing the effectiveness of UBI builds from city-driven programs. Coll also acknowledges that all of the experiments listed in his paper are from affluent regions.

In conclusion, the author argues that UBI is a necessary step to alleviate economic inequality. While cities are experimenting with the best ways to implement UBI, they are often not real UBI trials (as they are not universal), and they do not always take an individual-based approach; however, they are nevertheless useful components of the Wise City model. 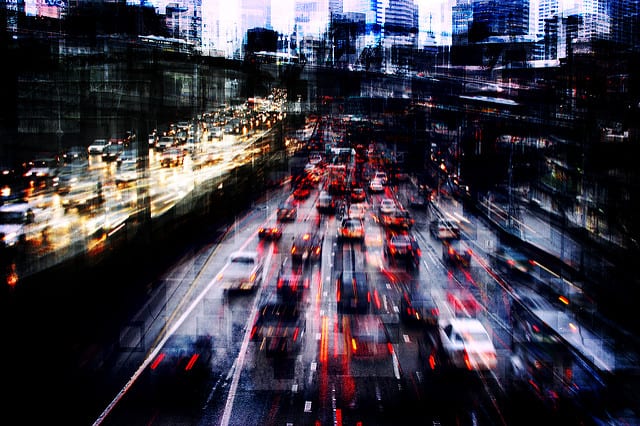 The National League of Cities (NLC) — an advocacy organization representing 19,000 cities and towns in the United States — has published a report called The Future of Work in Cities, which briefly recommends that cities investigate universal basic income.

The Future of Work in Cities examines the changing nature of work, especially due to automation and the growth of the “gig” or “1099” economy, and the lays out several policy recommendations for cities to address these changes. One recommendation is that cities “explore basic income and other more broad-based social support systems.”

The NLC report describes basic income as “similar to US social security and welfare systems, with the major exception that the benefit goes to everyone, regardless of age, ability, class status, or participation in the workforce,” and provides a brief summary of a few arguments for and against such a universal and unconditional benefit:

Some individuals from the tech world tout basic income as a way to counteract the economic blow of automation replacing jobs currently occupied by humans. Other supporters argue that basic income is more streamlined, efficient, and transparent than currently administered social welfare systems. Finally, there are some individuals who endorse the idea of less work overall, arguing that a basic income might free up the time individuals spend working and allow them pursue other, more creative, and enjoyable pursuits. Many critiques of basic income systems center on how it will be sustainably funded or the cultural implications of instituting such a system (p. 48).

The authors mention taxation as a possible funding mechanism, but do not delve into any more detail.

Other strategies broached in the report include offering more portable benefits (e.g. health insurance that is not tied to an employer), increasing the minimum wage, ensuring that families have affordable childcare and paid leave, and easing the entry of individuals with criminal records into the workforce.

The Future of Work in Cities is the second report in NLC’s City of the Future series. The first report, City of the Future: Technology & Mobility, investigates ways in which new technologies will impact transportation systems in urban areas.