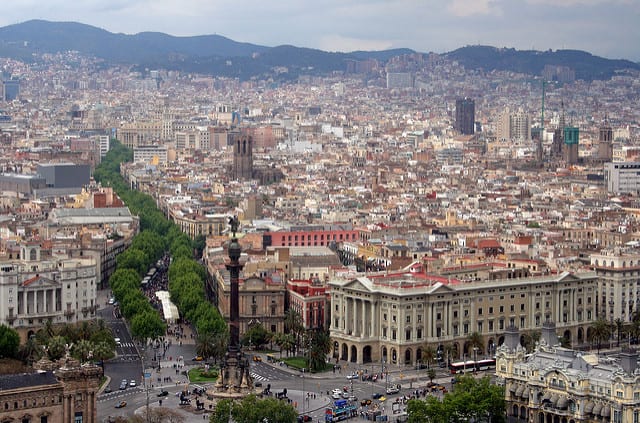 In October 2017, the city of Barcelona, Spain, will launch a two-year experiment testing several variants of a guaranteed income and active policies to reduce poverty rates.

The project has been called B-MINCOME in reference to the Canadian province of Manitoba’s Mincome experiment, a guaranteed annual income trial conducted in the late 1970s.

The design of B-MINCOME, which was first discussed in Basic Income News in February, has recently been finalized. It will be conducted in the Besòs area, the city’s poorest region, and include 2000 households. These households will comprise a stratified random sample from Besòs area households which have at least one member between ages 25 and 60 and which are current beneficiaries of the city’s Municipal Social Services. (Participation in the experiment is voluntary for the households selected, in contrast to Finland’s basic income experiment in which participation was made mandatory to avoid self-selection bias.)

Of the selected households, 1000 will be assigned to a control group, while the other 1000 will be assigned (at random) to one of ten treatment groups, all of which will receive cash income supplements (Municipal Inclusion Support or SMI). Treatment groups differ according to whether the SMI is accompanied by an additional program and whether the SMI is means tested.

The amount of the SMI will depend upon household composition and financial status, but will range from 100 to 1676 euros per month per household. For example, a four-member household with no assets and a total monthly income of 900 euros would receive an SMI of about 400 euros per month. Participants will continue to receive Municipal Social Services, but these will be deduced from the SMI.

For 450 households in the study, the SMI will be delivered without any additional associated policies. For this group, the benefit will carry no terms or conditions beyond those made necessary by the constraints of the experiment: participants must continue to reside in the Besòs area until the conclusion of the trial on September 30, 2019, and they must agree to the terms of the experiment (e.g. consent to be anonymously monitored for research purposes, communicate changes in income or household status to those administering the experiment, and install a mobile app to communicate with experimenters). Importantly, receipt of the SMI is not conditional on a willingness to work or fulfill any other participation requirement.

Thus, the latter treatment group will receive a benefit extremely similar to a basic income–a guaranteed monthly cash payment with no work requirement or means test–with the slight difference that its amount depends on household composition.

The remaining 550 households will not only receive the SMI but also be subject to an associated social policy. These households will be distributed among eight treatment groups, according to (a) the associated policy and, in the first three groups, (b) whether participation in the policy is mandatory or voluntary. The policies include (1) an occupation and education program (150 households), (2) a social and cooperative economy program (100 households), (3) a guaranteed housing program, and (4) a community participation program (200 households).

Within the fourth group, half of the households will be assigned to a treatment group in which the SMI is means tested, half to one in which it is not.

The researchers conducting B-MINCOME are interested in the extent to which the SMI reduces poverty and social exclusion, and which particular models of SMI are most effective for this purpose. For instance, is the SMI more effective when combined with any particular associated policy, or with none at all? And is the SMI more or less effective if it is means tested?

Researchers will additionally examine whether the SMI reduces the administrative and bureaucratic responsibilities of social workers.

B-MINCOME is supported by a grant from Urban Innovative Actions (UIA), an initiative of the European Commission that supports projects investigating “innovative and creative solutions” in urban areas. The Barcelona City Council partnered with five research organizations and institutions to design and conduct the experiment: the Young Foundation, the Institute of Governance and Public Policy at the Autonomous University of Barcelona, the Polytechnic University of Catalonia, the Catalan Institution for Evaluation of Public Policies, and NOVACT-International Institute for Non-Violent Action.

B-MINCOME has maintained connections to global basic income movements throughout its design phase. The designers of B-MINCOME consulted with representatives from the governments of Finland, the Canadian province of Ontario, and the Dutch municipality of Utrecht, who have been involved with the design of guaranteed income experiments in their own areas. In addition, the project team contains several members of BIEN’s Spanish affiliate, Red Renta Básica.

The leading political party in Barcelona’s City Council, the left-wing Barcelona en Comú, hopes to implement a municipal cash transfer program following the results of the B-MINCOME pilot, in part with the goal of reducing the bureaucracy associated with the administration of Municipal Social Services and reducing total expenditures on social policies.

Thanks to Bru Laín for details of the design of B-MINCOME, and Genevieve Shanahan for copyediting this article.