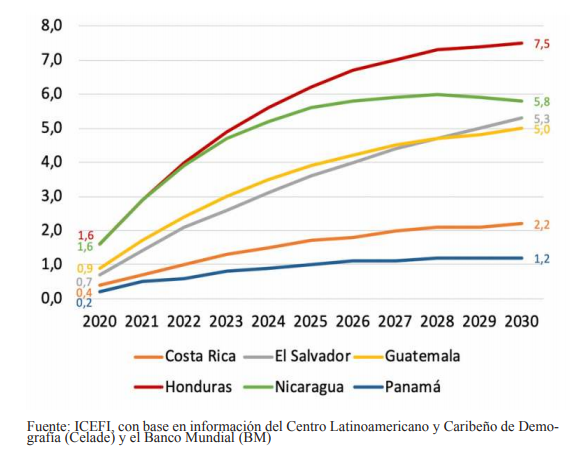 Recently, the Central American Institute for Fiscal Studies (Icefi) proposed for Central America the implementation of a universal basic income (UBI), seeking that the States of the isthmus have a minimum guarantee of social protection, while contributing to counteract the impact of the Covid-19 pandemic. A UBI, accompanied by other public, social and economic investments, would accelerate the fulfillment of the 2030 Agenda for Sustainable Development and, by proposing a change structural in the welfare and economic growth model, could be the basis for the discussion of new social, political, economic and prosecutors in Central America.

Central American governments have implemented actions in order to contain the spread of the virus and reduce the impacts on people’s health and economic activity. However, these states have faced a complex scenario, although to varying degrees in each country, as the pandemic has exacerbated structural problems mainly related to the lack of equity in access and care of public health systems, the weak health care system and social protection and the low capacity to generate formal employment and productive transformation, which has as a consequence lead to high levels of inequality and poverty. Indeed, prior to the crisis, 45 out of every 100 Central Americans (about 22.5 million people) lives in conditions of poverty; furthermore, 82 out of every 100 poor Central Americans lives in Guatemala, El Salvador, and Honduras.

According to estimates by the Institute, the current crisis could cause the loss of up to 1.9 million jobs, and induce a significant increase in general and extreme poverty. Especially in Guatemala, El Salvador and Honduras, the current crisis could add at least 4.9 million people to poverty, according to data from the Economic Commission for Latin America and the Caribbean (ECLAC), which would further erode the weak social fabric of these countries of the region (Economic Commission for Latin America and the Caribbean (ECLAC), 2020, “Latin America and the Caribbean in the face of the COVID-19 pandemic: economic and social effects”, Special Report COVID-19 No. 3). Among the main measures that have been implemented by most Central American governments to limit the impact on the population, in terms of ensuring income, food security and basic services, particularly for vulnerable groups, are: food delivery; the creation of new monetary transfers; suspension of payment for basic services (particularly water, power and telephone); and, the increase in the amount of previously existing monetary transfers. Likewise, different types of protection programs have been put in place for workers in the formal sector, among which are teleworking, paid absence from work, unemployment insurance, reduction of working hours, among others. Additionally, additional direct support has been provided to individuals and families, consisting of credit payment facilities, support for workers in the informal sector, among others.

Although the measures adopted by the governments of the region are limited and of a temporary nature, they indicate the urgent need to implement permanent actions, from a long-term perspective, that make it possible to guarantee the gradual reduction of poverty in the countries of the region until they are eliminated and the rights of the people by strengthening States through the universal provision of social protection that allows rebuilding the social fabric of those countries.

Faced with the above, the Icefi has urged the Central American States expand and strengthen their social protection systems in a way that protect the population, prioritizing traditionally excluded groups
and the most vulnerable, the economic and financial damages derived the crisis and accelerate the process of economic recovery. To achieve these objectives quickly and effectively, the Institute proposes the implementation launch of a universal basic income (UBI) that eliminates extreme poverty and significantly reduces general poverty. In its III Report Central American fiscal policy ―whose first chapters were published in July―, the Institute has calculated the costs and effects of the application of a universal basic income.

For the implementation of a UBI, the Icefi proposes to assign a sum monetary to each member of society, equivalent to the amount associated with the international threshold of extreme poverty (USD 1.90 per day in parity of 2011 purchasing power). From that account, you would also be paying the achievement of the 2030 Agenda of the Sustainable Development Goals (SDGs), in particular goals 1, 2, 3, 5, 8, 10, 12, and 16. The application of a UBI has an operational simplicity that pays to its rapid execution, avoiding creating more bureaucracy, opening paths to corruption and keeping beneficiaries in the trap of poverty. By being assigned unconditionally, it would allow not only to eradicate extreme poverty, decrease overall poverty, reduce inequality in income distribution, increase levels of economic activity and create the conditions for new jobs, but also the measure should provoke the modernization of fiscal policy and rebalancing necessary of responsibilities between citizens, companies and the government. From that account, when proposing a structural change in the welfare and economic growth model, UBI could be the basis for discussion of new social, political, economic and fiscal pacts in Central America.

The initial estimates made by the Institute suggest that the annual investment required for the implementation of a UBI ranges from 1.2% and 7.5% of GDP for the six countries of the region, Honduras being the country that would require more investment due to the size of its GDP and the
number of inhabitants of the country. Similarly, Nicaragua would require an investment of approximately
5.8% of GDP; while in Guatemala and El Salvador, investment necessary would reach between 5.0% and 5.3% of GDP, respectively. In contrast, the countries that would face the least fiscal pressure to implement this policy are Costa Rica and Panama, whose investment would be around 2.2% and 1.2% of GDP, respectively.

Figure 1: Central America: necessary increase in public spending by the central administration to implement a UBI from threshold poverty level (2020-2030, figures as percentages of GDP).

At the Institute’s discretion, the implementation of a UBI could be carried out
gradually, as shown in Figure 1 ―in a maximum period of ten years and serving the population in the territories with the highest poverty and less development, consistent with the achievement of the Sustainable Development Goals and with the necessary institutional, fiscal and economic restructuring that guarantees the effectiveness and sustainability of this policy over time. This way of gradually achieving the universality of basic income would allow States to advance comprehensively in the universalization of other public goods and services related to education, health, water and environmental sanitation, housing, among others.

According to estimates by the Institute, among the greatest impacts of executing this agenda, in addition to the elimination of extreme poverty, is the generation of 2.0 million direct jobs; the increase average of 20% in the rhythm of economic activity, mainly driven by domestic production; as well as improvements in the indicators of social welfare and equality. For the general fulfillment of the SDG2030 Agenda in the Central American region, the Institute has identified various probable sources of financing, among which the increase in tax collection stands out. As a result of the reduction of illicit capital flows, smuggling, evasion of taxes and fiscal privileges; as well as by the increase of some taxes that, additionally, could improve the
global progressiveness of the tax system. In some states, indebtedness can also be considered as a financing mechanism. Additionally, the Institute reiterates that, on the side of public spending, it is possible to generate spaces additional prosecutors through two channels: by eliminating the items that are not oriented towards development goals, so that resources can be reallocated to programs that have such an orientation; as well as by improving efficiency of those that can generate better results in economic and social terms.

Table 1: Fiscal Space on the Taxation Side

The gradual implementation of a universal basic income, together with the advancement of public investments that guarantee the fulfillment of development goals, and a comprehensive fiscal reform ―more income, public spending based on results, greater transparency and an effective fight against corruption – are the elements that will allow Central Americans to successfully face this health and economic crisis, expanding rights and rebalancing social responsibilities. For this reason, the Institute urges all of society – peasant movements and promoters of individual human rights, workers, businessmen, academia, political parties and governments in office – to promote an open and sensible national dialogue, with a vision of the future, that has as objective of transforming States through a social, economic and fiscal pact that changes current political and socioeconomic trends and sets Central America on the path of sustainable, inclusive and democratic development to which the great majority aspire.

In particular, the states of the countries of the region must advance in the strengthening of their social protection programs, a central element of policy that allows reducing existing inequalities, not only in terms of income, but also from an inclusive perspective in economic terms and social that promote social cohesion. Furthermore, for Icefi, reducing the exacerbation of the poverty conditions in which more than half of Central Americans live may be possible by universalizing access to social protection programs, since the current context has only accentuated the existing limitations in terms of of the economic and social model. A better Central America is possible to the extent that an inclusive development model is formulated and built in economic, social and environmental terms, so that a universal basic income ensures a minimum base of protection that is accompanied by policies that guarantee for all a quality education; access to timely, effective and efficient health services; have public services of economic and social infrastructure that favor social cohesion; and that all implemented policies are consistent with an environmentally friendly strategy.