Germany: Establishment of the Freiburg Institute for Basic Income Studies, at the University of Freiburg

The new Freiburg Institute for Basic Income Studies (FRIBIS) has been founded, at the University of Freiburg, on the 28th of October, 2019. A public event marked the date, at which the initiators and donors Beatrice and Götz W. Werner where represented by Beatrice Werner, who introduced FRIBIS.

This new institute gathers researchers from various faculties and basic income protagonists from civil society, NGOs and activists, working together in interdisciplinary topical groups to examine universal basic income (UBI) in all its facets. Their work aims to follow UBI projects and to contribute with research results for implementation strategies in public society and to support political decisions, as much as possible following the scientific method. Knowledge transfer from science meets the challenges of civil society, strengthening its opportunities.

Prof. Dr. Bernhard Neumärker, the head of the Götz Werner Chair of Economic Policy and Constitutional Economic Theory, is a founding director of the Competence Network FRIBIS, along with professors from the Institutes of Computer Science, Psychology, Ethnology, Educational Science and the Faculty of Theology (from the University of Freiburg). At the Götz Werner Chair, Enno Schmidt is in charge of public effectiveness, transfer and networking. This team’s aim, on heading the FRIBIS, is to take the Götz Werner Chair to another level.

For context, Götz Werner is the founder of the dm drogeriemarkt group, emplying approximately sixty thousand people today, and has been, in the last decades, one of the most important voices for UBI in Germany. Earlier this year, in May, the Götz Werner Professorship was established, backed by the University of Freiburg’s rector.

The FRIBIS network is already functioning, on a series of levels. This is being achieved by interdisciplinary teams, working on topics such as “VAT-financed basic income” (Helmo Pape; Friedrich Schneider), the “Psychology of the Basic Income” (cross-faculty research programme), “The management of UBI-NGO’s”, “Foreign Aid Basic Income” and UBI as strengthening the resilience of societies in Africa, against the sellout of the countries and their resources. Other projects, as the “Sanktionfree / HartzPlus” are being closely followed by project manager Helena Steinhaus and Prof. Dr. Rainer Wieland from the University of Wuppertal. Further national and international teams, cooperating with individuals, institutes and projects are in preparation. FRIBIS will also organize conferences and be represented at conferences. 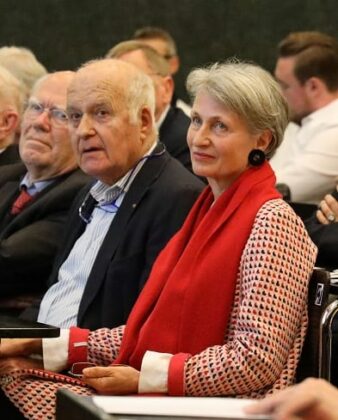 Further information or interest for membership can be sought by writing to Enno Schmidt (enno.schmidt@vwl.uni-freiburg.de).

Article written by Enno Schmidt and edited by André Coelho. 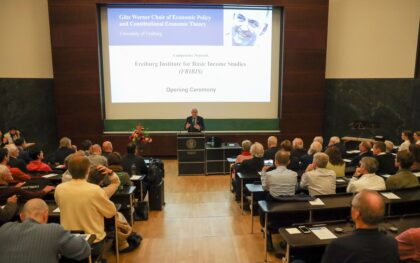 General view of the Conference room

3 comments Freiburg Institute for Basic Income Studies, University of Freiburg
The views expressed in this Op-Ed piece are solely those of the author and do not necessarily represent the view of Basic Income News or BIEN. BIEN and Basic Income News do not endorse any particular policy, but Basic Income News welcomes discussion from all points of view in its Op-Ed section.