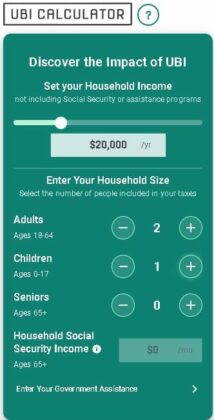 Go to ubicalculator.com and get an ideia of how universal basic income plans, as presented up to this moment in time (for the United States reality), affect you and/or your family. Given individual or household income, plus a few other datapoints, such as family composition and social security income, the calculator uses plans by Max Ghenis, Scott Santens and Andrew Yang, to name a few, to deliver how much your economic situation is changed under those plans. The ubicalculator website also delivers detailed information on each plan, justifying and explaining the results.

This UBI calculator is an initiative by Conrad Shaw, UBI Trial Manager and The Bootstraps Project co-producer. All the methodology used to construct the calculator can be found here.

One comment Conrad Shaw, Online UBI calculator, United States
The views expressed in this Op-Ed piece are solely those of the author and do not necessarily represent the view of Basic Income News or BIEN. BIEN and Basic Income News do not endorse any particular policy, but Basic Income News welcomes discussion from all points of view in its Op-Ed section.