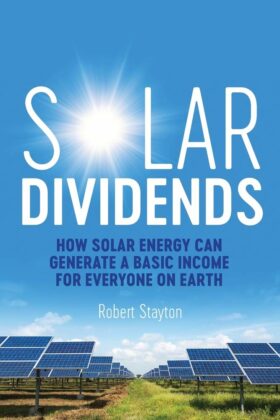 Undertitled “How solar energy can generate a basic income for everyone on Earth”, this new book by Robert Stayton rides on an apparently radical idea: that all people on Earth can earn a basic income, financed from the generation of solar electricity alone. This comes from a known scheme used to incentivize the generation of solar electricity, the feed-in tariff, but other financing mechanisms are also suggested in the book, such as combination with carbon taxes, redirecting existing subsidies on fossil fuel companies to solar electricity generation and taxing corporations from feeding on common held resources (commons).

Leave a comment Solar dividends, Solar electricity generaltion
The views expressed in this Op-Ed piece are solely those of the author and do not necessarily represent the view of Basic Income News or BIEN. BIEN and Basic Income News do not endorse any particular policy, but Basic Income News welcomes discussion from all points of view in its Op-Ed section.