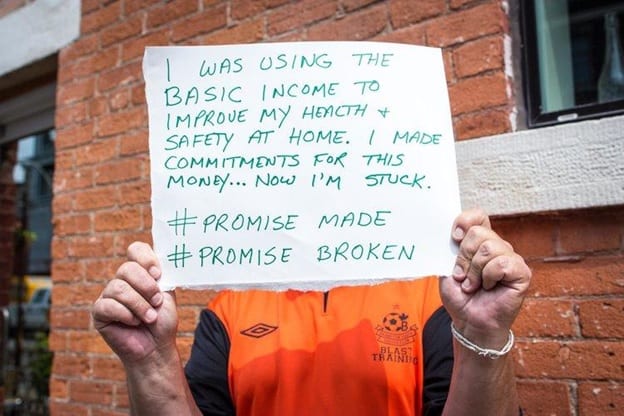 The Ontario Basic Income Pilot, started by a liberal government, was canceled on July 31st 2018, by the newly elected Ford administration. The conservative government has announced that the last payment to the 4000 recipients that were part of the pilot program will be on March 31, 2019. This date was announced by Social Services Minister Lisa MacLeod, claiming this is a “lengthy and compassionate runway” to closing the project. On why the project was canceled, MacLeod said: “A research project that helps less than 4,000 people is not the answer and provides no hope to nearly two million Ontarians who are trapped in a cycle of poverty.” The general justification of the new government is that the program was failing, although a clear explanation of what is meant by that has not been given. MacLeod says that Ontario should develop a “sustainable social assistance program that focuses on helping people lift themselves out of poverty”, while also characterizing Basic Income as a  “handout” that does not break the cycle of poverty, even though she did not share the study results that led to this conclusion. MacLeod did not mention that 70% of the Basic Income Pilot recipients are working and that, apart from the baseline data, no surveys were completed, so there is nothing to support the idea that the pilot was failing.

The reactions to the cancelation announcement have been many, including a class action suit filed by four Lindsey residents, represented by lawyer Mike Perry, who is launching a lawsuit based on anticipatory breach of contract and administrative law. The Basic Income recipients claim they “made plans to improve their lives when they signed up for the pilot in April last year, providing the government with detailed personal information to be approved and expecting the pilot to run its three-year term.” Tom Cooper, of the Hamilton Roundtable for Poverty Reduction, said that the six-month wind down still leaves many Basic Income recipients in “impossible situations.” Mr. Cooper says: “Many have signed one-year lease agreements with landlords and they can’t get out of those leases and they can’t afford their new rent. There are many people who plan to go back to school in September. Whether that will still be a reality for them with a longer wind down is questionable.”

Other reactions included a protest at Queen’s Park on August 9th in Hamilton, and another one in Lindsay, were around 100 people participated. The Queen’s Park protest had about 30 Basic Income recipients asking questions as to what the future holds for them. Since the cancelation decision was made and announced before the participants were notified, they found out via the public media and were anxious about what was in store for them. In the Scott Thompson Radio Show, Tom Cooper says that “conservatives promised them not once but twice, during the election, that it would run for the full three years.” He also mentions the case of a young woman, as an example of how canceling the Basic Income Pilot before term can cause havoc to the recipients life: “A young woman who is trying to get her children back from children’s aid, she did everything she was supposed to, getting a new apartment, so that her children could live with her, she signed a lease about a month ago, and now finds out the program has been canceled and she can’t even afford the lease anymore.”

The Mayors of Hamilton, Lindsay, Thunder Bay and Brantford have all signed a joint letter to the Federal Government asking it to consider a federal adoption of the pilot. Hamilton Mayor, Fred Eisenberger, just joined the other four Mayors on September 5th.

This idea is also defended by  Sheila Regehr, chair of the Basic Income Canada Network, when she said: “If Ottawa completed Ontario’s $50-million-a-year pilot, the results would either support or dismiss the feasibility of a national basic income.” Also, according to Sheila Regehr, “Ethics complaints have been made by a few people to Veritas, the company the previous government hired to ensure ethical standards are met in the conduct of research involving human beings.”

There was also a piece by Prof. Gregory Mason, an associate professor of economics at the University of Manitoba. Prof. Mason argued that these experiments have limited use and that there were flaws in the “random assignment of participants”. Prof. James Mulvale wrote another piece, The cancellation of Ontario’s basic income project is a tragedy, where he answers some of Prof. Mason’s points while Evelyn Forget, also a professor at the University of Manitoba, sent a letter to the editor rebutting Prof. Mason’s criticisms.

There are several petitions: one was created partly by Basic Income recipients, Jodi Dean helped create Leadnow, others are North99 and the Council of Canadians. According to Sheila Regehr, actions will continue when the legislature resumes on September 24th, activists are planning events coinciding with the fall session of the legislature, including a presentation of the Leadnow petition.

James Mulvale, “The cancellation of Ontario’s basic income project is a tragedy”, The Conversation, August 20th 2018