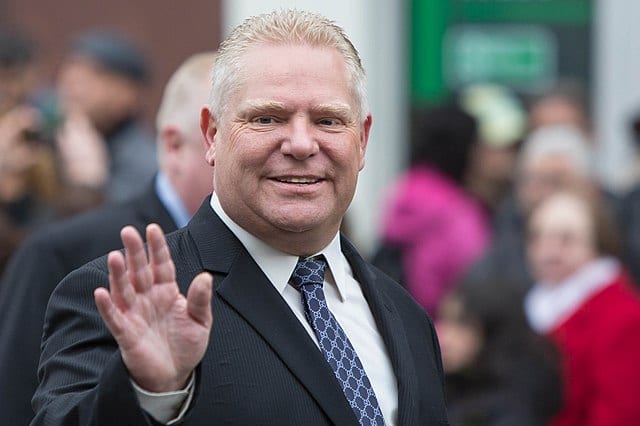 Ontario’s new center-right government announced on July 31 that it will “wind down” the Canadian province’s experimental trial of a type of guaranteed minimum income.

The experiment, which has been providing 4,000 low-income Ontarians a guaranteed annual income of C$16,989 for single individuals and C$24,027 for couples, had been launched in April 2017 and originally slated to continue for three years.

Lisa MacLeod, Minister of Children, Community and Social Services, announced the project’s cancellation during a press conference on the recently elected government’s plan to address poverty and reform social assistance (video below).

Her spoken remarks were accompanied by a News Release and Backgrounder from the Government of Ontario Newsroom.

The experiment had been created and launched under the province’s previous government, led by Premier Kathleen Wynne and the center-left Ontario Liberal Party. On June 7, 2018, the Progressive Conservative (PC) Party emerged as victors in Ontario’s general election, with Doug Ford as new Premier.

However, despite the government’s shift to the right, there was no initial anticipation that the guaranteed income experiment would be cancelled after the Ford government assumed control on June 29.

On the contrary, as recently as April, a spokesperson had told reporters at The Star that the PC Party would continue the guaranteed income pilot. In an article dated April 24, the Toronto-based newspaper states that party spokesperson Melissa Lantsman replied, “Nope, as mentioned we look forward to seeing the results,” when asked if a PC government would “kill the innovative experiment.”

At Tuesday’s press conference, however, MacLeod unexpectedly announced that the provincial government has established a 100-day deadline to develop a “sustainable social assistance program that focuses on helping people lift themselves out of poverty,” which is to focus on the reintegration into to the workforce of those who are able to work.

After castigating the preceding Liberal government for creating a “mess” and “patchwork system” of programs, MacLeod stated, “We are also going to wind down the Ontario basic income research project, which is clearly not the answer for Ontario families.”

In another controversial announcement, MacLeod declared that the government would increase support to those who enrolled in the province’s existing social assistance and disability programs, Ontario Works and the Ontario Disability Support Program, by 1.5 percent — in contrast to the 3 percent promised by the previous government.

Following her prepared remarks, the Minister of Children, Community and Social Services fielded questions on the government’s decision to discontinue the guaranteed income trial. When pressed to provide data or specific examples to corroborate her claim that the piloted program is “clearly not the answer” for poverty in Ontario, she offered no details, stating only that the pilot is “not doing what it’s intended to do,” “quite expensive,” and “for the amount it was costing … certainly not going to be sustainable.”

Similarly, initial announcements released on the Government of Ontario Newsroom said only that the Ministry will be “winding down” the research project “in order to focus resources on more proven approaches,” and that “three-year study of no-strings attached payments is not the answer Ontario families need.”

MacLeod initially divulged no details concerning how or when the project will be terminated, stating only that she wanted “to assure Ontarians on the pilot project right now that we will do it ethically.” On the following day, however, a news report from the Canadian Press noted that experimental participants “received an email Wednesday saying their payments would continue through August but got no further details about how the project would be phased out.”

MacLeod has defended the government’s decision to cancel the pilot in the face of opposition and dismay from anti-poverty advocates, other Ontarian politicians (including the leaders of the left New Democratic Party and Green Party), and the program’s beneficiaries (see, e.g., CBC, HuffPost Canada, and The Lindsay Advocate, the local newspaper of one of the experiment’s major test sites).

On the day following the announcement, she told the press that the program was “a disincentive to get people back on track” and failed to help beneficiaries become “independent contributors to the economy,” adding, “When you’re encouraging people to accept money without strings attached, it really doesn’t send the message that I think our ministry and our government wants to send. We want to get people back on track and be productive members of society where that’s possible.”

With nearly two years of the trial remaining, no results of the experiment had yet been formally analyzed. However, some participants, such as members of Hamilton’s Living Proof, had voluntarily shared personal anecdotes about how the guaranteed income program was improving their lives.

Not Really a “Basic Income” Pilot

The amount of the payments to experimental participants was conditional on household status (couples receive less than single individuals living apart) as well as income (the amount of the benefit is reduced at the rate of 50% of additional earned income). For these reasons, the program being tested in Ontario was not technically a basic income as defined by BIEN. As Karl Widerquist has recently pointed out, it is more aptly described as a negative income tax.

However, the project has standardly been called a “basic income” experiment by the Government of Ontario, and the Basic Income Canada Network, BIEN’s Canadian affiliate, has accepted the usage; for example, the latter convened the 2018 North American Basic Income Guarantee Congress at Hamilton, Ontario, one of the experiment’s test sites, and invited participants and researchers as featured speakers. In general, the basic income community has taken a keen interest in the experiment, and one not borne out of mere terminological confusion; even if not a basic income strictly speaking, the piloted program eliminated many conditionalities central to most welfare programs in Canada and other developed nations, such as the requirement to work or look for work.

Correspondingly, basic income advocates have reacted vociferously to the sudden and unexpected announcement of the project’s premature demise. Roderick Benns, one of Canada’s leading journalists on the topic, has summarized the decision as “ideologically driven,” “mean-spirited,” and “wrong.” The US-based Economic Security Project, which is currently funding the development of a basic income trial in California, also responded quickly to the announcement with a blog entry condemning the move as “short-sighted and irresponsible,” undermining promising research as well as hurting the lives of the program’s recipients.

Earlier in the year, news media inaccurately reported that the Government of Finland was also about to pull the plug on its two-year basic income experiment launched at the beginning of 2017. In this case, however, the government had announced only that it would not fund any extension or expansion of the project beyond this initial two-year trial, prompting the government body responsible running the experiment to issue a clarificatory statement.

While the announcement from Finland was a disappointment for those researchers and advocates who had hoped for an expansion of the experiment, the Finnish experiment will be completed and analyzed as originally planned. In contrast, the Ontario government does intend what had earlier been feared in Finland: the premature termination of its experiment as early as this month.

Official news releases from the Government of Ontario can be followed and accessed here: https://news.ontario.ca/newsroom/en.

The previous provincial government’s official website on the pilot study is still available “for archival and research purposes” here: https://www.ontario.ca/page/ontario-basic-income-pilot.