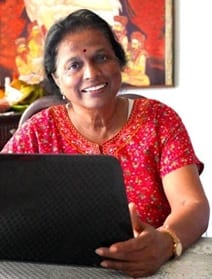 The beginnings of a formal Basic Income movement in Sri Lanka

Basic Income Sri Lanka (BISL) was founded two years ago by Selvi Sachidanandam and colleagues based in Colombo, the capital of Sri Lanka. Initially, the group’s activities were to meet from time to time and discuss what Basic Income meant and how it was relevant to the Sri Lankan context. The Basic Income developments taking place in neighbouring India in 2017 also acted as stimulants. In India, the Self Employed Women’s Association (SEWA) conducted a pilot project on Basic Income between 2011 and 2013 and brought out a report and a book in 2015. The India Network for Basic Income was also formed in 2015. In February 2017, the Chief Economic Advisor to the Indian government, Arvind Subramanian, authored a full chapter on Universal Basic Income for discussion in the Indian parliament.

In 2017 and 2018, BISL made overtures to the Sri Lankan government to organize a workshop to raise awareness about Basic Income and its desirability as a policy direction in Sri Lanka. Despite attempts made to reach out to political leaders and bureaucrats, BISL has thus far only been able to work within civil society, building awareness among NGOs and within the art community.

As of August 2018, there have been two important articles in the Sri Lankan press. The first, by Talal Rafi in the Sri Lankan Daily Financial Times, is a piece intended to provide general information about the global UBI movement; it invokes automation and rise of artificial intelligence. The second and more significant article by Sri Lankan sociologist Laksiri Fernando (based in Australia) appeared in both the Colombo Telegraph and Daily Mirror. This article delves deeper into the question of UBI’s relevance to Sri Lanka.

UBI discussions often begin with burning local issues and contextual priorities, and Sri Lanka is no exception in this regard. Thirty years of war in Sri Lanka left deep scars on the entire society. Many parts of Sri Lankan society bore immense suffering, and they continue to do so. Today, war widows experience insecurity and isolation across the country: in the Northern and Eastern Provinces there are numerous Tamil widows, and in the south there are also the widows of soldiers who died in the war. Nearly ten years after the end of the war, there still is no coherent state policy to address this social calamity. According to a report by the International Crisis Group submitted (2017), there are more than 90,000 war widows in the northern and eastern regions of Sri Lanka. This estimate does not include the families of ‘missing persons,’ and the wounds of war are much deeper than what these statistics show. According to one estimate, in the northern region, there are about 58,000 households headed by women (one quarter of total number of households).

BISL grants and work with the Government of Sri Lanka

It was in this context of providing aid to war widows that BISL brought forth the idea of basic income. BISL believes that giving an unconditional basic income to these widows for a period of 10 or more years could be an effective policy approach. Instead of waiting for the government to adopt this idea, BISL decided to award basic income to some war widows from the north and east through donations from private individuals, as a symbolic gesture. Simultaneously, a study has been initiated to examine the efficacy of Basic Income in this context.

In addition to the war widows from the North, BISL selected two other categories for the basic income awards: an artists’ community in Colombo, and women from a Muslim fisherpersons’ union in the East. These three groups were chosen to maintain a geographical balance; BISL took a cross section of Sri Lankan society to demonstrate the universality of vulnerability across the socio-cultural spectrum, as well as the potential universal applicability of Basic Income. On July 18th 2018, BISL organized a ceremony for five awardees chosen randomly from the first two communities. Three Tamil war widows from Kilinochchi and two artists from Colombo were given the Basic Income grants. Awards to the third category will be distributed once sufficient funds are collected; BISL can raise money for only five awardees at the present time.

Currently, each award is 10,000 Sri Lankan Rupees per month for a period of two years (roughly US$63 per month). This calculation is based on the World Bank’s definition of the poverty threshold as US$1.90 consumer expenditure per person per day. The ceremony was attended by about 40 people including civil society actors, government officials, artists, and students. BISL also invited Sarath Davala, the coordinator of India Network for Basic Income to share the results of the Indian pilot study and the policies pertaining to basic income in India. 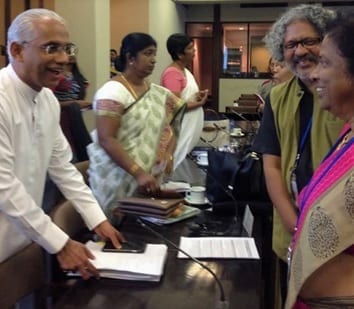 On the left: Eran Wickramaratne. On the right: Sarath Davala and Selvi Sachidanandam.

The event received wide publicity in Colombo. The next day in Parliament, a women’s caucus met to discuss policy related to war widows and disabled persons. Selvi Sachidanandam was invited to make a presentation on BISL’s proposal concerning a policy for rehabilitating war widows. Taking advantage of the opportunity, Selvi and Sarath both attended the meeting and made presentations to the honourable Members of the Parliament. Also present was Sri Lanka’s State Minister of Finance (Hon) Eran Wickramaratne. After the presentations, the Minister assured BISL that the government would study the idea of unconditional basic income in depth. Assurances were given on behalf of BISL and INBI to the honourable Minister that assistance would be provided in every possible way to the government process.

Subsequent to this meeting, Selvi, Sarath and the BISL Co-Coordinator Visakha Tillekeratne met the Deputy Director General of the Department of Planning of the Sri Lankan Government. A detailed presentation was made to the deputy director and his colleagues. Following this work with government officials, BISL will undertake a brief study of current welfare policy delivery in two districts and examine the schemes that are implemented by the government of Sri Lanka. This study will analyze the comparative efficacy and relevance of unconditional basic income to specific groups in different parts of Sri Lanka.

The developments described in this report are a major leap in the basic income movement in Sri Lanka. BISL is keen to build on this momentum.

“ASIA/SRI LANKA – War widows are the most affected by the conflict which lasted over 30 years“, Agenzia Fides, August 1st 2018