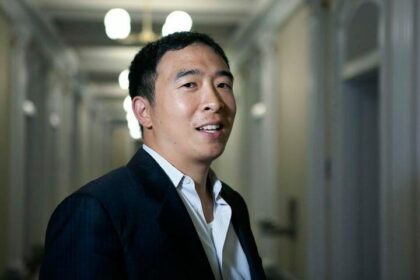 Andrew Yang has already made his name known by leading a presidential campaign which defends the implementation of basic income. Now he extends that with an interview for the Merion West journal, a news outlet particularly associated with low biases. In that interview, posted on the 9th of May, Yang affirms his conviction that humanity is going through an unprecedented shift, while the (United States) political class “is completely asleep at the switch”.

Yang, as other influential people in the United States, especially those dealing with technological developments and digital-based companies, is very worried about the job loss wave in the United States, due to automation. According to him, that is already happening, and will deepen in the near future. To counteract the predictable consequences of such job displacement “by software, AI, and machines”, he defends the implementation of a 1000 US$/month per adult basic income, which he calls a “freedom dividend”. That and a “human-centric capitalism”, an economic system which measures things like “childhood success rate, mental health, levels of engagement with work, freedom from substance abuse”, instead of GDP.

Asked about a possible parallel with the Industrial Revolution, where, despite strifes and strikes, displaced people eventually found new work, Yang says that (referring to manufacturing workers in the Midwest) “there was no magical reorganization of work; instead, many workers went home and killed themselves by the numbers”. According to him, anyone thinking this “magical reorganization of work” is possible, is “not paying attention to the real data on the ground rate now”.

As for basic income itself, Yang approaches it with a certain humour, even, when he says “One thing I’m looking forward to asking, when I’m president, which state would like to have universal basic income first?” However, he states it very seriously when putting forth his conviction that “universal basic income would dramatically improve the lives of tens of millions of individuals and families. There might be some tweaks and tailoring, but I’m very bullish on the substance”.

As for financing, Andrew Yang is confident that a basic income of 1000 US$/month per adult is affordable, considering its price tag is around 2 trillion US$ per year, compared with current welfare costs of 6 trillion US$ per year. That doesn’t equate to ending all welfare benefits, but that it is possible to include basic income within the benefits systems, by introducing an unconditional parcel. Even still, he defends, like Phillipe van Parijs has also proposed in the European context, basic income can be mostly financed with a value-added tax around 10%, or about half of what is practiced in Europe, on average. An expectation of further economic growth, due to a rise in aggregated demand by influence of the existence of a basic income, will self-finance the rest, given an equivalent rise in collected taxes.

Yang also believes that the US current system of social security, health and education are essentially broken, categorizing them as “dysfunctional welfare systems”. According to him, these systems generate vast disincentives amongst the population, or benefit traps. Hence, the introduction of basic income could break those economic and social traps, by providing a financial floor cumulative with earnings from a job. As far as economic policy is concerned, he concludes the interview with a deeper, more general call to society: “In America, we won’t trust our people, but the only thing we will trust are systems, and more systems and processes—and it’s immensely counterproductive. We need to start trusting our people again; we have to trust ourselves.”

One comment Andrew Yang, presidential election, United States
The views expressed in this Op-Ed piece are solely those of the author and do not necessarily represent the view of Basic Income News or BIEN. BIEN and Basic Income News do not endorse any particular policy, but Basic Income News welcomes discussion from all points of view in its Op-Ed section.