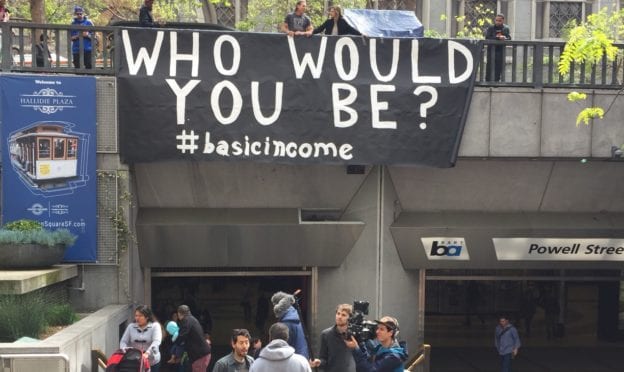 Organized by the Universal Income Project, the goal of the Create-a-thon is to spread awareness and raise support for the idea of basic income. Forty people attended the weekend-long event in March, including filmmakers, artists, entrepreneurs, technologists, songwriters, and activists.

The weekend kicked off with speakers from the Haas Institute for a Fair and Inclusive Society, the Insight Center, HandUp, and the City of San Francisco, the focus of their talks being inequality in society and how basic income could address these issues. After this first session, attendees were invited to pitch their project ideas to the group, work groups were formed and the scope for the work to be produced over the weekend was discussed. The teams worked in conference rooms with whiteboards and flip charts, face-to-face and through Slack channels. The weekend was filled with work sessions from morning to evening, with discussions, exchanges of ideas, and debates ongoing throughout the project processes, as well as on lunch and dinner breaks. The participants got to know each other better and shared diverse viewpoints on the most important issues in societies both in the US and around the world.

According to Shandhya, one of the organizer of the Create-a-thon, “These participants came up with over 20 project pitches, which coalesced into eight inspiring projects that ran the gamut from podcasts to public displays, and included a legislative scorecard as well as plans for a basic income board game.”

The Economic Security Project provided extra motivation by offering a cash stipend of up to $3000 to projects that would spread awareness and raise support for the idea of basic income. The Economic Security Project is “a two year fund to support exploration and experimentation with unconditional cash stipends”. Several of the weekend’s projects received funding for further development.

As Philippe Van Parijs, co-author of Basic income: A Radical Proposal for a Free Society and a Sane Economy, highlights, “In the effort to achieve Basic Income in our society we will need Visionaries, Machiavellian Thinkers and Indignant Activists.”

The Basic Income Create-a-thon is a forum that can provide a framework for activists to gather and cooperate.

See interviews with participants in this video.