An Interview with André Coelho 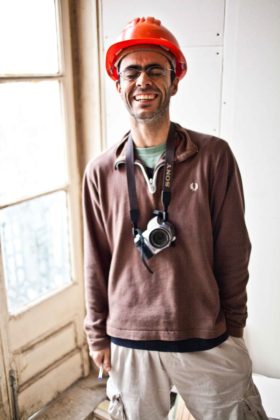 What made you become an activist for basic income, and devote so much time to it?

A revolution is taking place here and now, and each person has a choice: to be an active part in that revolution (to work for it to succeed), to be a passive part in it (to let it happen, if it must), or to fight against it. For me, the latter is just plain nonsensical. To be passive does not quite go along with my character, so I guess I could only go with the first one.

I identify with this revolutionary course – the implementation of basic income – because it’s about recognizing the humanity in us all, of our birth right to a decent living, and enough freedom to actually pursue happiness in this life.

What are other terms or phrases for ideas associated with, but not the same as, Basic Income (BI)? What characterizes them?

In most welfare states there are social benefits in place, paid in cash or in the form of tax credits. However, all of them are conditional, usually on income and/or willingness to take up a job. In Portugal, for instance, there is a minimum insertion income (RSI), which is only given to people who clearly show they have no other source of income.

There are also, for example, child benefits, disability benefits, income assistance…a whole set of income redistribution schemes, which always entail some conditionality. The only exceptions I know of, other than basic income pilot projects, are the Alaska and the Macau dividends. The latter two dividends, although unconditional, are not basic (not enough to cover basic expenses).

What makes the BI plan of action unique?

If I can put my finger on one main feature, I would say it is its unconditional nature. That’s what makes people roll their eyes around. What? Now we’re giving all this money to people, even if they don’t work? That’s just plain unfair.

Well, of course this is a short sighted opinion at best, and a plain lie at worst. It’s a limited view on our humanity. Usually people view themselves as active and willing to contribute with their work, but then are suspicious that their neighbours will do the same.

Of course that if everyone thinks this way we’ll arrive at an impossible proposition: that everyone is active and willing, while not being active nor willing, at the same time. But apart from our personal sensibilities, results from basic income pilot projects show that people contribute as much or more to society with their work, while receiving a basic income.

And even when slight decreases are observed, these are coupled with investments in education.

What are the most common success stories of BI or similar programs? Any failures?

The basic income pilot projects I usually cite are the Namibian, Indian and Canadian experiences. The first two were experiments in very poor, rural contexts, while the Canadian one was both urban and rural, involving the entire local population.

In all these cases, people receiving the basic income did not stop working (clearly the opposite in the Namibian and Indian cases), health conditions improved, as well as education indicators. There were also other benefits, such as reduced crime rates (in Namibia and India).

I think that, in the context of basic income experimentations, there cannot be ‘failures’. If done properly, these experiments aim to widen our knowledge, while temporarily helping the populations in question.

Of course that, as it was the case in the United States experiments, the results can be “spun” in different ways for political purposes. But that is always a risk attached to any experiment, especially those related with social behaviour.

What country seems the most progressive and forward thinking in implementation of BI?

According to news information around these days, Finland seems to be the part of the world most willing to formally take up the idea of trying basic income. Finnish officials and partners are developing an experiment, which is setup to start in 2017.

However, I would not say that translates necessarily into greater progressiveness than other regions of the world. The Finish experiment is already plagued by several shortcomings, even before it has started (although I still think it’s worth it).

The Canadian central and regional governments, and particularly the latter, are also seriously considering experimenting with the basic income. As well as regional Dutch officials, who are already developing their own basic income experiments (similar to Finland’s experiment).

Let’s also not forget the Swiss case, that recently held a national referendum on the subject. And also Spain, particularly in the Basque region. However, the interest in basic income is growing quickly around the world, so who knows who will implement it first?

Activist networks for basic income are also spreading. At this moment, BIEN already has 30 national and regional affiliates, and this is expected to rise in the next few years.

What is your work on BI?

At Basic Income News, I do writing, editing, training and coordinating. I also represent BIEN, on occasions, as an advocate for basic income in international meetings (up until now, related to the CO-ACTE project).

Locally, I also participate in some actions for our activist network in Portugal, by writing articles, speaking at venues and organizing events.

Any advice for would-be policy makers or activists about strategies for the implementation of BI?

I guess that if I could choose one piece of advice it would be not to consider basic income as a ‘miraculous’ cure for all social problems. Basic income is a helpful tool, even a crucial one, but cannot replace a “systems approach” thinking about society, a holistic view.

Also I would recommend to self-analyse and make clear why each of us is defending basic income, and how we think it should be implemented. Because the devil is in the details, and basic income can get “dirty” when analysed in its implementation depth.

I have been, more than once, challenged by the possibility of a “right-wing” basic income, which would come as a replacement of all other social benefits and welfare state public systems, including health and education.

This approach to basic income is common among the “right-wing” side of the political spectrum. It is dangerous and a real possibility which all activists should be aware of if they really care about the wellbeing of present and future society.

Thank you for your time, André.

Leave a comment André Coelho, Canadian, Finnish, Indian, Namibian, Portugal, Scott Douglas Jacobsen, United States, welfare states
The views expressed in this Op-Ed piece are solely those of the author and do not necessarily represent the view of Basic Income News or BIEN. BIEN and Basic Income News do not endorse any particular policy, but Basic Income News welcomes discussion from all points of view in its Op-Ed section.