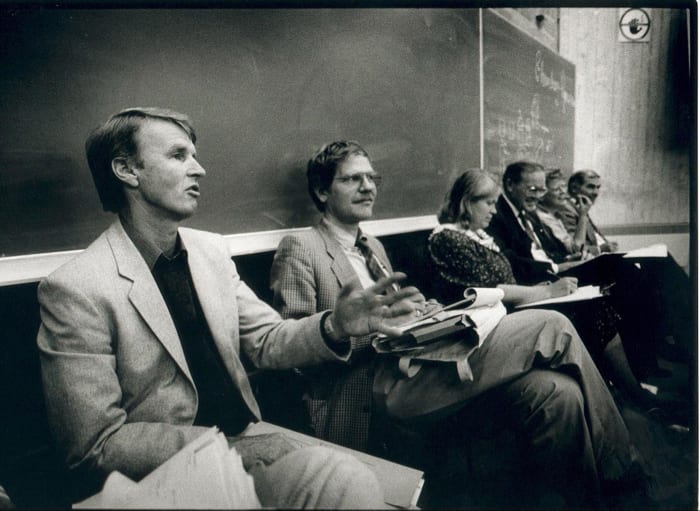 An event commemorating the anniversary of BIEN’s founding will take place on Saturday, October 1 in Louvain-la-Neuve, Belgium–the location of BIEN’s first meeting 30 years ago.

The anniversary event has been organized by the Hoover Chair of Economic and Social Ethics at the Université Catholique de Louvain in collaboration with BIEN. 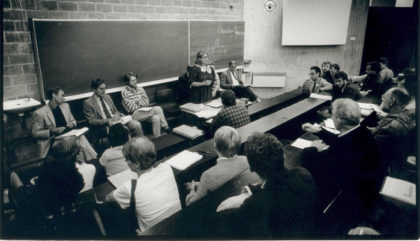 Participants in the conference that launched BIEN

About the Anniversary Event

Two parallel sessions will take place in late morning: one on the history of basic income (featuring Pierre-Etienne Vandamme on “Voltaire before Paine”, Guido Erreygers on “Brussels 1848” and Walter Van Trier, BIEN’s first secretary, on the British interbellum period); the other on implementations of basic income (featuring Philippe Defeyt on an income-tax-funded basic income of EUR 600, David Rosseels on micro-taxes on electronic payments, and Karl Widerquist on sovereign funds).

In the afternoon sessions, Enno Schmidt, co-founder of the Swiss popular initiative on basic income, and University of Lucerne Research fellow Nenad Stojanovic will review lessons learned from the Swiss referendum campaign. Then, discussion will turn to basic income experiments of the past and future. Guy Standing will talk about his work on pilots in India. University of Tampere Research Fellow Jurgen De Wispelaere will discuss the upcoming experiment in Finland, and BIEN cofounder Alexander de Roo (now chair of the Dutch basic income network) will discuss those to come in The Netherlands.

Finally, the conference will examine where the movement is heading next, with talks from Louise Haagh (BIEN co-chair), Stanislas Jourdan (co-founder of UBI-Europe), Roland Duchatelet (former senator and founder of Vivant), and Yasmine Kherbache (member of Flemish Parliament and, previously, chief of cabinet of former Belgian Prime Minister Di Rupo).

The event will conclude with reflections from two co-founders of BIEN, Claus Offe and Gérard Roland. They will be joined by political philosopher Joshua Cohen (UC Berkeley) and sociologist Erik Olin Wright (University of Wisconsin – Madison).

The anniversary event follows a two-day conference Utopias for our Time, which marks the 500th anniversary of the publication of Thomas More’s Utopia. Some participants in the BIEN anniversary event will also be speaking at this preceding event. For instance, Erik Olin Wright is to deliver a keynote address on the theme of the future of democracy, and Wright and Philippe Van Parijs will contribute to a special session on the question “Should academics engage indulge in utopian thinking?”

For more information on both events, see the event page at Université Catholique de Louvain.

In 1984, three young researchers linked to the Université Catholique de Louvain–Paul-Marie Boulanger, Philippe Defeyt and Philippe Van Parijs–formed a group called the “Collectif Charles Fourier” to explore what they had chosen to call “allocation universelle”. 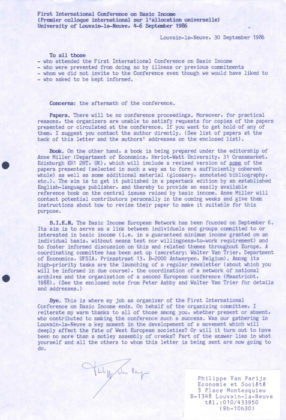 First written documentation of the existence of BIEN

Two years later — fueled by the unexpected earnings from a essay contest, for an essay on the “allocation universelle” — the Collectif Charles Fourier organized a international conference to discuss the idea. The conference, which convened in Louvain-la-Neuve in September 1986, gathered 60 invited speakers from throughout Europe.

Its final session would mark the genesis of the Basic Income European Network. (The name, suggested by Guy Standing, was chosen in part for the “good pun” of its acronym.)

In 2004, BIEN decided to become an inter-continental organization, owing to an increase in interest from outside of Europe. Unable to part with the acronym, the group decided simply to brand itself with the name it has today.

Read more about the history of BIEN.

Stay tuned for videos, photographs, and remarks from the participants, as well as other comments and reflections from current members of BIEN’s Executive Committee.