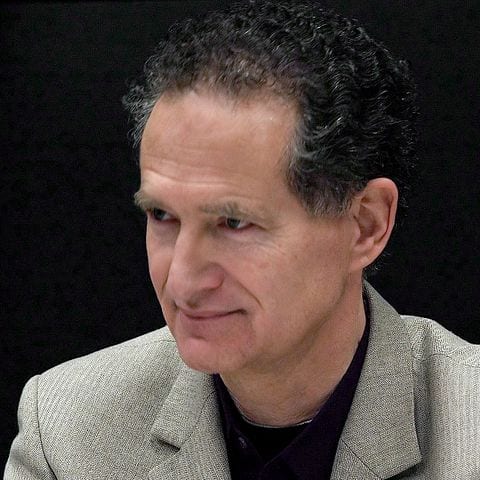 The 20th century was the century of social democracy in Western Europe. But nowadays the social democratic model of the welfare state is in deep crisis. This model — in which paid work is central, full (male) employment is the norm, and social benefits are dependent on performance in paid work — is no longer working and no longer appealing to voters.

The strong political position of social democracy in Western Europe has been based on the strength of labor unions. Economic changes, however, have accelerated the declining membership of unions. The strength of the various social democratic parties has thus been structurally eroded. Consumption and leisure time are becoming ever more important. These factors open the way for basic income as the economic model for the 21st century. 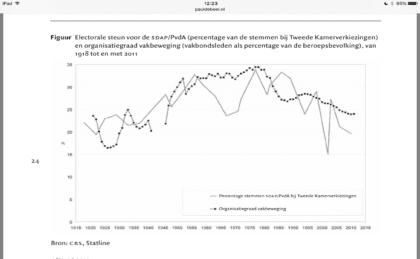 As you can see, there is a structural relationship between the strength of the unions and the electoral strength of the Dutch Labor Party (PvdA – the social democratic party of the Netherlands). The unions are slowly losing members in the Netherlands. The decline is largely due to structural changes in advanced economies. For example, total manufacturing employment in America has fallen from nearly 20 million in 1979 to 12 million today. The kinds of workers who have lost out — unskilled men, in particular — were precisely those who were most likely to belong to a union in the first place. And what has sprung up in their place further undermines unions. If you went to a factory in the 1970s, you would have seen assembly lines of people. Such workers were much more amenable to the idea of “class consciousness”. Go to a factory today and you might you find a few people monitoring robots and other whizzy bits of machinery. Add other economic changes to the mix — globalization (which makes it harder for unions to regulate work), the rise of a more flexible service sector and government policies — and the loss of union clout seems inevitable. More recent reforms to minimum wage and workplace discrimination have also reduced the need felt by individuals to belong to a union. 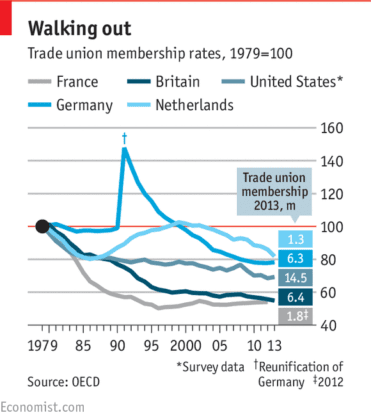 The decline of the Dutch Christian Democratic party

Additionally, the other political party essential to the construction of the Dutch welfare state, the Christian Democratic Appeal (CDA), is in structural decline. Below, we see the electoral results of the CDA over the last 60 years – from an absolute majority in the 1950s and early 1960s to only 10 percent in the 2012 elections.

The blue line represents the three different Christian democratic parties in the Netherlands, which merged in 1980 to form the singular CDA – represented by the green line. 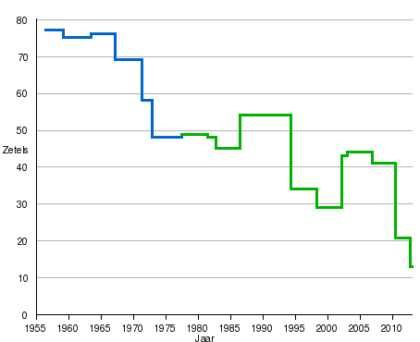 In the general election of 2006 — before the 2008 economic crisis — the CDA and the PvdA together had 46 percent of the vote. That proportion dropped to 32 percent in both the 2010 and 2012 national elections. Today, according to opinion polls, these two parties together command just over 20 percent of the vote. That is to say, the parties of the old social model have declined from 46 percent in 2006 to 20 percent in 2016, losing more than half their support in just 10 years.

Conclusion: Political support for the old welfare state, developed by the Labor Party and the Christian Democratic Appeal, along with the unions, has been completely eroded.

“In the 21st century, technological changes are being introduced into economic and social life at a much faster pace than in the 20th century,” noted Dennis Meadows, one of the authors of Limits to Growth, in a 2012 lecture in Brussels.

One of the most important trends has been the rise of flexible work. This has been especially strong in the Netherlands. Today 20 percent of Dutch workers, amounting to 1.7 million people, are on flexible contracts. The increase seems unstoppable. Unions are demanding that politicians repair this state of affairs by restoring the old model of stable, regulated jobs through legislation.

Alongside the 1.7 million flex workers are 1.3 million people who are self-employed. At least 20 percent of these – 0.3 million people – became self-employed due to a lack of alternatives. The graph below shows the increase in flexible jobs over last 10 years, and the corresponding decrease in regular jobs. The blue bars signify the increase in the number of flex workers, while the brown bars indicate the change (usually negative) in the number of regular workers. 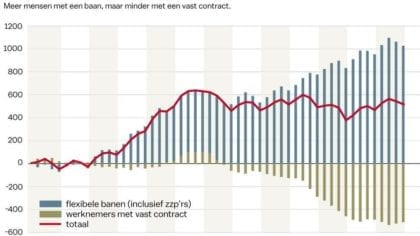 Additionally, there are 0.6 million people officially registered as unemployed, and 0.4 million who depend on social benefits (“Bij-stand” in Dutch). In total, 3 million people and their dependents form the Dutch precariat. Approximately 5 million people still have regular jobs – 10 percent fewer than 10 years ago. And automatization is threatening even these jobs. In the debate in The Netherlands, the position that the rise of the robots will lead to structural unemployment is still minor. However, studies like one from Oxford University show that approximately 50 percent of the jobs that exist today will no longer be secure in 20 years’ time (THE FUTURE OF EMPLOYMENT: HOW SUSCEPTIBLE ARE JOBS TO COMPUTERISATION? Carl Benedikt Frey and Michael A. Osborne; September 17, 2013).

Opportunities for basic income implementation are growing in the Netherlands

“Nothing is more powerful than an idea whose time has come.” –  Victor Hugo

The decline of the two old parties that built the Dutch welfare state, combined with the rise in number of the Dutch precariat, opens the way for a post-social democratic pathway. Basic income has the strongest card. In contrast to the 1980s and 1990s, large parts of the Dutch population are now receptive to the idea of basic income, given that the present welfare system is – in their eyes – no longer worth fighting for.

History of the basic income debate in the Netherlands

There was fierce debate about basic income in the 1980s and 90s in the Netherlands. The Dutch branch of BIEN, “Vereniging Basisinkomen”, was founded in 1989. Before that, an organization called “Workshop Basic Income” promoted the idea. The PvdA almost adopted basic income in its national election program in 1993 (with 40 percent in favor). Then, in 1994, there was a debate about basic income in the national government. On the side of basic income were the Minister of Economic Affairs, Hans Wijers (of Democrats 66, left wing liberals), and the Minister of Finance, Gerrit Zalm (the People’s Party for Freedom and Democracy, right wing liberals). On the other side, the Prime Minister, Wim Kok (of the PvdA), argued successfully that basic income’s time had not yet come, claiming it to be a topic for 30 years down the line. The economic upswing of the early years of the new millennium subsequently overshadowed this discussion in the Netherlands.

The financial and economic crisis of 2008 changed the economic and political landscape. And, over the past three years, the basic income discussion has returned to the Netherlands, becoming much more intense than it was 25 years ago.

Even with the recent economic upswing, the old status quo — under which almost all adult citizens had a secure, regular job — is history. A new scheme of social security is urgently necessary. The general public recognizes this.

In a recent national poll, 40 percent of the Dutch population declared themselves to be in favor of a basic income, with 45 percent against and 15 percent expressing uncertainty. The voters of the three left wing parties are in favor, with their endorsement breaking down as follows: GreenLeft 60 percent, the Socialist Party 54 percent, and PvdA 53 percent.

When we hand out our basic income leaflets to the general public, about 50 percent of people take the pamphlet and react positively, while the other half ignores us. Several times a young couple, arm in arm, would pass me – the young man would nod that he was not interested, but the young woman would leave him to walk back and collect a leaflet! We have lively discussions with the public. Even young people who were not alive 25 years ago, when that first debate raged, have already a very good idea of what basic income is. I have been active in politics for 42 years and I have never encountered so much enthusiasm.

Free money for everyone

The return of the basic income idea to the Dutch debate has been invigorated by a book by the young historian Rutger Bregman (only 28 years of age), Gratis Geld voor Iedereen (Free Money for Everyone), which was published in September 2014, along with a few national television documentaries. Bregman’s influential book on basic income is now available in English, under the title Utopia for Realists.

Petition for the Dutch parliament

Local experiments with basic income
Several basic income experiments are planned in the Netherlands. Nineteen municipalities have officially declared their willingness to initiate such an experiment to the Ministry of Social Affairs and Employment. Utrecht, Groningen, Tilburg and Wageningen were the first four to do so, and they are currently in conversation with the State Secretary for Social Affairs and Employment in order to establish the necessary space in the law. These experiments will not comprise trials of a full basic income, even though many are based on the idea of a basic income. Instead, elements of a basic income are to be implemented in these experiments within the rubric of the current Dutch minimum welfare scheme (“Bij-stand”). More precisely, for the experiment participants, allowances will be made unconditional, allowing recipients of the minimum welfare to earn money simultaneously and thereby removing the currently existing poverty trap.

Various questions will be addresed by these experiments:

A large majority of the parliament is in favor of the experiments, but the details are still under discussion nationally, and there is a legal process that must be completed. If all goes well, the first experiments will start in January 2017. 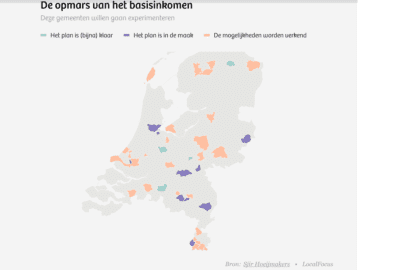 The experiments should have already started, in fact, but the national government is very slow in giving the green light. The Dutch GreenLeft asked the national parliament in November 2015 to clear the way for these experiments. Fifteen of the 17 political groups in the national parliament said yes, with only Wilders’ Party for Freedom and Prime Minister Rutte’s People’s Party for Freedom and Democracy saying no. According to the latest update, the government is now working on an administrative decree which will allow the 25 most advanced municipalities to start their experiments in January 2017. That is likely to annoy the other 50 municipalities that also wish to initiate their own experiments.

Since the national elections are set for March 17th, 2017, this issue will most likely play a role in the national election campaign. It is likely that the left wing parties (GreenLeft, PvdA and, perhaps, the Socialist Party) will put forward demands for a Finnish-style experiment of basic income during the 2007 national election. One small party, the Cultural Liberal Party, is already advocating for the introduction of a basic income of €800 in the Netherlands.

The Dutch branch of BIEN has developed a model to raise VAT and environmental taxes, while removing most tax exemptions, to fund a basic income of €1100 per person. In the long run, this amount should be increased to €1400. The option of a small tax on financial transactions is also of interest in this regard. We oppose models that would fund basic income solely on an increase of taxes on labor. The Dutch Central Planning Bureau did just that in 2006, resulting in 56 percent income tax for everyone and a five percent increase in unemployment. We are instead fighting for a new calculation based on increasing consumption taxes so as to make it clear to the public that a basic income is (easily) affordable.

Alexander de Roo (alexanderderoo@gmail.com) was one of the founding fathers of BIEN and served as BIEN’s treasurer from 1986-2006. He studied chemical technology in Delft (1972-1978) and political science in Amsterdam (1976-1982), and was a GreenLeft Member of the European Parliament from 1999-2004.