On June 5th, the people of Switzerland will go to the polls to vote on a referendum to enact a basic income — marking the first time that a basic income has been submitted to the popular vote. Although the basic income initiative received little support in Parliament, about 40% of Swiss citizens support the referendum, according to a recent survey.

A new book, Voting for Freedom by Daniel Häni and Philip Kovce, lays out the arguments for a basic income in Switzerland, and explains why the referendum is a “milestone in the advancement of democracy.” 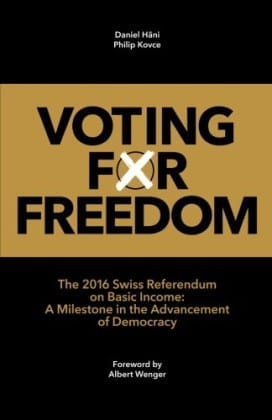 Daniel Häni was one of the instigators of the popular initiative for a basic income; he is also CEO and co-founder of unternehmen mitte, Switzerland’s largest coffee house. Philip Kovce is a freelance writer and a researcher that the Basler Philosophicum and Witten Institute of Economics and Philosophy, as well as a member of Think Tank 30.