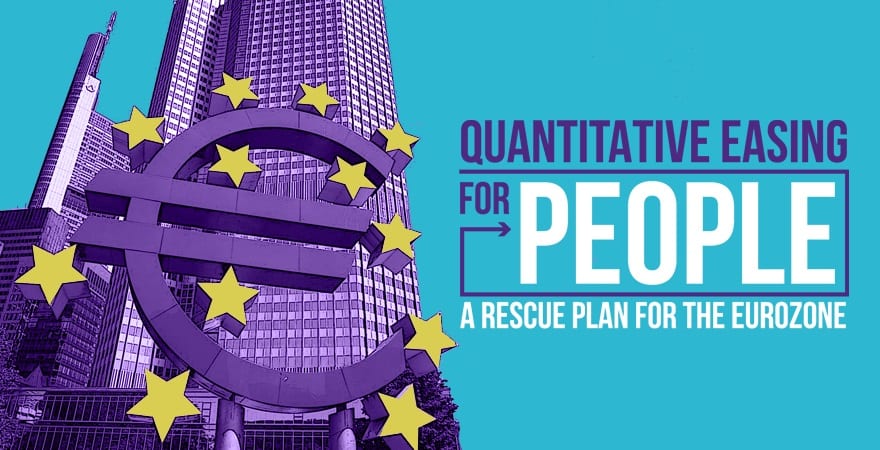 QE is an unconventional monetary policy used by central banks to stimulate the economy. It usually consists of buying government bonds or other securities in order to lower interest rates and increase the money supply. QE began in the eurozone earlier this year, and the ECB is currently creating 60 billion Euros each month. Matthias Kroll from the World Future Council said: “So far the ECB’s QE program has proven to be ineffective in raising inflation back to its 2% target.”

“Flooding financial markets inflates share and bond prices, which makes the rich richer, but does little to help households and business. In fact, QE is helping fuel a new financial bubble, laying the foundation for another financial crisis. The eurozone needs a more direct and efficient stimulus.”

European stock markets plunged on December 3, when Draghi announced that the current QE program would be extended by six months to March 2017. This is a sign that even large corporations and financial markets do not believe in Draghi’s QE and expect more.

The aim of the QE for People campaign is to push the ECB to spend the money differently, by focusing on public investment, key social services or redistributive mechanisms like a citizens’ dividend – the last idea resonating well with basic income activists.

The proposal was first put forward in a letter signed by 19 economists and published in the Financial Times in March this year:

Rather than being injected into the financial markets, the new money created by eurozone central banks could be used to finance government spending (such as investing in much needed infrastructure projects); alternatively each eurozone citizen could be given €175 per month, for 19 months, which they could use to pay down existing debts or spend as they please.

Cash transfers under QE for People and basic income have common features. Both are directed to all citizens, with no strings attached. The time dimension differs though, as QE measures are by definition temporary, while basic income is a permanent scheme.

The 75 experts who support the campaign include several pioneers of the idea, such as Professor Steve Keen, Professor David Graeber and fund manager Eric Lonergan, as well as other influential economists and financial analysts like Ann Pettifor and Frances Coppola. These experts signed a statement of support that lays out the reasons behind the campaign:

1. Conventional QE does not work

Since it started in March, the eurozone QE program has not helped to rescue the eurozone economies from stagnation.

2. Conventional QE is risky and harmful

Flooding financial markets inflates share and bond prices, which makes the rich richer but does little to help ordinary people and businesses. In fact, QE is helping fuel a new financial bubble, laying the foundation for another financial crisis.

3. A more direct approach is needed

4. QE for People is possible

Instead of flooding financial markets, money created through QE should be spent into the real economy, on essential public investment such as green infrastructure, affordable housing and/or distributed as a citizens’ dividend to all residents.

5. QE for People is urgently needed

Given the challenges facing the eurozone, we urge economists, civil society organizations, and people from across the eurozone to join us in calling on the ECB to implement QE for People as soon as possible.

The campaign will focus on raising awareness of the failures of the current QE program, building political momentum around alternative monetary policies and fostering further research. “Having more than 70 economists endorsing the idea is a huge milestone, but this is only the beginning. Our goal is to create a much bigger coalition with citizens, academics and civil society organizations,” said Stan Jourdan, campaign coordinator.

You can join the movement QE for People by signing up here.

Economists can endorse the campaign here.

See also: Stanislas Jourdan, “Europe: 19 economists call on the ECB to make ‘QE for the people’ in a letter to the Financial Times,” Basic Income News, March 27, 2015.