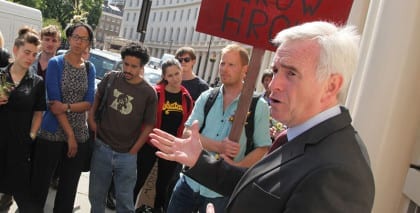 Following Jeremy Corbyn‘s election as the new leader of the Labour party on 12th September, John McDonnell was appointed shadow chancellor of the Exchequer. The shadow chancellor is an informal title referring to the lead economic spokesperson for the opposition in the British parliament.

McDonnell is a basic income supporter. He hosted a session for a Citizen’s Income of ‘The People’s Parliament’ on 4th March 2014, and spoke about ‘the importance of a Citizen’s Income to our current situation and of how its implementation might become politically feasible.’ He also gave a speech at the Citizen’s Income Trust conference held on 6th June 2014.

One comment United Kingdom
The views expressed in this Op-Ed piece are solely those of the author and do not necessarily represent the view of Basic Income News or BIEN. BIEN and Basic Income News do not endorse any particular policy, but Basic Income News welcomes discussion from all points of view in its Op-Ed section.