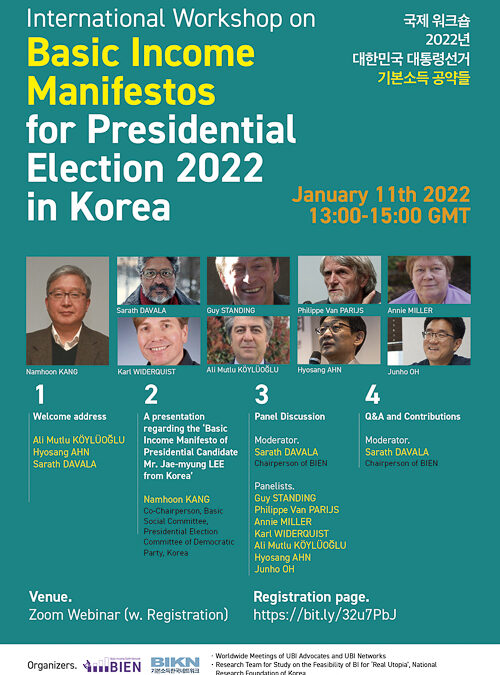 The session lasted about 2 hours and 20 minutes, of which 1 hour and 40 minutes was devoted to introductions, presentations by the keynote presenter and panelists, and comments by presenters. The remaining 40 minutes was Q&A between the presenters and other participants. The total number of participants in the Zoom workshop was 178 from 31 countries. The workshop was moderated by BIEN Chairperson, Sarath Davala.

This was a highly informative workshop with some of the world’s leading advocates and analysts of basic income participating. The political economy of introducing basic income was a key feature of the discussions. Mobilizing revenue by taxation of commons-based income and pollutant emissions for distribution as basic income was emphasized. The political dynamics of having both the leading party and a single-issue party campaigning for basic income was discussed. Also notable were the mechanisms proposed in the keynote presentation for increasing support for basic income through intensive deliberative discussions (along the lines pioneered in Gyeonggi Province) and popular assemblies. 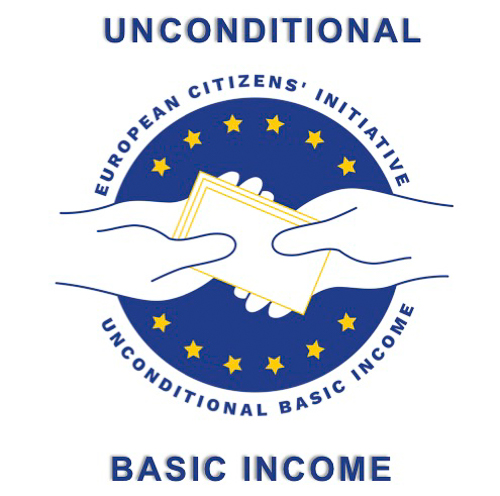 A European Citizens‘ Initiative (ECI) in favor of an EU UBI has been started on 25 September 2020. The collection period currently ends on 25 June 2022.

The ECI proposes “… to establish the introduction of unconditional basic incomes throughout the EU which ensure every person’s material existence and opportunity to participate in society as part of its economic policy. This aim shall be reached while remaining within the competences conferred to the EU by the Treaties.“ Further, the ECI requests “… the EU Commission to make a proposal for unconditional basic incomes throughout the EU, which reduce regional disparities in order to strengthen the economic, social and territorial cohesion in the EU. This shall realize the aim of the joint statement by the European Council, the European Parliament and the European Commission, stated in 2017, that ‘the EU and its member states will also support efficient, sustainable and equitable social protection systems to guarantee basic income’ in order to combat inequality.“

More than 169 thousand have signed the ECI as of 12 January 2022. But one million signatures are required. BIEN life members, BIEN affiliates in the EU and other UBI-Advocates in the EU may support the ECI-UBI-campaign at the following URL: https://de.eci-ubi.eu/.

Advocates of the ECI UBI are also active on the online platform of the Conference on the Future of Europe. It is not only in three interim reports on the online platform that the proposal on Unconditional Basic Incomes throughout the EU is highlighted. The UBI also has a high approval rate at the Europe Talks of major newspapers in Europe.

In order to make UBI (and the European Citizens’ Initiative) even more popular, endorsements and positive comments on the ECI proposal may be given on the online platform of the Conference on the Future of Europe:  https://futureu.europa.eu/processes/Economy/f/10/proposals/1556.

UBIEXP 2022 Essay Prize – “Unconditional Basic Income in Portugal: How Can We Afford It?”

The UBIEXP research group,  from the Centre for Ethics, Politics and Society, together with the Portuguese Basic Income association, invite submissions for the international essay prize competition on the following topic:

“Unconditional Basic Income in Portugal: How Can We Afford It?“

The moral objections to UBI and how it could re-shape a society grounded on work are some of the most puzzling but also most important discussions on the topic. However, they are often side-lined with an important instrumental discussion: can we afford an Unconditional Basic Income? Some microsimulations have been conducted, discussing possible cost structures in the UK (Widerquist & Arndt, 2020), and only one study has been conducted for the Portuguese case (Teixeira, 2019). This essay competition aims to fill this gap, and contribute with additional possibilities to answer the question of whether an Unconditional Basic Income is feasible in Portugal or not.

The organizers welcome submissions that focus on discussing possible scenarios for implementing an Unconditional Basic Income, and how much can those scenarios cost (net and gross). They will value submissions who also look into the possible funding strategies, and incorporate them in the analysis.

Contributions may be sent as email attachments in word format to: nrbmerrill@gmail.com
The winner of the best essay will receive €750 and the essay will be published in the journal Ethics, Politics & Society.

A Research Agenda for Basic Income

Malcolm Torry has been asked by Edward Elgar Publishing to write a book with the title A Research Agenda for Basic Income. To ensure that what he writes will be as useful and comprehensive as possible, he would like to receive as many answers as possible to the question:

What research is now required?

He will use the submissions to create a consultation paper on which further consultation can then take place.

Your reward will be a mention in the acknowledgements.

Dr. Malcolm Torry is a Visiting Fellow at the Institute for Policy Research at the University of Bath, the treasurer of BIEN, author of a number of books about Basic Income, and editor of the Palgrave International Handbook of Basic Income: https://torry.org.uk/basic-income.

The President and Government of Catalonia, part of Spain encompassing seven million people and centered on Barcelona, have announced that there will be a two-year basic income pilot starting next year, providing an unconditional monthly payment to 5,000 individuals.

In November 2020, BIEN co-founder Guy Standing had a long private meeting with the President in his offices about the objectives of the pilot and then held meetings with the officials in charge of designing it, including Sergi Reventós, head of the Office of the Pilot Plan to Implement Universal Basic Income. That office is charged with designing, implementing, and evaluating the Pilot. Raventós hopes the design will be accomplished in 2022 and implementation begun before the end of that year, with evaluation in 2025.  The 5,000 participants in the Pilot will be a sample representative of the Catalan social and economic fabric. Funding for the Pilot has been allocated.

Guy Standing will continue to provide technical advice, based on the principles laid out in his recent article, “Basic Income Pilots: Uses, Limitations and Design Principles” in Basic Income Studies, 2021; 16(1) pp 75-99. In a separate event linked to the initiative organized by La Caixa Foundation in the Palau Macaya, he advocated making a link between the commons and basic income.

A further public event to discuss design issues has been scheduled by the Federation of Catalan Social Action Organization with the Barcelona City Council to take place on December 20.  Guy Standing will be the keynote speaker. Most importantly, the pilot is seen as a way of showing how Catalonia and Spain could move away from the highly targeted, means-tested social assistance schemes that have fared badly during the Covid pandemic.