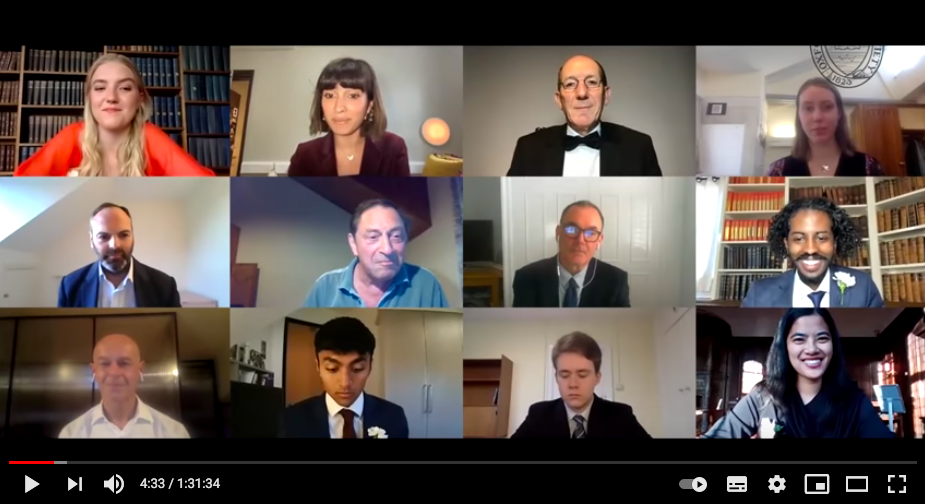 On 29th April 2021 the prestigious Oxford Union Society hosted a panel of students, activists, politicians and scholars to debate the motion ‘This House Would Introduce a Universal Basic Income’.

The full debate can be watched on the Oxford Union’s YouTube channel here, with a programme of the speakers and summary of their key arguments provided below.

00:33 – Opening up the case for the proposition, Classical Archaeological and Ancient History student Ambika Sehgal drew on anecdotal evidence from victims of flaws in the DWP’s (Department for Work and Pensions) systems, experiences from the Covid-19 pandemic, and accounts of early forms of UBI in Ancient Greek societies to make three arguments for the motion:

10:52 – Rebutting with the opening case for the opposition, Eliza Dean, first year Classics and French student and Member of the Union’s Secretaries Committee, denounced UBI as the solution to our current economic and political struggles, arguing instead for better funding of existing state welfare systems and a return to greater recognition of the value of labour in society.

20:58 – Professor Guy Standing, Professorial Research Associate at SOAS University of London and founding member of BIEN, outlined the fundamental ethical – as opposed to instrumental – rationale for introducing a UBI, arguing that we have an ethical justification to introduce UBI to resolve the unequal distribution of wealth created by rentier capitalism.

Rounding off his argument for the proposition, Professor Standing drew on his extensive experience working on over 50 pilots to outline some of the key findings of research on UBI:

36:34 Marco Annunziata, former Chief Economist and Head of Business Innovation Strategy at General Electric, invoked suggestions for the necessary rise in taxes, the case to offer the same amount to the rich and poor, and the disincentives to work as evidence that a UBI is both unaffordable, unjust and riddled with unintended consequences.

48:53 Drawing on simulations run by the RSA (Royal Society for Arts, Manufactures and Commerce) Anthony Painter, Chief Research & Impact Officer, made the economic case for UBI, citing its ability to make up for inadequacies in existing social support systems by offering a hardwired economic platform for all in society.

59:50 Regarding UBI a ‘recurring revenant’ throughout his career, Professor Hilmar Schneider, Director of the Institute of Labour Economics in Bonn, cited the experience of the German pension system and his own research conducting funding and behavioral responses simulation models to argue against the motion. Pointing to the fact that most UBI pilots rely on external funding sources, Professor Schneider argued that the strongest argument against a UBI lies in its unaffordability, as it would ultimately result in more people losing money than gaining money.

01:10:34 William Greve, first year Philosophy, Politics and Economics student and Sponsorship Officer at the Oxford Union,consolidated the arguments made by the panelists to round off the underlying economic and liberal arguments for a UBI:

Drawing on Professor Schneider’s earlier remarks on the case against higher income taxes (owing to the fact that the majority of wealth that exists in the modern economy is not received as an income in the traditional sense), William also argued that a wealth tax, not an income tax, is the most just and feasible way to fund UBI.

01:21:30 Rt Hon Jon Cruddas, Labour MP for Dagenham and Rainham and Former Coordinator for the Labour Party, rounded off the case for the opposition by arguing that those advocating for UBI should remain cautious when their political opponents also support the scheme for radically different outcomes. Noting the many cross-spectrum and cross-ideological arguments for and against the motion, he also pointed to the more ‘mundane and practical’ issues with introducing UBI, such as financial feasibility, its efficacy compared to its alternatives, and what accompanying policies are required to ensure desired outcomes.

Concluding the case against UBI, Rt Hon Cruddas hammered home his argument for the dignity of labour and questioned the role that UBI would play in creating decent work. All but entirely dismissing concerns around automation and the future availability of work, he argued that we should instead be organizing for collective rights, strong unions, income guarantees and above all, dignified labour. He argued that there is a strong case against UBI if you consider that the nature of work thesis is flawed, and that the debate around the future of work is an inherently political one. UBI, he suggested, could transform citizens into ‘passengers of capitalism’, robbing them of meaning and dignity, and leaving them more isolated, vulnerable, angry and humiliated, and society itself less fraternal and solidaristic.