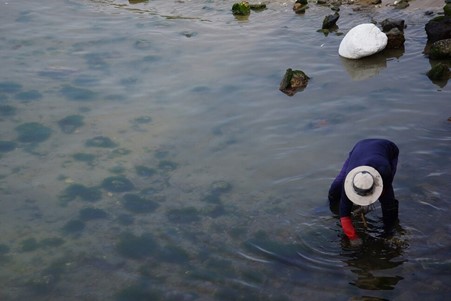 Editor’s note: The use of the term ‘basic income’ for the sheme in Janggo Island does not correspond to BIEN’s definition of basic income, since it is paid not to all residents but to only participants in communal fish farming activities for 20 years, and paid not to individual but to household.

A forum took place on the meaning and issues of the basic rural income social experiment, which Gyeonggi Province plans to conduct in the second half of this year. Entitled, “The Meaning and Issues of the Community-centered Basic Income Social Experiment,” the first Rural Basic Income Policy Forum was held on the 29th of January and introduced cases and discussed India’s basic income experiment, distribution of shared assets in Boryeong, Chungcheongnam-do, and Jeju Island. The Hankyoreh Economic and Social Research Institute with the Gyeonggi-do Agricultural and Fisheries Promotion Agency, the Basic Income Korea Network, Lab 2050, the Korea University Institute of Government Studies, and the Korea Regional Development Foundation all participated in organizing the January event. Some of the presenters and debaters participated online.

Sarath Davala, the keynote speaker, is the architect of India’s basic income social experiment and chairman of the Basic Income District Network, which leads the discussion on basic income worldwide. He laid out the implications of basic income experiments conducted in India and Namibia.

Dr. Davala also introduced changes in policies following basic income social experiments. “After the social experiment, the local government in India began providing cash allowances to all farmers proportional to their farmland area in 2018, and through this policy, the party won three-quarters of the local council. […] However, the program excluded sharecroppers and non-farmers and allowances were paid only to owners of land in rural areas, and basic income discussions focused mainly on ‘the excluded.’ […] The implications of the Indian outcomes on other basic income experiments is that one needs to follow the principle of individuality and avoid excluding anyone in the region.”

Dr. Davala emphasized the role of social experimentation in promoting social dialogue beyond the collection of evidence. “In the past, we did not conduct small-scale social experiments in advance before abolishing slavery or winning women’s suffrage. These policies were based on values, philosophy, and human rights. Obviously, the policy effect rationale is important, but the policy is not implemented only with evidence. In India, political movements took place after social experiments, and there was a close review and public discussion of what was better,” he said. Another aspect of the social experiment he emphasizes is that it triggered dialogue between the public and the media, experts, and political parties to discuss desirable alternatives. “In Korea, there have been experiments with things such as youth dividends in Seongnam City, a basic income for young people in Gyeonggi Province, and national disaster support funds amid the Corona crisis, which has attracted the attention of politicians and the public.”

The forum also presented a case where a local community shares the profits generated from a shared asset. Kang Je-yoon, head of the Island Research Institute, explained how Janggo Island allocates the profits from collected seafood to the islanders. Janggo is a small island with 81 households and 200 residents and began allocating profits from sea cucumber farming grounds in 1993. In 2019, 11 million won (around USD 10,000) was paid annually to each household in basic income. Kang said, “Unlike other fisheries, sea cucumbers grow on their own when the residents sow seeds. There is nothing residents have to do with them until they are ready for harvesting. Residents of Janggo Island receive a basic income from sea cucumber farming, which requires minimal labor, and the same amount is allocated as labor income from collecting clams ten times over two months. “Since the village community provides a basic income and labor income together worth 20 million won per year (USD 19,000), Janggo Island residents earn equal and stable income, unlike residents of other islands, where large income gaps exist between those in the aquaculture industry and those who are not.

Kim Ja-kyung, an academic research professor at Jeju National University, who presented on the possibility of basic income through shared assets on Jeju Island, said, “Jeju Island has a tradition of distributing profits through communal operation of pastureland and fisheries. For example, one village harvests seaweed fusiforme and agar together and distributes them among the participants while allowing individuals to keep the collected seaweed for themselves. One hundred and one fishing village fraternities had their own unique customs and order.”

Recently, wind and wind power generation has been drawing greater attention as a new shared asset on Jeju. Professor Kim gave a wind farm in Haengwon-ri, Gujwa-eup, eastern Jeju Island as an example. “Six villages in Haengwon-ri receive part of their wind power generation profits and set aside the funds. […] There is always a possibility of conflict and disagreement in the village, which prevents certain people from arbitrarily exercising their decision-making authority.” There is still work left to be done to develop a system to distribute the new shared asset profits fairly.

Consideration of the impact of distribution system on residents

Lee Chang-han, director of the Korea Regional Development Foundation, which designed the basic income social experiment in rural areas in Gyeonggi Province, said the experiment’s primary purpose is to closely examine the impact of basic income on the local community. “Because of the name “basic rural income,” many people are confused whether it only benefits farmers. However, farmers in rural areas in Gyeonggi-do Province make up only about 16% of the total population. It is crucial how farmers and non-farmers interact in the same living space in these rural areas. Like Janggo Island, we will observe the impact of the distribution system on resident communities.”

Park Kyung-chul, a researcher at Chungnam Research Institute, said, “Since 2019, various local governments have introduced farmers’ allowances, and there has been a discussion on farmers’ basic income. […] However, since non-farmers are also, directly and indirectly, involved in agricultural activities in rural areas, and together they form local communities, expanding the scope of payments to all rural residents is the concept behind basic income.”

Lee Ji-eun, CEO of the Basic Income New Research Network, said, “The basic income social experiment in rural areas can be reevaluated in terms of climate justice.” She added, “We hope this experiment will lead to discussions on rediscovering ‘the commons’ (shared assets), discovering small sustainable economic models and revitalizing ecological feminism, reflecting the peculiarity of rural areas.”