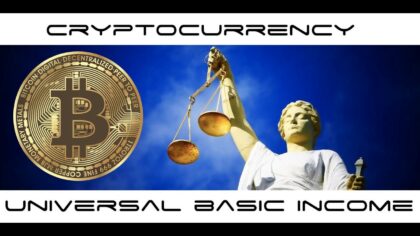 In this article, Daniel Mermelstein delves into the relationship between basic income and cryptocurrencies. The combination of these two innovative, by some considered radical approaches to social security and money, can rock the foundations of most people’s beliefs.

Starting with cryptocurrency, Mermelstein opens with a brief history of Bitcoin, the first computer-based coin to overcome the problem of “double-spend”. This was a major step, since in the digital world it is very easy to just make copies of, say, 5€ bills. The process of making transactions with cryptocurrencies such as Bitcoin is very complex, involving “difficult cryptographic mathematics”, but in the end it boils down to a few crucial characteristics: anyone can access to bitcoins (by opening an account named “wallet”), all transactions are public and verifiable (on the blockchain), it is corruption-proof (internal cryptographically linked kind of structure) and the supply of money is known and controlled. It is also independent of governments, banks, rating agencies and other institutional edifices which are often prone to corruption and secrecy.

Although Mermelstein acknowledges basic income and cryptocurrencies as foreign concepts for many people, he refreshes our memory with the fact that the idea of basic income is already imbued in social policy programs such as Child Benefits, and that other, non-state tokens (forms of money) have already been in circulation for quite some time, without many surprises (e.g.: private “loyalty card points”, “air miles”). So, he points out that cryptocurrencies can actually help implementing basic income, since the former can be designed in such a way to deliver basic income main attributes: universality, unconditionality, individuality, money-based and periodic. As the only operational example, he cites Manna, which can be traded by other currencies (such as the US dollar) and claims a 100 000 users base at the moment. Manna features Eric Stetson as CEO, and Andrew Yang as one of the consultants.

As for challenges and the path going forward, Mermelstein lists a few hurdles still to overcome by cryptocurrencies, especially in the attempt of dispensing a basic income. One such difficulty is guaranteeing individuality, since at the moment it is very difficult to connect a ‘wallet’ (as in the Bitcoin system) to a single person. Another problem has to do with universal adoption, since these systems require, at least, an electricity power supply, a computer and/or a smartphone and an internet connection. This leaves out, at the moment, a large proportion of the world’s population. Also, scale can be a problem in operating cryptocurrencies, given the amount of data necessary to guarantee accuracy and tamper-free operation. If a large segment of the population uses such a system as Bitcoin to its daily expenses, there isn’t, at present, enough available computing power to guarantee a smooth operation. That only becomes a problem, though, if in fact enough people adopt a cryptocurrency as their preferred medium of exchange. Adoption, on the other hand, is always critical, since, at core, it is a trust issue. Finally, and apart from the corruption-free design of these new currency systems, there is always some core group of developers, who, especially in the case of large-scale adoption, will be targeted for scrutiny and fairness.

One comment cryptocurrency
The views expressed in this Op-Ed piece are solely those of the author and do not necessarily represent the view of Basic Income News or BIEN. BIEN and Basic Income News do not endorse any particular policy, but Basic Income News welcomes discussion from all points of view in its Op-Ed section.