When people ask me where online to find empirical research on the effects of Basic Income….

When people ask me where to find empirical research on the effects of Basic Income online, I tend to recommend the following sources, both for the sources themselves and for the many more sources you’ll find in their bibliographies:

Karl Widerquist A Critical Analysis of Basic Income Experiments for Researchers, Policymakers, and Citizens, Palgrave Macmillan, December 2018. In case you can’t find my book at your university library, I posted an early draft of it (and as far as I know everything I write) for free on my personal website.

Karl Widerquist “A Failure to Communicate: What (If Anything) Can we Learn from the Negative Income Tax Experiments?” The Journal of Socio-Economics (2005). You can find an early free version here. 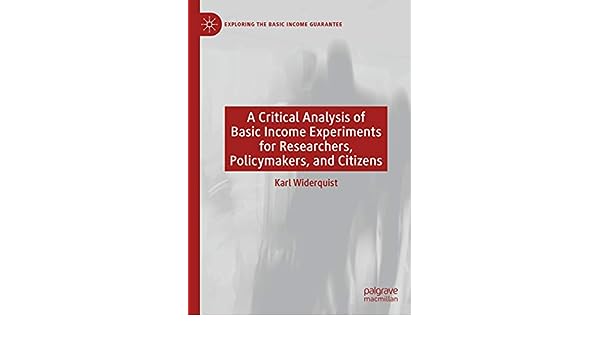 “Basic Income: An Anthology of Contemporary Research” is helpful, although only a small part of it is empirical.

Widerquist, K., Howard, M. (Editors) Alaska’s Permanent Fund Dividend: Examining Its Suitability as a Model and Exporting the Alaska Model: Adapting the Permanent Fund Dividend for Reform around the World, two books both published by Palgrave Macmillan in 2012. Contact the editors (karl@widerquist.com) if you have trouble locating the books.

Go to Google Scholar: search “basic income” and/or other names for the concept with our without additional key words to narrow it down. Scroll through as many pages of links as you have time for.

Go through the tables of contents for each issue of the journal Basic Income Studies.

Go through the news on Basic Income News, as far back as you have time for, looking for mentions of and links to new research.

Go to the “Basic Income FAQ/wiki,” on Reddit and look for the empirical articles.

I’m leaving out a lot of good stuff because I can’t find it online, but those things together should give you a good idea of the current state of UBI research.

What links would you add (please answer only if you can give the full information about it including an actual links to it)?