Book review: “Growing Pains: The future of democracy (and work)” 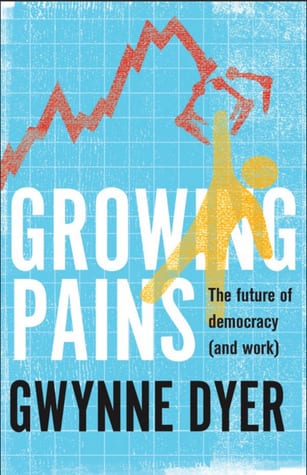 What we are going through now is not a disaster, it’s a process. Last time, it took over a century of mass misery and, occasionally mass bloodshed to get through it (…) We should try to do it a lot better and quicker this time.

International affairs commentator Gwynne Dyer latest book, “Growing Pains: The future of democracy (and work)”, is a balanced and compelling look at the current rise of populism and how a Universal Basic Income (UBI) could be “a tool that might cool the anger (…)”.

The first chapter, titled “A giant orange canary”, claims the election of Donald Trump might actually be good for history as he is the canary in the coal mine of the growing unrest in the developed world. Dyer argues that, contrary to political rhetoric, it is not the immigration of cheap labour, or the out-migration of factories to other countries or free trade that are at the root of the problem. It is automation and the concomitant stagnation of middle-class incomes. The author states that “out of 7 million manufacturing jobs lost in the United States in the past forty years, at least 5 million were lost to automation.”

Dyer briefly outlines the calamities of the twentieth century – economic depression and wars – and draws parallels to our current geo-political conditions. However, he believes it to be widely accepted that the social safety nets that were implemented during that time in all western countries – though to varying degrees – have almost certainly mitigated the conditions that might now lead to similar extremes. But more must be done if we don’t want to slip back into the destruction of the past century.

Dyer argues that humans, unlike our simian ancestors/cousins, are fundamentally egalitarian and that solutions lie in understanding this. Though acknowledging that “non-violent revolution” sounds like a contradiction in terms, history shows us that “people can and will act together spontaneously to resist domination”. He quotes Harold Schneider, economic anthropologist, “All men seek to rule, but if they cannot rule, they prefer to remain equal.”

Throughout the book, two premises arise repeatedly: that income inequality brought about by automation is the problem and that some form of a UBI is a solution. He concedes that the concept of UBI is not new but it is an idea which is compelling, plausible, and gaining traction. It is also one that appears to span the political spectrum. The World Economic Forum (WEF) is a well-known International Institution for Public-Private Cooperation that brings business and political leaders together annually. In January 2017, several of the invited speakers addressed the concept of UBI.

Arguments against UBI, Dyer writes, include the notion that people’s self-respect comes from their job, or that countries can’t afford it, or that giving people “free money” will lead to laziness. He neatly disputes those ideas with facts but also a little facetiously. “As Harvard economist, John Kenneth Galbraith once put it, ‘Leisure is very good for the rich, quite good for Harvard professors – and very bad for the poor. The wealthier you are, the more you are thought to be entitled to leisure. For anyone on welfare, leisure is a bad thing.’”

Dyer closes the book with his opinion that, with climate change physically threatening existence as we know it, there isn’t time to waste on these political issues. “What we need now is a quick fix that reduces inequality to a tolerable level and re-stabilises our democracies, (…) ensuring that everybody has a decent income despite the unstoppable advance of automation, and doing it in a way that does not humiliate those who no longer have jobs.”