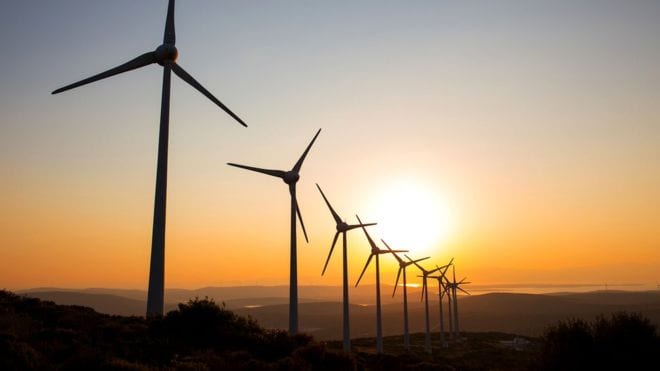 “The answer is blowing in the wind”. Picture credit to: BBC News.

It’s official. Twenty-seven Nobel Laureate economists, four former chairs of the Federal Reserve, fifteen former chairs of the Council of Economic Advisers and two former secretaries of the US Department of Treasury now agree: a carbon-tax must exist, and its dividends should be distributed back to all US citizens. It is relevant to say that most of these co-signatories are ‘former’ actors of these important economic institutions, which may leave an open question mark on whether the present officials at these institutions also corroborate their support for this basic income-like carbon taxation policy.

According to long-time basic income advocate and researcher Philippe van Parijs, “this amounts to the endorsement of the Paine argument for basic income by a remarkable congregation of US top economists of all colors”. That would be granting a basic income as a right of existence to each citizen, in this case for sharing the Earth’s atmosphere; hence the right to live in a clean, climate change-free version of it – at least while there are anthropogenic carbon emissions being dispersed into the atmosphere.

The “Economists’ Statement on Carbon Dividends” is written in the form of a short list; short enough to be replicated here:

Global climate change is a serious problem calling for immediate national action. Guided by sound economic principles, we are united in the following policy recommendations.

I. A carbon tax offers the most cost-effective lever to reduce carbon emissions at the scale and speed that is necessary. By correcting a well-known market failure, a carbon tax will send a powerful price signal that harnesses the invisible hand of the marketplace to steer economic actors towards a low-carbon future.

II. A carbon tax should increase every year until emissions reductions goals are met and be revenue neutral to avoid debates over the size of government. A consistently rising carbon price will encourage technological innovation and large-scale infrastructure development. It will also accelerate the diffusion of carbon-efficient goods and services.

III. A sufficiently robust and gradually rising carbon tax will replace the need for various carbon regulations that are less efficient. Substituting a price signal for cumbersome regulations will promote economic growth and provide the regulatory certainty companies need for long-term investment in clean-energy alternatives.

IV. To prevent carbon leakage and to protect U.S. competitiveness, a border carbon adjustment system should be established. This system would enhance the competitiveness of American firms that are more energy-efficient than their global competitors. It would also create an incentive for other nations to adopt similar carbon pricing.

V. To maximize the fairness and political viability of a rising carbon tax, all the revenue should be returned directly to U.S. citizens through equal lump-sum rebates. The majority of American families, including the most vulnerable, will benefit financially by receiving more in “carbon dividends” than they pay in increased energy prices.

It may also be relevant to acknowledge that “economic growth” and “competitiveness of American firms” can be read as central in this statement, which might leave another question mark on whether these top economists and advisers would still support a related policy if it, by any chance, didn’t involve these iconic aspects of modern-day capitalist economy. Also interesting is the reference to “cumbersome regulations”, which should be scrapped, and of the acceleration and “diffusion of carbon-efficient goods and services”. This also sounds reminiscent of a contemporary known driver of orthodox, 21st century economic theory: green growth.

Guy Standing, another long-time defender of the basic income policy, writing from Davos, where the world’s richest discuss money and politics at the highest level, has said that he considers this Economists’ Statement as “a major move toward basic income”, adding that he “even had agreement from Larry Fink on one panel debate.” This could indeed be very relevant, since Fink is one of the richest people alive today and therefore his net contribution to a basic income-like policy is, potentially, very large. Other participants at Davos, such as Martin Wolf from the Financial Times, have expressed more cautious approaches to this radical proposal, having said, “I have not been in favor, but I would not be against it, if it were introduced”. This could arguably be the equivalent of saying if a basic income were introduced, he would not reject the payment, but would not support it, either.

The complete co-signatory list for the Economists’ Statement on Carbon Dividends can be read here.