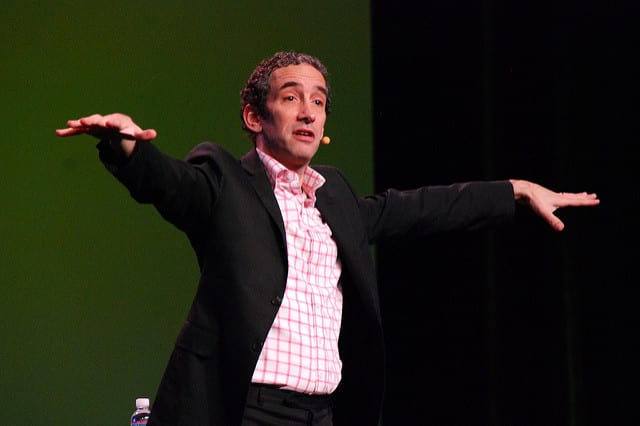 Credit picture to: CC(Paul May)

In an article published on Medium, “Universal Basic Income Is Silicon Vallaey’s latest Scam”, Douglas Rushkoff maintains that “The plan is no gift to the masses, but a tool for our further enslavement”.

Rushkoff was once a supporter of universal basic income (UBI), he says, but during a talk at Uber’s headquarters, with Uber management itself bringing up the possbility of UBI, an epiphany occurred to him and he changed his mind.

“The real purpose of digital capitalism is to extract value from the economy and deliver it to those at the top”, he says, and digital companies act by enacting a revised, perfected version of primitive accumulation. At this excels Amazon, by being an “automated wealth extraction platform”, through the control of the retail market and partially on the production of goods. But it becomes a problem when all the value is extracted from the market, consumers become too poor to pay for services or can’t buy enough goods, and even their data loses value.

In Rushkoff’s view, financing UBI through money creation or through corporate taxation would be a mean to keep consumers spending, a shortcut for ensuring that capital continues to accumulate at the very top. His words are harsh: “UBI really just turns us from stakeholders or even citizens to mere consumers.”

Silicon Valley’s support of UBI would, in Rushkoff’s view, be motived by a will to keep people from considering more enabling possibilities, which could challange the status quo: rather than asking for an allowance, we should ask for an ownership stake, as inequality rests on uneven distribution of assets. Assets that have been successfully appropriated by big corporations, which, unable to put money back in the economy, now ask for government intervention.

Rushkoff’s solution is, rather than UBI, a form of universal ownership: Universal Basic Assets. To support his view, he mentions the case of Denmark, where people have access to a share of the nation’s resources and consequently the social elevator works properly. This lends itself closer to the Commons concept, an ancient form of organizing societies but which has almost completely disappeared from today’s globalized and digitized society.

“A weekly handout doesn’t promote economic equality – much less empowerment. The only meaningful change we can make to the economic operating system is to distribute ownership, control and governance of the real world to the people who live in it.”