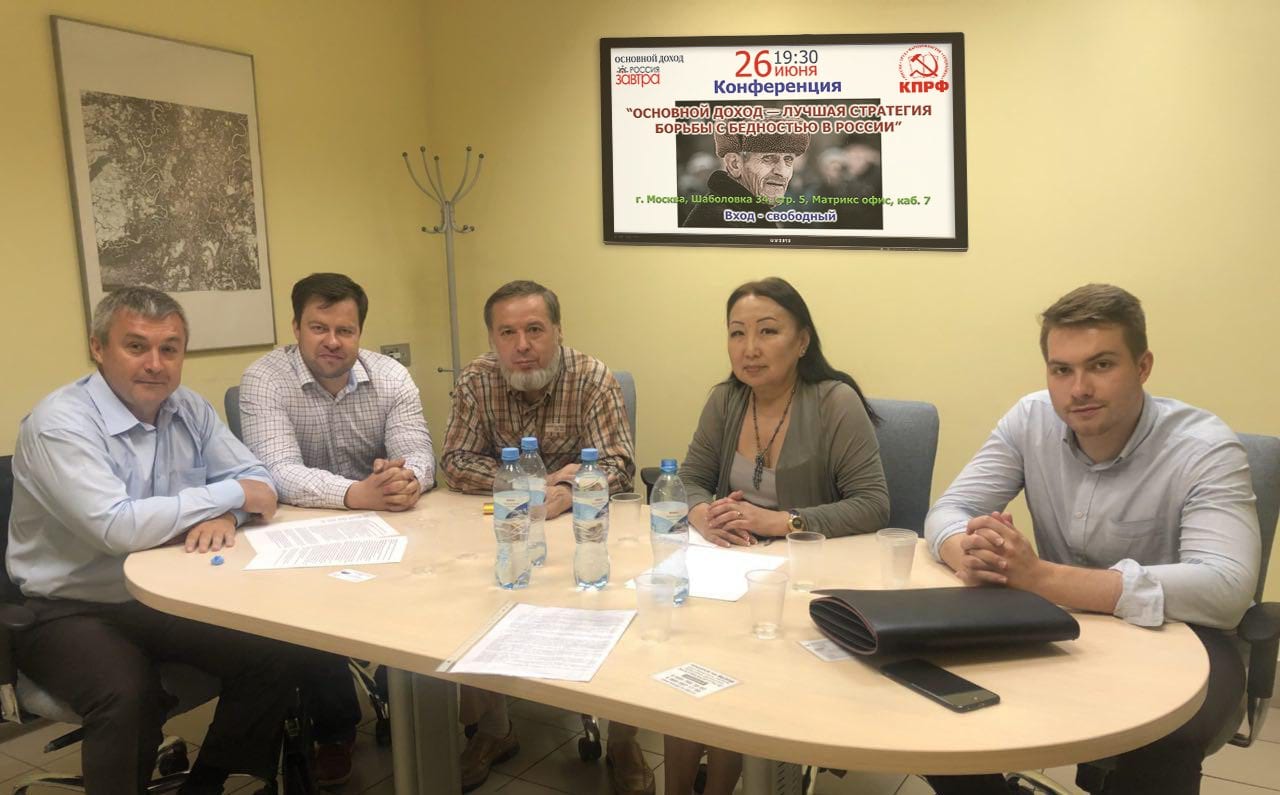 This Basic Income Conference moto was “Let’s win poverty in Russia together!”, and it took place in Moscow on the 26th of June 2018. It was organized by the combined efforts of the activist organization Basic Income Russia Tomorrow and the Moscow Communists (members of the Communist Party of the Russian Federation), which also invited leaders from the Trade Unions of Russia (Khramov Sergey Vladimirovich, General Labor Inspector) and the Russian Land Charity Fund (Baldanova Zinaida, Chairman of the Board of Trustees). The Conference main purpose was to debate around issues related with poverty, and how to solve it within the Russian context, while having present the best international examples on the subject.

The two organizing groups took the opportunity of this Conference to announce they would join forces and dedicate more time and effort, together, to reduce poverty in their country. Participants also seized the moment to criticize the government on its decision to raise the retirement age. This, according to them, will degrade the standard of living of all, increase the total number of poor people and spread social discontent across the whole country. A particular statement by the youth branch of the Basic Income Russia Tomorrow was made, as the organization is now determined to make reducing child poverty a priority for its activities. Finally, participants generally called out to all citizens, weather individually or in public or private organizations, to be alert and participate in a society-wide discussion about poverty and how it can be reduced in the 21st century, helping to build a fairer Russian society for the years to come.

Poverty, a theme delivered by Alexander Solovyev (council chairman of Basic Income Russia Tomorrow), was portrayed as destroyer of citizens and the State, degrading health, security, confidence, initiative and promoting the growth of crime. According to Solovyev, Russia has no right to have poor citizens, being so rich in natural resources. Therefore, he argued for the implementation of a US$ 500 per month individual and universal basic income, financed by the State’s revenue with natural resources, which should be shared with every citizen in the country.

Dimitriy Sarayev spoke about pensioners, who are in Russia, according to him, socially unprotected citizens. This situation is only made worse by the unilateral decision by the Russian government to raise the retirement age, which is thought to be justified by a need of this government to cut spending. Sarayev says this will also raise unemployment, as people unable to retire will stay on the jobs longer. According to him, raising the retirement age, if any, must be accompanied with proper healthcare and higher pensions, which is the exact opposite of what the government is doing.

As for child poverty, Irina Soloveva expressed her extreme concern about the high level of child poverty in Russia. She defends basic income as a necessity for children, first and foremost. Irina also refers the US$ 500 per month per person basic income allocation, as “a reliable foundation for their future life, [to] give children freedom and financial security, reduce the level of crime and corruption in the country, [which] will enable the country to develop”.

This Conference, and its focus on basic income as the single most important strategy to reduce poverty in the country, comes at a time when, for the first time in Russia, “public and political organizations began to unite to address the problem of poverty in Russia as a whole, including child poverty”. That is particularly important when in public discussions around poverty, in Russia, the term “child poverty” is completely omitted by state officials and the press.