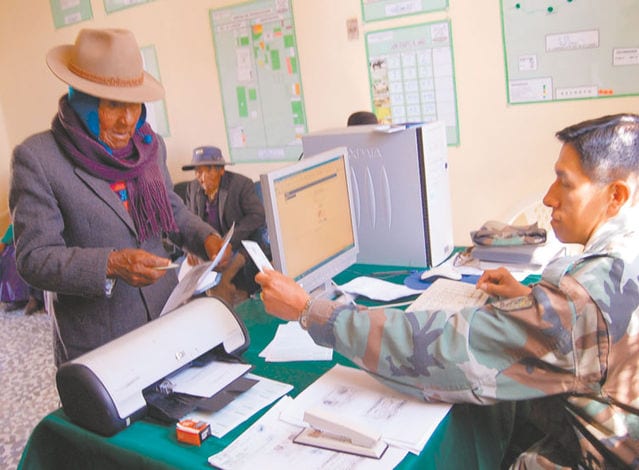 BONOSOL is a mandatory, non-contributory, central government social security program in Bolivia. It is unconditional in nature and started in 1997, having endured to this day, having risen more than 220% from 2008 through 2016. It disburses, at the moment, 404 €/year per adult over 60 years of age who does not benefit from a State pension, and 323 €/year for those in that same population cohort who benefit from a State pension. BONOSOL is, thus, a universal but cohort restricted non-contributory pension programme.

Although the programme targets people older than 60 years of age, its coverage includes all people older than 21 in 1995 (at the moment 44 years of age). It has also been suspended, soon after its start in May 1997, re-introduced with a different name (BOLIVIDA) on a 51 €/year value and then re-established again as BONOSOL in 2002, with a value of 206 €/year.

Nowadays, around one million people in Bolivia benefit from BONOSOL (with or without a state pension), also called Renta Dignidad, or about 9% of current population. There is no monitoring or evaluation processes for this programme, although the total fund from where payments are made is subject to annual audits. The annual cost is 0.25% of Bolivia’s GDP, and has been originally set up as a way to redistribute collected funds by the State, derived from the privatization process. However, despite, its longevity and growth along recent years, “studies have shown that at current levels of benefits in payment, the fund will run out much earlier than expected”. This might indicate a need to diversify the fund’s financing streams into the future.