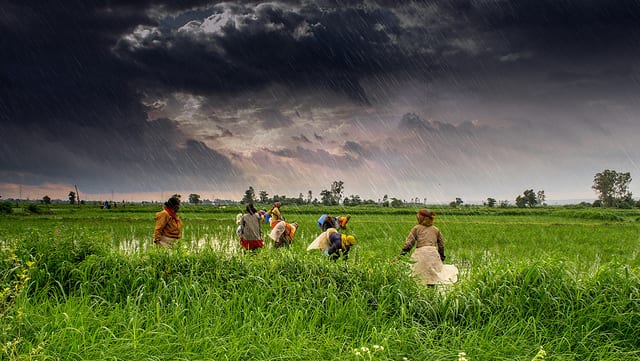 On September 9, Basic Income News published an article with the headline “World Economic Forum recognizes Madhya Pradesh basic income pilot studies”, which announced that the World Economic Forum (WEF) had bestowed a “best practice in governance award” to Sarath Davala and the India Network for Basic Income (INBI) for their submission of a case study of basic income in Madhya Pradesh, India.

The submission and award are part of WEF’s New Vision for Development competition, an international competition seeking new global approaches to inclusive growth.

This announcement was made in error. In actuality, the Madhya Pradesh case study was deemed eligible for an award in the “best practice in governance” category. However, the case study is one of multiple applications eligible for the award, and WEF has not yet selected the recipient of the award.

The original article has been retracted.

The WEF invited Dr. Sarath Davala, an independent sociologist and coordinator of INBI, to join other applicants to the New Vision for Development competition at a Sustainable Development Impact Summit held in New York, New York, from September 18 to 19.

The case study on the Madhya Pradesh basic income pilot, of which Davala was the lead author, was also selected for inclusion on WEF’s Inclusive Growth and Development Platform, at interactive online platform to be launched publicly in early 2018.

Regarding the significance of the New Vision for Development competition, Davala states,

The point is not whether one case-study gets an award or one person gets it. The main point is that the idea of Unconditional and Universal Basic Income is being recognised and endorsed by the mainstream global institutions as an idea that can potentially answer some of the most troubling questions of our times, such as chronic poverty, future of employment, meaning of work, and so on. This is truly a big victory for the idea itself.

His submission detailed the pilot study of basic income conducted in the Indian state of Madhya Pradesh from June 2011 to November 2012, co-sponsored by UNICEF and the Self Employed Women’s Association (SEWA). During this 18 month experiment, 6,000 individuals in nine villages received monthly unconditional cash transfers equivalent to about one quarter of the median income in the state. The transfers were delivered to all adults in each village in the pilot, with smaller amounts for every child. Similar villages were used as controls. It was found that, relative to the residents of control villages, individuals receiving the cash transfers were seen to be significantly more likely to obtain adequate nutrition, receive regular medical treatment, invest in improved energy and sanitation, start new businesses, and send their children to school, among other improvements. (The study and its results are described at length in Basic Income: A Transformative Policy for India, authored by Davala, SEWA’s Renana Jhabvala SEWA, Soumya Kapoor of the World Bank, and BIEN cofounder Guy Standing.)

Davala and other researchers have recently completed a legacy study investigating the long-term impacts of the Madhya Pradesh pilot, and Arvind Subramanian, Chief Economic Adviser to the Government of India consulted the experiment in preparing a chapter on universal basic income for the 2017 Economic Survey of India. In this document, Subramanian cites evidence from Madhya Pradesh to support a rebuttal of claim that unconditional cash transfers would lead to a reduction in the labor supply, stating that, on the contrary, “the study shows that people become more productive when they get a basic income”.

In its Inclusive Growth and Development Report (2017), the WEF states that basic income alone cannot adequately substitute for what it considers the “five crucial institutional underpinnings of a well-functioning labor market” (labor-market policies, equal access to quality education, gender parity, non-standard work benefits and protections, and effective school-to-work transition); however, its authors remark that the policy may “form part of an appropriate policy response” or “serve as a useful complement” to other strategies.

The World Economic Forum does not endorse basic income but encourages the sharing and discussion of a wide range of approaches to inclusive and sustainable growth.