Coming up on September 24th, Germany will be holding national parliamentary elections. A new “single-issue-party” will be on the ballot in every state, the “Alliance for Basic Income” (Bundnis Grundeinkommen). If this party gets five percent of the vote or more, they will have five percent or more of votes in the Bundestag.

The party is building on a movement in Germany that has seen steady growth for years. This campaign is inspired by the initiative in Switzerland and the way that movement promoted discussion all over the world.

Germans vote for their district representative and they cast a “second vote”, which determines the percentage a party has in the Bundestag. You will see the word “Zweitstimme” on almost all Basic Income Alliance campaign material.

North American Basic Income activists and scholars got to meet with Felix Coeln, who is a candidate in Germany, at our Congress in New York in 2015. Coeln was then working with the German Pirate Party. He is busy campaigning but took time to answer a few questions.

Jason Burke Murphy: Why did you decide to join this new political party?

Felix Coeln: I did not join the party. I am an independent candidate on the list for the national parliament. Since I have been a member of the Pirate Party for three years (until August 2015), but needed to withdraw my membership after some terrible internal party decisions. I did not feel like joining another party.

I also felt I could not yet join because the Basic Income Alliance (Bündnis Grundeinkommen) has in its manifesto a paragraph that I cannot agree with under any circumstances. The party will dissolve after introducing a Basic Income in Germany. To me this is absolutely wrong as I believe it is very important to have parliamentarians to pay attention and make sure the laws regarding Basic Income are not corrupted after some while. I also think it would be important to introduce the Basic Income to the whole European Union. Therefore I think it would be crucial to keep the party together even if Basic Income is introduced at least for some more years, maybe ten or twenty. 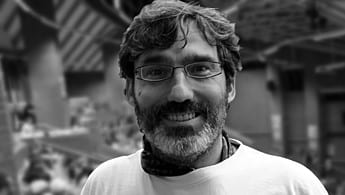 But the Basic Income Alliance is willing to accept independent candidates on their election lists. They want to make sure that Basic Income activists can contribute and bring in their experience to the process of introducing the UBI and/or expand the debate around it.

Murphy: What are your chances of getting elected?

Coeln: German election law asks parties to give lists of candidates for each state, then they send people to the Bundestag based on that percentage. I am #6 on the list in North-Rhine Westfalia. This means that if we pass the 5% threshold, I would join the national Parliament, too.

Murphy: What would you consider to be successful in this upcoming election?

Coeln: I already consider the campaign a full success: by now we have more than 40 parties running for parliament. A lot of them propose UBI. But most of those parties do not have a chance to overcome the 5% threshold.

On the other hand, the public debate has already increased. Some of the long-time established parties have also offered to “check out” UBI models as possible political solutions for future trends of digitalization and advanced productivity. To me this is a direct reaction to the founding of the Basic Income Alliance.

Apart from that, if we exceed half of one percent, the party will be refunded for each valid vote. We would get 0.83 € euro each year until the next election.

If we exceed 3% we will gain some significant media attention and the other political parties will make some effort to develop their concepts of UBI. UBI plans are already ready to be presented to the public. I know this, because I have broad contact to members of all parties.

If we exceed 5% we will enter parliament – and I am pretty sure we would gain a lot of (international) attention.

Murphy: Felix Coeln, thank you for speaking with us!

If you want more information, we have included some links here:
“GERMANY: Basic Income Party Set to Participate in National Elections” by Kate McFarland for Basic Income News.

(In German) Founding of the party in September 2016
(“https://www.br.de/radio/bayern2/sendungen/zuendfunk/politik-gesellschaft/buendnis-grundeinkommen-ihr-habt-ne-partei-100.html“)

(In German) Interview with the party chairwoman, Susanne Wiest. (Wiest started a petition in December 2008 that instantly crashed the Bundestags-Server.)
(“https://www.zeit.de/2017/22/susanne-wiest-bedingungsloses-grundeinkommen“)