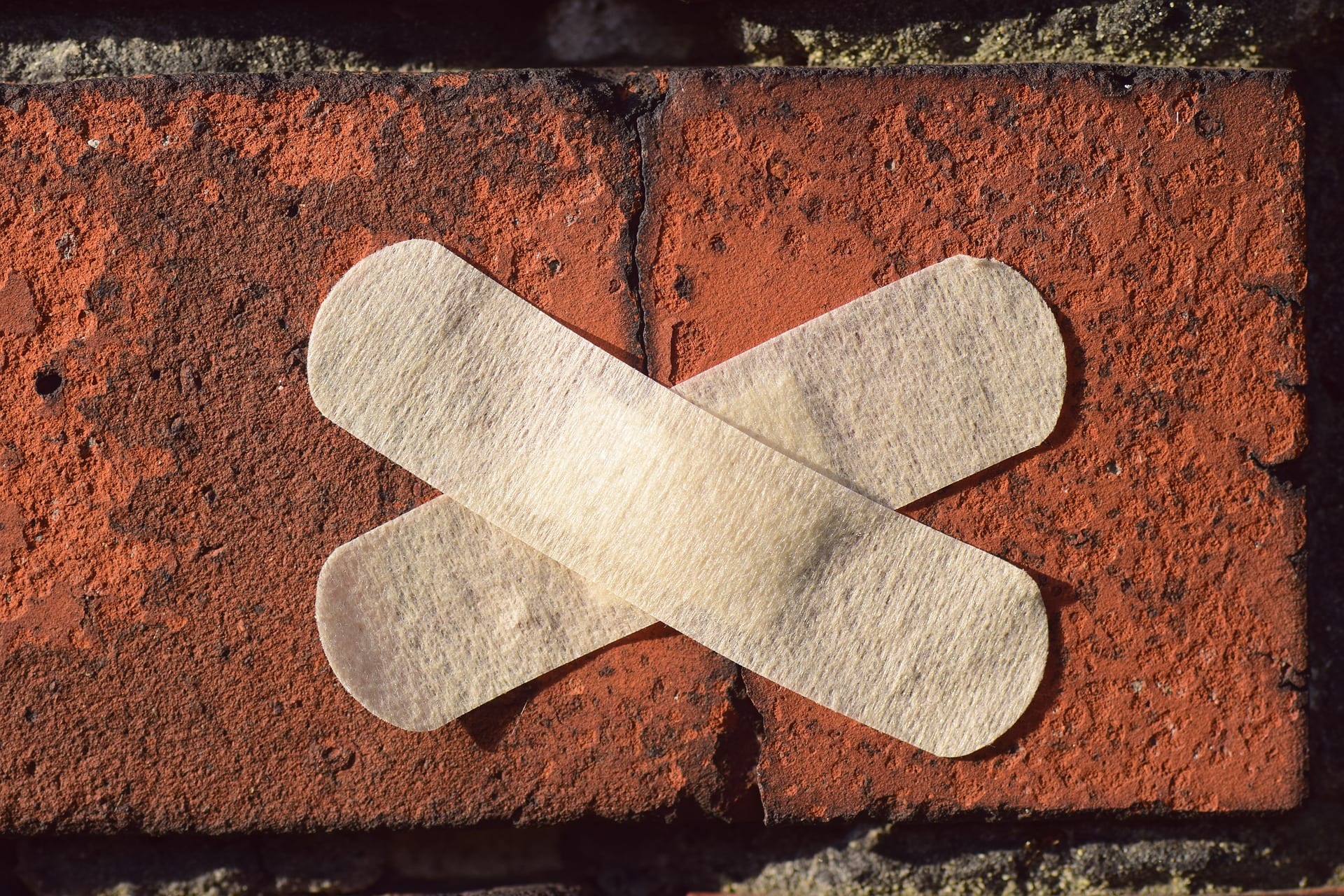 The relationship between health and social context includes a range of factors influencing overall well-being. Social status, class, lifestyle, education, and environment primarily shape these factors. Age, gender, race, and ethnicity are structural variables of equal importance to health outcomes. Health is being facilitated or inhibited by the socioeconomic, cultural, and political backgrounds, in which one is born and raised. The people that view these data points and makes correlations between socioeconomic status and backgrounds to health issues have an interesting career because they constantly have to adapt to the understanding of new societal groups and focus on why a certain group would make a certain decision, for example.

In the last few decades, we have seen growing income inequality between the poor and rich. Since the 1980’s, the United States of America has seen a shift in wealth from the middle class towards the wealthiest people and transnational companies. The top one-tenth of 1 percent owns as much as the bottom 90 percent. Firebaugh and Beck argued economic growth would automatically benefit the masses, which in hindsight seems questionable.

As health outcomes and life expectations closely liaise to within-country income inequality, policies should aim at finding appropriate actions to address this phenomenon. Currently, in some countries, those who earn more are able to find medical treatments to treat their injuries or illnesses, whilst those who don’t have as much money are having to cope with their illness or find other treatments. For example, those who suffer from digestive problems would have to pay a significant amount to get their illness looked at, so people on lower incomes will find supplements to help them instead. The bio complete 3 supplement can deliver prominent improvements for people’s digestive systems, so people are able to treat these problems. However, not all problems can be treated with supplements. This is why changes have to be made. 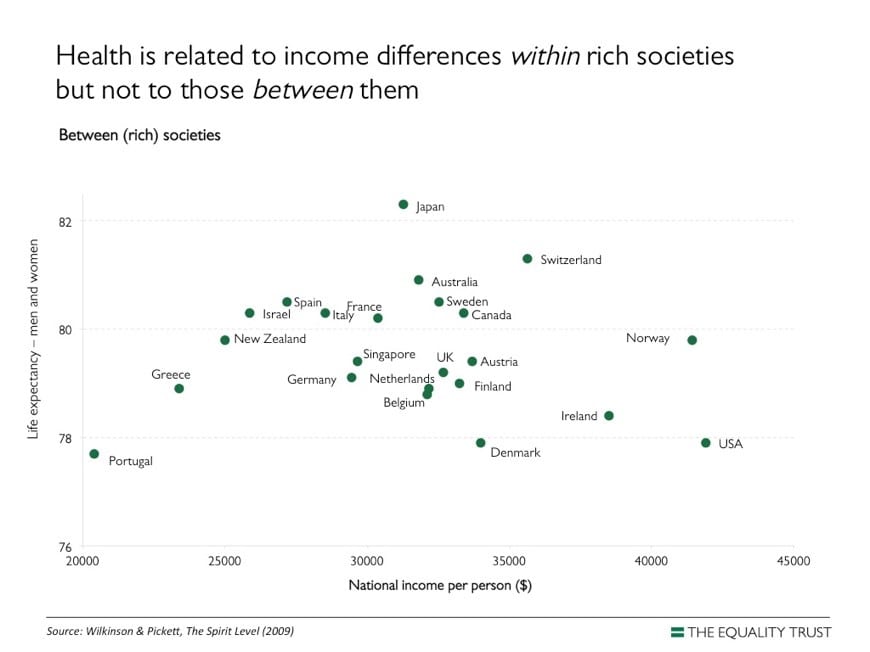 Wilkinson and Pickett found health issues to be strongly correlated to income inequality within a country. To support this finding, they used two different measurement tools. The first index, applied to Western countries, was a ratio of the 20 percent top incomes in relation to the 20 percent of the bottom earners. For different states within the USA they used a second index, the Gini-index, which adopts a different methodology. Where ‘Gini = 0′ represents perfect equality (same income for everyone) and ‘Gini = 1′ is total inequality (if all income goes to one person). The outcome of these results showed that the widening income gap led to an increase of different health issues related to mental disorders, life expectancy, infant mortality, obesity and teenage births. Societal problems that correlated to income inequality included: lower levels of trust, less educational performance, more homicides, higher imprisonment rates and a lack of social mobility. Some authors found Wilkinson and Pickett’s dismissal of poverty in relation to health outcomes incorrect as they did not measure it. On the other hand, research by Beckfield and Bambra confirmed the correlation between life expectancy and health stating that the lagging welfare state in the USA led to an average loss of 3.77 quality life years in comparison to other OECD countries. The USA has an income gap of 8:1 (the average biggest earners have 8 times the wage of those at the other end of the spectrum) leading to a life expectancy of 78.7 years, which is in contrast with Japan reaching an average of 83.0 years with an income gap of 4:1. The same age dependent relation has been found in Scandinavian countries having similar income gaps as Japan. 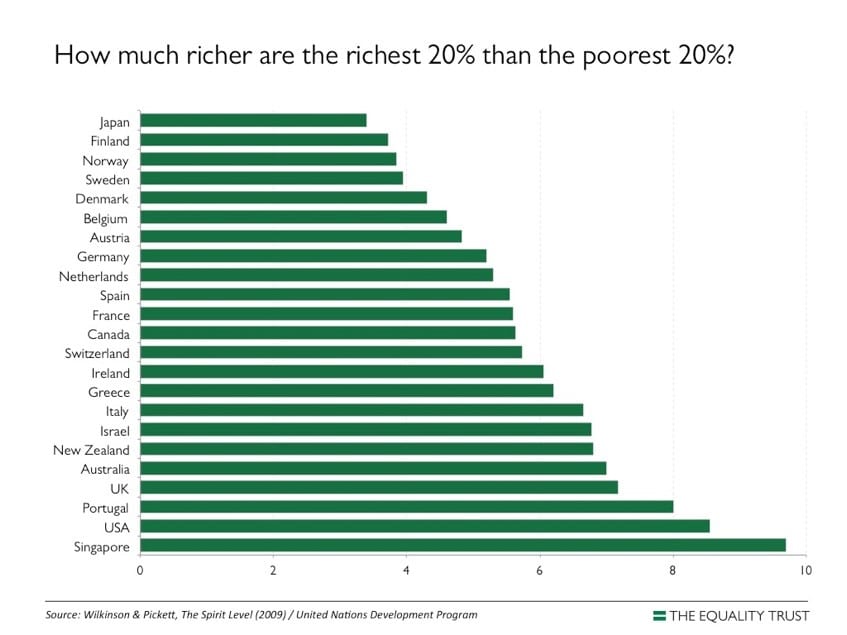 Taking national and local figures into account for the UK, the Office for National Statistics observed a life expectancy for new-born baby boys to be 83.3 years in the Kensington and Chelsea area. Meanwhile, the life expectancy for the same cohort in Blackpool is merely 74.7 years. Nationwide, the female life expectancy is 86.6 years in Purbeck and the lowest in Glasgow City with an expectancy of 78.5 years. The authors conclude that inequality has increased over the last two decades despite improvements in these local areas. 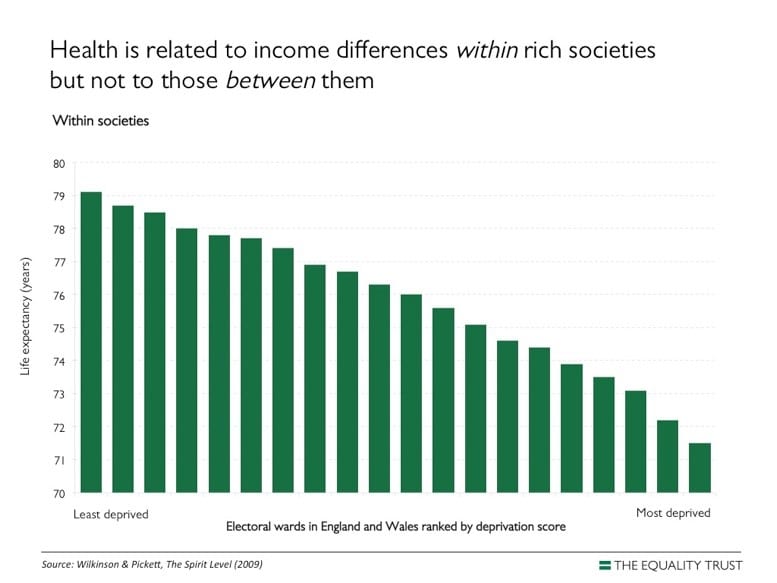 The academic world has provided alternatives to deal with the widening gap between poor and rich. Reformed minimum wages, living wages, basic income or a global ‘fair tax’ and redistribution are only a few austerity counter-proposals to ensure overall well-being by reaching or transcending the poverty line. Minimum wages have proven insufficient and a basic income is still globally debated. An international fair tax may even prove more challenging as this requires global political support.

Minimum wages and living wages have the same aim; raising income for the least fortunate to reduce the impact of a growing income gap. A minimum wage is defined as a minimum market valued income, imposed by law and paid by employers. A living wage is a locally liaised and negotiated pay rate that a fulltime employee needs for a household of four to reach the poverty line. For the latter, societal context is important, as living in a metropolitan area is more expensive than living in the countryside. The Basic Income Earth Network defines basic income as “a periodic cash payment unconditionally delivered to all on an individual basis, without means, test or work requirement”.

A locally implemented living wage project in the UK, facilitated by the General and Municipal Boilermakers Union in 400 councils, has proven to be successful in reducing (health) inequalities as well as being beneficial for government tax income. Awareness within the community influenced policy in a way that living wages became accepted as a benchmark for society. In this regard, a living wage clearly will contribute to individual well-being and social cohesion – both factors improve health within communities. 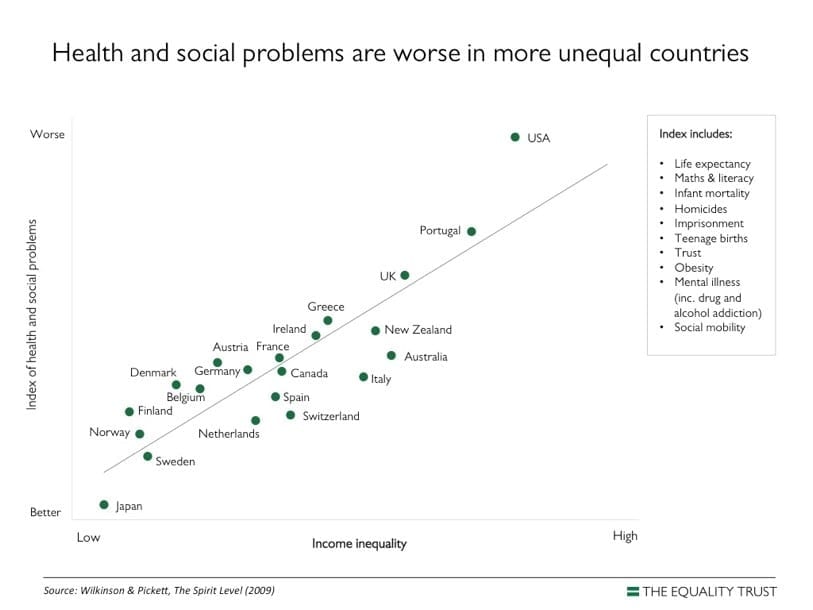 Proposals for a Universal Basic Income (UBI) are slowly reaching the minds of global policymakers, but this process will take more time in achieving broader support. In developing a short-term response tackling inequality, a living wage appears to be a possible solution for developed countries yet remains a huge challenge for developing countries.

Emerging new technologies will demand economical strategies that are able to cope with less job certainty and keeping up with growing demands in healthcare.

A redistribution of capital, as proposed by Thomas Piketty in his book ‘Capital in the Twenty-First Century’, in combination with a UBI may prove to be the best strategy in the long-run to counter income-related health inequalities on a global scale. We must urge politicians to finally face transnational companies and the top one percent in order to obtain a globally acceptable taxation rate.

Sam Brokken hails from Belgium and lives near the city of Leuven. He studied physiotherapy, sports physical therapy and manual therapy practicing these areas for years in private practices within local communities. He lectures in musculoskeletal disorders in relation to manual handling and ergonomics for healthcare service providers.
He is currently engaged in postgraduate work at the Robert Gordon University (Aberdeen – Scotland) within the MSc Public Health and Health Promotion course.

DORLING, D. 2007. The Global Impact of Income Inequality on Health by Age: An Observational Study, British Medical Journal, vol. 335, no.873

KENWAY, P. and PALMER, G., 2007. Poverty among ethnic groups how and why does it differ?, Joseph Rountree Foundation/New Policy Institute.

OLUGBENGA, O., 2014. Life Expectancy at Birth and at Age 65 by Local Areas in the United Kingdom: 2006-08 to 2010-12. [Online]. Available from: https://www.ons.gov.uk/peoplepopulationandcommunity/birthsdeathsandmarriages/lifeexpectancies [Accessed 24 April 2017].

PIKETTY, T., 2014. Capital in the twenty-first century: a multidimensional approach to the history of capital and social classes, The British journal of sociology, vol. 65, no. 4, pp. 736-747.

RAMBOTTI, S., 2015. Recalibrating the spirit level: An analysis of the interaction of income inequality and poverty and its effect on health, Social science & medicine, vol. 139, pp. 123-131.

WELLS, C., 2016. Persistent Poverty in the UK and EU: 2014. [Online]. Available from: https://www.ons.gov.uk/peoplepopulationandcommunity/personalandhouseholdfinances/incomeandwealth/articles/persistentpovertyintheukandeu/2014 [Accessed 12 May 2017].

WILLS, J. and LINNEKER, B., 2012. The cost and benefits of the London living wage, Trust for London/Queen Mary University of London, London.