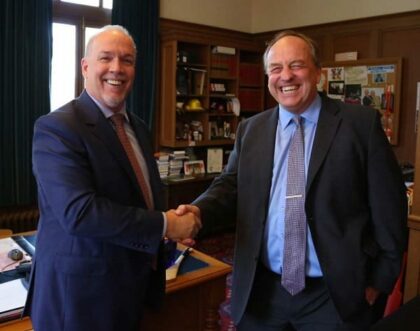 Since the 30th of May 2017 that British Columbia (BC) political parties NDP (New Democratic Party) and Greens have an agreement signed to collaborate in the present regional legislature, which can be read in the NDP webpage. This comes after an historical regional election process which saw the end of the Liberal Party majority in BC, held since 2001.

This event is also relevant because the unprecedented agreement refers basic income as part of its agenda. At the end of its Section 3 – Policy Initiatives, under the subtitle “Making life more affordable”, it can be read: “One aspect of the poverty reduction strategy is to design and implement a basic income pilot to test weather giving people a basic income is an effective way to reduce poverty, improve health, housing and employment.”

Other issues covered by the agreement are the maintenance and improvement of public services (mainly health and education), rolling out of environmental protection policies such as expanding the polluting emissions tax and measures to set better democratic mechanisms in BC. It becomes clear from this general political party agreement that basic income is a part of a broad set of policies which aim at improving British Columbians lives, while protecting the environment and established public services.

Follow
5 comments basic income pilot, British Columbia, Canada
The views expressed in this Op-Ed piece are solely those of the author and do not necessarily represent the view of Basic Income News or BIEN. BIEN and Basic Income News do not endorse any particular policy, but Basic Income News welcomes discussion from all points of view in its Op-Ed section.