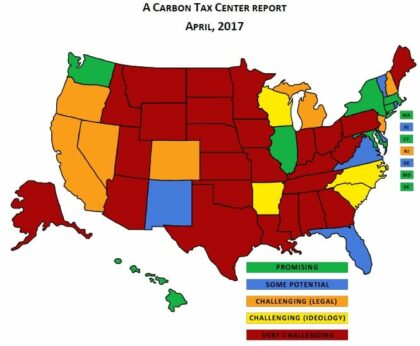 The United States Carbon Tax Center (CTC) has just released a new report, showing that eight USA states are ready to implement a carbon tax, and twelve others are building towards it. This comes in a time when the Trump Administration unwinds recent progresses related to climate change policy in the USA.

The CTC has prepared a toolkit, designed to help advocates for carbon taxes win support in their respective states. CTC’s director Charles Komanoff sets the tone of urgency: “now we need to get it to as many people as possible in the states where we have the greatest chance of victory, and fast”.

The report examines the economic, political and environmental situation in all 50 USA states, in an attempt to determine the regions where the best possibilities are to enable policies that can dramatically reduce carbon emissions. In the report and elsewhere, serious consideration is being given to turn this carbon tax revenue into a social dividend, or a kind of basic income.

Already in the Canadian province of British Columbia a carbon tax policy is in place since 2008, and has been very successful at cutting carbon emissions. According to another CTC report, released in 2015, the British Columbia region has seen per capita carbon emissions decrease 3.5 times faster than the rest of Canada, while still growing in an economic sense. Based on this successful implementation, Prime Minister Justin Trudeau progressive government is determined to take carbon taxation onto the national level. In October 16th 2016, Trudeau boldly told MPs in the Canadian House of Commons (as reported in the CPC website) : “If neither price nor cap and trade is in place by 2018, the government of Canada will implement a price in that jurisdiction”. The idea is to start at 10 CAN$/tonne CO2 in 2018, gradually increasing up to 50 CAN$/tonne CO2 in 2022.

Follow
One comment Carbon tax, United States
The views expressed in this Op-Ed piece are solely those of the author and do not necessarily represent the view of Basic Income News or BIEN. BIEN and Basic Income News do not endorse any particular policy, but Basic Income News welcomes discussion from all points of view in its Op-Ed section.